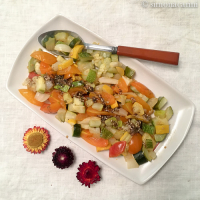 jump to Recipe [versione in italiano] the oven and za'atar turn summer vegetables into a flavorful side dish (placemat by La FABBRICA del LINO) Also called wild thyme, za’atar is an herb typical of the Middle East. Chef Yotam Ottolenghi has this to say about it: [Za’atar] has a distinctive, pungent, savoury aroma. Its scientific name, Origanum syriacum, hints at a connection to oregano, marjoram and the like, but, for me, its flavour evokes cumin, lemon, sage and mint.1 Za’atar is also used to indicate a mix composed of the dried herb, sumac (obtained by grinding the berries of the shrub... Read more →

Flavors from around the world Federico García Lorca1 is one of my favorite poets, so when I came across a novel whose protagonist's name was Lorca, I had to read it: I am glad I followed my impulse. Jessica Soffer's Tomorrow There Will Be Apricots2 is the current selection of our Cook the Books Club. The book brings together a group of people who all carry a heavy burden of pain: the pain of exile from homeland and from motherhood, the pain of an aloof mother and an absent father, the pain of loneliness, abandonment, inadequacy. Food is one way through... Read more → 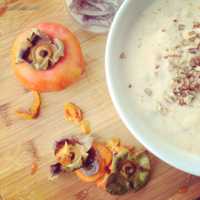 [cliccare il link per andare alla versione in italiano] something sweet & something sour come together in the bowl To celebrate the second stop of our World Culinary ABC, India, I prepared a raita using my favorite fall fruit. Raita is a condiment made with yogurt seasoned with herbs and/or spices (erbe aromatiche e/o spezie). Cucumber (cetriolo) is often added, but I've seen also versions with fruit. I think delicately sweet Fuyu persimmons perfectly balance yogurt's sourness and only a light touch of spices is needed to support the marriage. Print-friendly version of briciole's recipe for Persimmon raita Ingredients: 2 ripe... Read more → 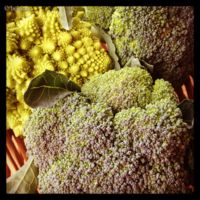 [cliccare il link per andare alla versione in italiano] fresh from the farmers' market When vegetables are this fresh and pretty, it is almost a pity to cut them up and cook them, so I try to treat them gently. In this recipe, I steam them until tender to my liking and accompany them with a nut-based dressing. just steamed I save the water at the bottom of the pot where I steam the broccoli and use it to blend miso and lightly toasted walnuts. red miso, walnuts and the dressing Print-friendly version of briciole's recipe for steamed broccoli with walnut... Read more →

ready to dry Inspiration often comes unexpectedly. When I followed the link to read this post by Aioulik of Trattoria MuVarA (in Italian), I expected to be reminded of some of the great dishes typical of the Sardinian cuisine. The photo of the lovely pasta shape resembling a miniature wreath or an earring made me search immediately online for information. Shortly afterwards, I was at the kneading board. Later, I posted this phost to my Instagram feed: from my first batch of lorighittas I think it was not bad for my first try. According to online sources, lorighittas are typical of... Read more →

[cliccare il link per andare alla versione in italiano] wheat bran My kitchen will never be featured in a fashion magazine and I am fine with that. Even on a good day, it's pretty chaotic. The top of the refrigerator is my fermentation department, where there is always something bubbling the fermentation department From the left: flaked barley for my husband's breakfast (see this post: I process barley the same way I process rye) borș kefir (which is light-sensitive so it is cloaked in a kitchen towel) I didn't know what borș was until I read this in the wikipedia entry... Read more →

[cliccare il link per andare alla versione in italiano] Madagascar vanilla beans The first time I heard the expression “plain vanilla” I had to ask for an explanation of its actual meaning. Taken literally, “plain vanilla” sounded like a combination of two contradictory terms. Vanilla is one of the most intense flavors in nature, and it is all but plain. I learned that the expression comes from the fact that vanilla is the most common flavor of ice cream in this country, a sort of default flavor. By analogy, “plain vanilla” became a synonym for basic, ordinary, “lacking special features or... Read more →

kefir cheese with dukkah and cacao nibs As I mentioned in the post on homemade kefir, for my first attempt I used kefir culture. The flavor of the kefir was a bit too acidic for our taste, and at that point, I had not yet learned all the ways in which to use kefir that I know now. I decided to see how the kefir would taste once the whey was removed, so I poured the kefir into a cloth-lined colander, then made a bundle and hung it up to drain for 24 hours (at room temperature). I then chopped up... Read more →

mango lassi made with kefir A couple of months ago, I made kefir using this culture. The process was straightforward and in about 24 hours, we could taste it. I ended up making fresh cheese with it: I will described that in an upcoming this post. While my first adventure with kefir was unfolding, Jeri, who writes the blog of the New England Cheesemaking Supply Company, published a three-part summary of information received by readers of their newsletter: 1. ordering kefir grains; 2. growing kefir grains; 3. using kefir grains. In the first post, I learned more about kefir grains (grani... Read more → 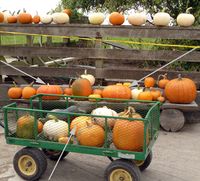 The cart in the foreground contains the result of our visit to the Warren Creek Farms pumpkin patch last October. Besides three pumpkins for carving, we chose several other specimens, like the Cinderella pumpkin indicated by the arrow. Since it is partially hidden, I have drawn two arrows to indicate two others that were on display. The original name of this variety of pumpkin is Rouge vif D'Etampes, but Cinderella pumpkin (literally, zucca di Cenerentola) fits it perfectly. The pumpkin was so pretty, I could not bring myself to cook it. I have a cold room that is perfect for storing... Read more →