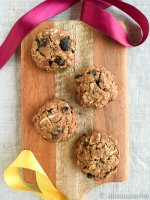 jump to Recipe just baked (placemat by La FABBRICA del LINO) Our current Cook the Books Club selection is Alice in Wonderland by Lewis Carroll. I had fun reading again Alice's adventures. For example, I paid more attention to the way she talks to herself and about herself. Truly one of those books that tell us something more or a bit different each time we read them. Soon her eye fell on a little glass box that was lying under the table: she opened it, and found in it a very small cake, on which the words “EAT ME” were beautifully... Read more → 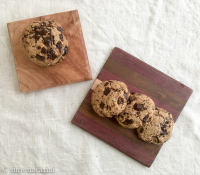 jump to Recipe the simple charm of chocolate chunks (napkin by La FABBRICA del LINO) Recently, during one of my customary browsing of the sale shelf of a local bookstore, I picked the mystery novel The Whispering City by Sara Moliner1 (pseudonym for the writing duo Rosa Ribas and Sabine Hofmann). The title and subtitle (Barcelona 1952) piqued my curiosity and the back-cover blurb made me decide to purchase the novel. The story is set during the regime of dictator Francisco Franco, who was still alive when I was born. I remember his death in 1975 (after which Juan Carlos became... Read more → 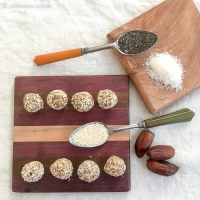 simple ingredients rolled into energy bites (bar board and coaster by BHV Woodworks, napkin by La FABBRICA del LINO) After reading Laurie King's Garment of Shadows, 12th of the Mary Russell novels, I decided to read the first: The Beekper's Apprentice, originally published in 1994. A 20th anniversary edition was issued in 2014 with a new introduction by the author and that is the volume I read. The novel is narrated in first person by Mary Russell a young woman who meets semi-retired Sherlock Holmes while roaming the English countryside—in Sussex, where he is living with Mrs. Hudson—and becomes his investigative... Read more →