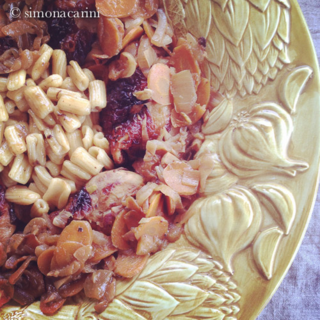 Prep Time: 30 minutes (excluding the time to make the pasta) + time to marinate the chicken

For the chicken For the pasta

How to prepare the marinade

I prepare the chicken in the evening and let it marinate overnight. You can shorten the time, but I suggest to marinate the chicken for at least four hours.

Cut the full leg into thigh and drumstick. Place the six chicken pieces in a large bowl that can accommodate them in one layer.

Cut the vegetables and add them to the bowl. Add the ingredients up to and including the peppercorns. Mix well with your hands, then arrange the chicken into one layer at the bottom of the bowl. Cover tightly and refrigerate until ready to cook.

How to cook the chicken

Place an oven rack 6 inches / 15 cm from the broiler element. Preheat the broiler.

Drain the vegetables and set aside the marinade. Add the vegetables to the Dutch oven and cook for 20 minutes, until the onions are translucent and soft.

Take the chicken pieces out of the oven and leave them on the baking sheet for a few minutes until you are ready to put them into the Dutch oven.

Dilute the Dijon mustard in the chicken stock. Add that and the marinade to the Dutch oven. Stir well, then increase the heat to medium, letting the liquid come to a low boil. Add the broiled chicken pieces and stir well. When the liquid returns to a boil, reduce the heat to medium-low, cover and cook for 20 minutes, or until the chicken is cooked.

How to cook the pasta

If you choose to accompany the chicken with pasta, while the chicken is cooking with the vegetables, bring a small pot of water to a rolling boil, add some coarse salt, stir and then toss the pasta in it. The time needed to cook them is a bit variable, depending on the size and dryness of the pasta.

When the pasta is almost ready, melt the butter in a small skillet on low heat.

Taste and stop the cooking when the pasta is ready. Pour a glass of cold water in the pot and stir. Drain the pasta leaving a little bit of the cooking water clinging to it and drop into the skillet with the butter. Stir well over medium-low heat for about half a minute.

How to put it all together

On a serving platter, form a ring with the chicken pieces and distribute the vegetables on them. Place the pasta in the middle and them pour the juice from the Dutch oven on it.