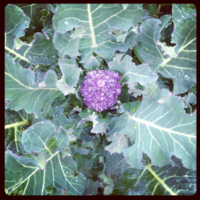 [cliccare il link per andare alla versione in italiano] a large raindrop like a diamond After the dry summer months, fall rains paint the California countryside bright green. But last fall, rain failed to fall. Browns became dull, grays became sad, and the sky remained brilliant blue — week after worrisome week. Finally, as January glided into February, it started to rain on the parched North Coast of California: A choral sigh rose from the earth. One morning in early February, under the thick black soles of my red rubber boots, the terrain of Redwood Roots Farm was happily muddy after... Read more → 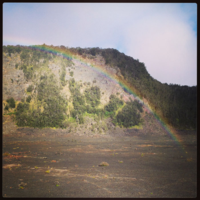 [cliccare il link per andare alla versione in italiano] Christmas rainbow On Christmas Day, the rainbow that appeared in front of our eyes as we crossed the Kilauea Iki Crater floor in Hawai'i Volcanoes National Park was all contained within the crater and within our field of view: it felt reachable, touchable. Seeing a sliver of a rainbow brings joy: seeing the entire arc was exhilarating. I thought I could walk up to the rainbow, go through it like through a gentle waterfall and come out all colored. I walked from one end to the other and I was under it,... Read more → 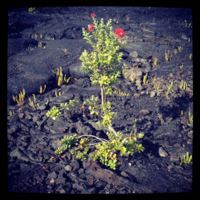 [cliccare il link per andare alla versione in italiano] 'Ōhi'a Lehua and ferns growing on lava Life sometimes makes us stop in the moment and reminds us that the only time we have is that moment. It did it to me recently, while my husband and I were vacationing in Puna, the south-east district of the Big Island. At the Maku'u Farmers' Market, along the Kea'au/Pahoa Highway bypass road, a mainlander like me had only the present to taste the phantasmagoria of fruits on display, like papayas, soft-spiked rambutans, fluorescent fuchsia dragon fruit. There was no hoarding for further than the... Read more → 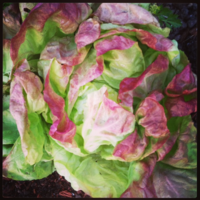 [cliccare il link per andare alla versione in italiano] love the marbled leaves I can certainly call my childhood "my salad days" — literally. A salad of Romaine lettuce was on our family's dinner menu six out of seven evenings on any given week. The Romaine lettuce (lattuga romana) was usually served by itself, dressed with fine sea salt, olive oil and vinegar, the way it is traditionally done in Italy. I neither did nor ever will object to the dressing, because it is perfect for a green salad: the problem was the dressed. The presence, in the summer, of a... Read more → 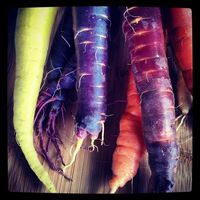 [cliccare il link per andare alla versione in italiano] look to the rainbow Brilliant blueberry or reddish purple, bright orange, pale yellow or an ivory that, the first time I saw it, made me wonder whether I was looking at a parsnip that had smuggled itself into carrot-land: When I am in the mood for technicolor carrots, I know to which stall to direct my steps at the farmers' market. One recent Saturday, in the early morning sunlight cooled by wisps of coastal California fog, I picked up by the stems a bunch of carrots with their tops still intact. I... Read more → marbled beauties Anything purple (viola) catches my attention at the farmers' market. And it does not need to be solid purple: a light brushstroke or a hint of that deep color is enough to make me head straight for the basket or box containing the irresistible produce. Each pod (baccello) of Rattlesnake bean is marbled purple in a unique way, like a sheet of marbled paper. The farmer celebrates singularity in each bean, just as the marbler does in each sheet of paper that he or she peels off from the water, rinses and then dries to reveal the pattern created.... Read more → 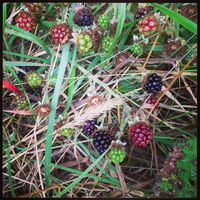 [cliccare il link per andare alla versione in italiano] hunting high and low Blackberry picking is like living. The plumpest, most ostentatiously ripe blackberry, the one I want with concentrated desire, is the one an inch away from my grasping hand stretched at the end of my stretched body precariously balanced on my tiptoes at the edge of a mass of brambles on which I don't want to fall. As a child, during my summer blackberry-picking expeditions, I was reminded of my diminutive size every time the object of desire seemed within reach to my greedy eyes, but escaped my greedy... Read more →

nasturzio in cucina / garden nasturtium in the kitchen 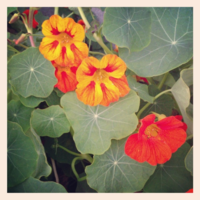 [cliccare il link per andare alla versione in italiano] Garden Nasturtium (Tropaeolum majus) Garden nasturtium's large shield-shaped leaves gather dew like solar panels gather sunlight. On a horizontal leaf, dew droplets slide towards the depression at the center. In the morning, a giant lenticular drop reflects my image on its tense convex surface — a dome that wiggles in the breeze, a drinking pool for the visiting humming bird. I wish there were something similar for sunlight, a way of collecting a small pool of it in which I could dip a finger or a brush, then paint the day on... Read more →