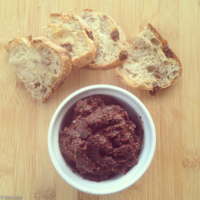 [cliccare il link per andare alla versione in italiano] a nice couple ready for the table A tall woman and a French man were preparing a chicken for roasting, while conversing amiably. She wiggled her hand into the space between the bird's skin and the flesh, something I had never seen anybody do before. I could not quite figure out to what extent the two in the kitchen were serious. My mother-in-law was watching this on her television when we arrived for a visit and we watched it with her for a while. It was my introduction to Julia Child and... Read more → 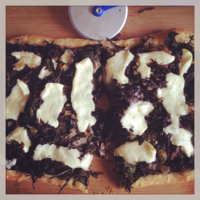 [cliccare il link per andare alla versione in italiano] ready for the plate Last week was a difficult one at briciole's headquarters due to the major disruption brought to TypePad, my blog service provider, by multiple distributed denial-of-service (DDoS) attacks. For several days, visitors could not access posts or pages and starting Monday, they would get an error message stating that the domain did not exist. It feels good to be able to write again on my blog. It was also a busy week for briciole's writer, as I attended a bread-baking class at the San Francisco Baking Institute, which was... Read more → 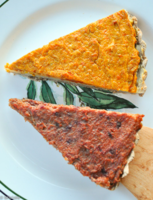 a three-[layer/texture/flavor] tart In Latvia (Lettonia), I went down the wrong path — figuratively, of course. Having baked eight types of bread out of 20 dishes from the EU countries visited so far in our virtual tour, I decided to bake a Latvian bread. I found a recipe, I made it a couple of times, was almost ready to write about it and then decided I was not enthusiastic enough about the recipe to share it on the blog. So, I started researching Latvian dishes again and finally found one that intrigued me: sklandrausis. The sklandrausis, a small... pie made of... Read more →

[cliccare il link per andare alla versione in italiano] Halloumi and Anari Fresh goat milk season in my kitchen means homemade Halloumi. I love this cheese: It is relatively easy to make and once I have it in the refrigerator, I can turn it into a lovely meal in no time. ready to be sliced What's so special about Halloumi? "Halloumi is also unique in having a high melting point and so can easily be fried or grilled... it softens significantly but it does not melt." [source] Last year, I served my homemade Halloumi with roasted cherry tomatoes, a variation on... Read more →

[cliccare il link per andare alla versione in italiano] a creamy, flavorful spread Would you like something creamy to spread on bread or crackers that is flavorful, nutritious and healthy? Look no further than my rendition of fasole bătută, a Romanian dish made with mashed beans seasoned with various aromatics (source). I read a few recipes and then went my own way, using what I had available and adjusting the quantities to my taste. This recipe suggests to fry the onions, which gave me the idea to caramelize shallots and use them as topping. I really liked my version of fasole... Read more →

[cliccare il link per andare alla versione in italiano] a view of Warren Creek Farms pumpkin patch The best part of Halloween is going to the pumpkin patch to choose pumpkins (zucche), some for carving and some for cooking. A visit to Warren Creek Farms during the month of October entails also a visit to their corn maze, which has a different design every year. The fact that I am writing this post indicates that we made it out of the maze safe and sound (thanks to my husband's orienteering skills; I am hopeless at finding my way). pumpkin patch shopping... Read more →

Three years ago, I read my first Pepe Carvalho novel, Tattoo. It inspired me to make caldeirada (traditional Portuguese fish stew), as recounted in this post. I arrived at Manuel Vázquez Montalbán (1939-2003), Carvalho's creator, through the Montalbano novels. The connection between Montalbano and Montalbán is not an accidental one: as mentioned in the post, Andrea Camilleri, Montalbano's creator, named his character after Montalbán in gratitude, and the two authors knew each other. After Tattoo, I read The Angst-Ridden Executive and Southern Seas (1979). Private detective Pepe Carvalho is an interesting character, at times difficult to fathom, which is part of... Read more → 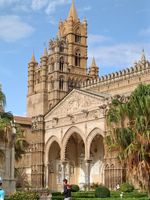 [cliccare il link per andare alla versione in italiano] The Abbecedario culinario d'Italia (Italian Culinary ABC) invites us to visit Sicilia (Sicily), and this time I have some photos to share from a visit to Palermo (capital of the region) five years ago. One characteristic of the city that fascinated me was the juxtaposition of sumptuous architecture and urban disrepair. Here are a couple of examples. PALERMO CATHEDRAL The Cattedrale dazzles the eyes with its rich decorations. SAN CATALDO The 12th-century Norman church of San Cataldo catches the eyes with its set of pretty red domes. FONTANA PRETORIA Piazza Pretoria is... Read more → 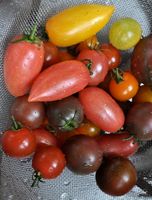 [cliccare il link per andare alla versione in italiano] take some sun-ripened cherry tomatoes Consumption of tomatoes in our household is intense this time of the year. We receive a basket of cherry tomatoes every week in our CSA box, plus some larger tomatoes, and I supplement that allowance with purchases at the farmers' market. I like the baskets of mixed varieties, which allow a taste comparison. For this tart, which I have made four times in the last three weeks, I have used mostly Blush tomatoes. and some homemade Colby Colby, which I have made twice in recent months, using... Read more →

a creamy shade of green For the current edition of Cook the Books, we are reading The United States of Arugula by David Kamp (2006). I don't think I can add much to the many reviews the book has received since its publication. It is undoubtedly an important book, very interesting and pleasant to read. Kamp's book paints a complete and complex picture that helps the reader understand how certain aspects of the food world in the US evolved to be the way they are now. My perspective in reading the book is that of an outsider-insider: I am an Italian... Read more →