The 42nd edition of Novel Food is ending with the customary roundup. I have been hosting the event for over 14 years and it's been a constant pleasure. This time we'll have a small party still rich in reading suggestions.

Each post describes a work of written words and the dish that the reading inspired. Join me on a literary/culinary tour. For each contribution, I offer a small bite to whet your appetite: follow the link to read the details of the literary work and the dish. We hope you'll be inspired in your reading and in your kitchen. 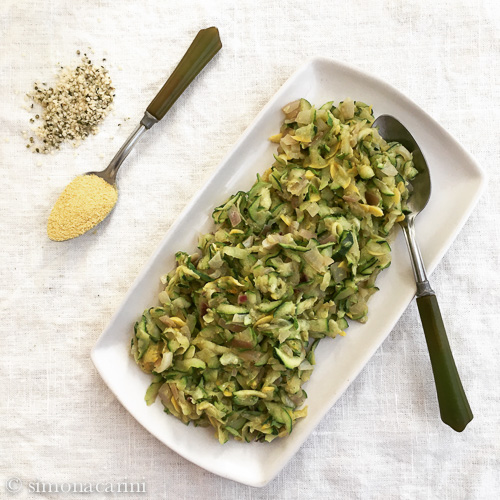 "Taylor's novels are centered around strong female characters. Her writing style is enjoyable and the stories keep the reader's attention. If you are looking for a summer read, this is a good candidate... Libby's love interest, Colton, is a widower with two young boys. Their food preferences are what one would expect... When zucchini season starts I am reminded how much we disliked that vegetable, regardless of how it was prepared... That gave me the idea of preparing a zucchini dish... This dish is light and has a delightful 'green' flavor, with a chees-y nuance provided by the nutritional yeast. It pairs well with various main courses, including frittata and legumes." 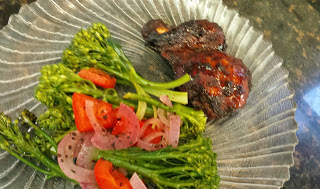 Judy of Judy's Gross Eats read Ripe Figs: Recipes and Stories from Turkey, Greece, and Cyprus
by Yasmin Khan and was inspired to prepare Pomegranate Chicken with Broccolini

"It seems like more and more cookbooks feature travel and personal stories along with recipes, and this is one such book.  In between the chapters are stories that talk about the culture, the people, and the politics of the region, and how sharing food and recipes is an act that brings everyone together, allowing differences to disappear... This meal is delicious:  chicken marinated in pomegranate molasses, sumac, cumin, Aleppo pepper, and allspice.  The broccolini is cooked with red onion, red bell pepper, dill, and Aleppo pepper.  Both dishes were so flavorful." Recipe for the chicken on this page. "I could not put the book down. And yet, because of the sheer beauty, I wanted to read and savour it as slowly as possible. I found myself backtracking to re-read sections, before going forward... Texas. Just at the very end of the American Civil War and the months following. Before instant electronic communication, when men could still be conscripted into the army, when battles would still be raging... What is most memorable about this book is the music. The desolation of war and its legacy are pervasive, of course. Perhaps that is why the music is so heartbreakingly beautiful... This recipe makes a palate-sparkling, almost buttery-flavored bread with a thin, crisp crust... I was diligent. I measured everything correctly and the bread turned out brilliantly. " 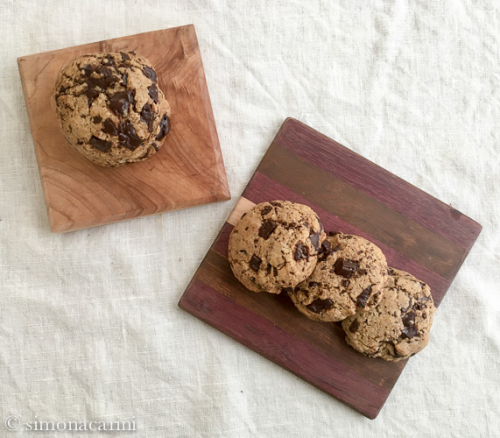 "Circumstances catapult Ana, a young journalist, into the middle of a murder investigation and she ends up becoming entangled in it, together with her older cousin Beatriz... a linguist who has fallen on hard times due to her political leanings... One of the recurring themes in the book is scarcity, partly as a result of the time (post WWII in a dictatorship) and partly as a result of Ana's limited economic means... While nibbling on half of a chocolate chunk cookie (it was pretty big), I decided to try making my own version... less sweet, softer, and have a fuller, whole-grain flavor... I have come to rely on them as energy recharge after a long run or bike ride."

You will find a link to this roundup and to those of all the earlier editions on this page. If you are looking for additional reading suggestions, head over to the Cook the Books Club website. For the June-July edition we are reading 97 Orchard: An Edible History of Five Immigrant Families in One New York Tenement by Jane Ziegelman.