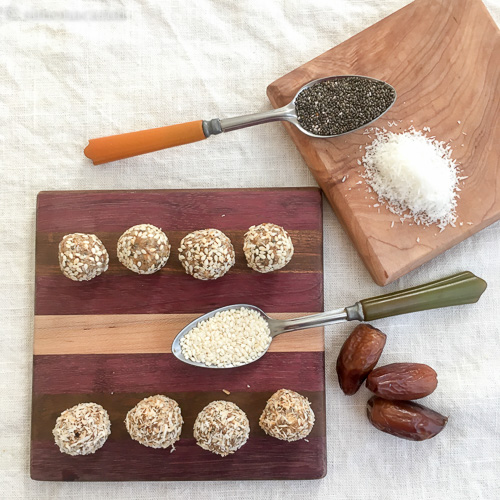 After reading Laurie King's Garment of Shadows, 12th of the Mary Russell novels, I decided to read the first: The Beekper's Apprentice, originally published in 1994. A 20th anniversary edition was issued in 2014 with a new introduction by the author and that is the volume I read. The novel is narrated in first person by Mary Russell a young woman who meets semi-retired Sherlock Holmes while roaming the English countryside—in Sussex, where he is living with Mrs. Hudson—and becomes his investigative partner (with no jealousy on the part of Dr. Watson, whom she affectionately calls Uncle John).

In the book, Russell and Holmes (they address each other using their last name) solve three cases together, then face a much bigger threat. To deal with the latter, the two leave England for a while and, offered a few different options, Russell chooses Palestine as their destination (they will return there in O Jerusalem, book 5 of the series).

Due to a guardian more intent on getting her money's worth than in taking care of her, Mary is chronically hungry (ha sempre fame), much to Mrs. Hudson's delight, given that Holmes is a disappointing eater, while Mary's appetite (appetito) inspires the housekeeper. The novel is set during WWI, part of it in Oxford, where Mary studies. In the style of the times, food is not in the forefront and one worries, particularly about Mary, during the difficult hours spent in hiding, waiting, escaping. Easily portable snacks would address the need to stay nourished.

I have the same need when going for longish rides on my bicycle, or runs. Packaged energy bites are readily available and some are quite good3, but I had wanted to make my own for a while and finally Mary inspired me to do it. Dates are an excellent source of energy (energia) in stable form and are therefore widely used as ingredients for energy bites. I am sure that during their stay in the Holy Land, Russell and Holmes ate dates, a staple in the Middle East. 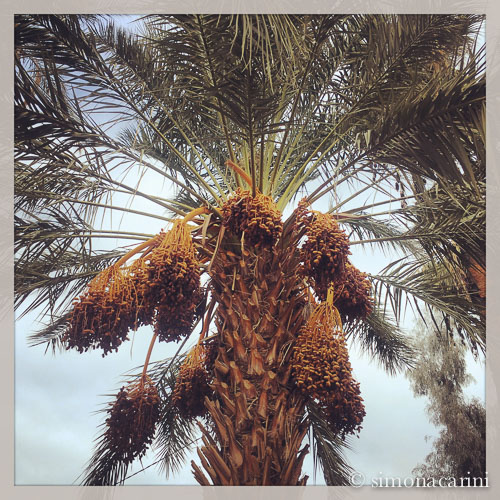 Many varieties of dates are produced in Southern California and are available at farmers market in the Bay Area. How date palms came to be grown there was the subject of a post I wrote not too long ago4 where I also talked about fresh dates (a delicacy I am looking forward to eating again this September)5 and cashews (anacardi), a favorite nut—both in the original form and as milk6 which I now make at home (rather than buying it).

Put all the ingredients up to and including the salt in a strong blender. Since the amount of ingredients is not large, a small bowl is recommended. Process for a short time, scrape the side of the bowl. Repeat until a thick paste forms. If needed (i.e., if the dates are quite dry), add a small amount of water to help the process.

Transfer the paste to the prepared container, cover and refrigerate for several hours.

In a dry skillet, toast the additional unsweetened shredded coconut until light golden, then toast the sesame seeds until fragrant. Set aside.

Cut the chilled paste into 10 g-pieces, roll each between your hands to form a ball, then roll it on the toasted coconut or the sesame seeds. The latter provide a stronger flavor. Put the bites back in the container, cover and refrigerate until ready to eat, or pack for your biking or running adventure.

You can of course make the bites larger in size.

I like the bites because they are not overly sweet and you can taste all the ingredients: dates, a hint of lemon, sesame seeds, coconut. They are tender and not sticky. 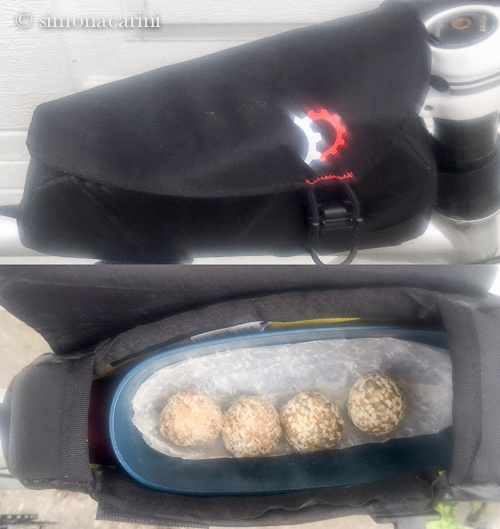 The container on my bike with my energy reserves

Basically, they are an additional reason to go on longer rides.

1 The book introduction on the author's website
2 I purchased the bar board and coaster from BHV Woodworks
3 My favorite being Sun & Swell Snack Bites (Disclaimer: I have no business relationship with the company)
4 My post on book The Food Explorer by Daniel Stone, with a recipe Fruit salad with fresh dates
5 From Flying Disc farm in Thermal, CA
6 My post on Chia pudding made with cashew only milk 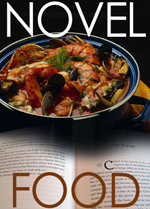 This is my contribution to the 39th edition of Novel Food, the literary/culinary event that Lisa of Champaign Taste and I started 13 years ago and that I continue to host.

These date energy bites look exactly like the sort of thing for our bike rides too! How fabulous, especially now, when so many cafes are closed or restricted to only a few patrons at a time.

Last July, I started Beekeeper's Apprentice and really liked that each chapter is pretty much standalone - each like a short story. I thoroughly enjoyed the first three chapters, and then for who knows what reason, I put the book down. Thank you for the reminder to pick it up again.

Indeed, Elizabeth, you never know whether you can find food on the way so carrying a snack besides water is important. These bites do well in warmer weather too.
I recommend you pick up the book again: there are interesting chapters ahead :)