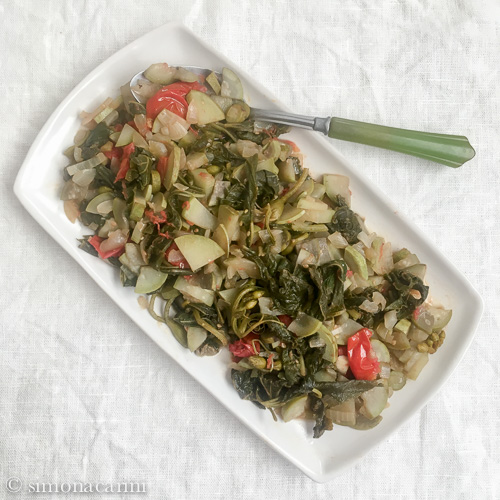 Italian author Andrea Camilleri died on 17 July, 2019, aged 931. The novels he wrote narrating the adventures of detective Salvo Montalbano are one of the main reasons Novel Food came to exist and it is therefore fitting to dedicate to il maestro (the master), as he was respectfully called in Italy, this post.

In the archive of briciole there are several posts dedicated to Montalbano and dishes from his (and Camilleri's) native Sicily2. Montalbano likes to eat well, though he is not a cook, so he relies on his housekeeper Adelina, the chefs of his favorite restaurants and a small number of friends, to delight his palate. He hates to talk while eating and prefers to eat alone. After having lunch in his favorite trattoria, to help the digestive process he walks down the pier to a special rock, where he spends quiet time considering the various elements of the case at hand and sometimes talks to a crab.

In The Terracotta Dog, the second novel of the series3, Montalbano, while dealing with a modern crime, discovers a 50-year-old one: in a cave, he finds two skeletons guarded by a terracotta dog. The mystery of the burial pulls Montalbano and he can't let go until he solves it, in quite a creative way. The story behind the two dead people allows Camilleri to describe a page of Sicilian history, around the time of the Allied invasion of the island (1943). I don't want to divulge more of the story: it is quite fascinating and you can read the book then watch the TV movie based on it4. 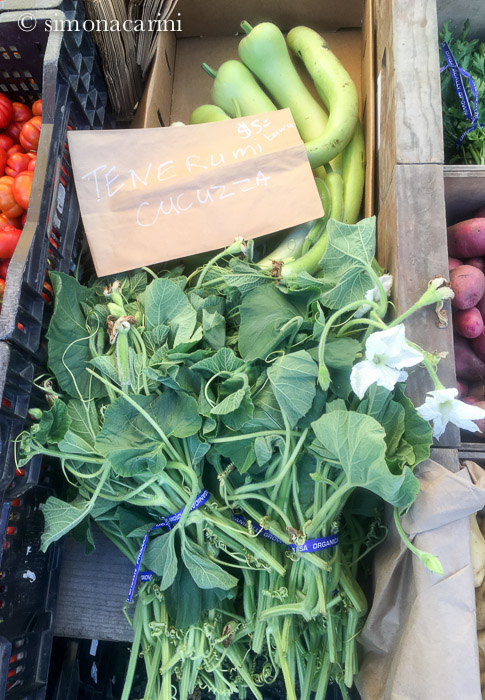 During the investigation, Montalbano is invited to dinner by headmaster Burgio, whose wife Angelina cooks a traditional Sicilian vegetable: tinnirume (also called tenerumi):

The soft vegetables, which consisted of the leaves and flowers of Sicilian zucchini — the long, smooth kind, which are white, lightly speckled with green — had come out so tender, so delicate, that Montalbano actually felt deeply moved. With each bite he could feel his stomach purifying itself, turning clean and shiny.

The vegetable reappears in The Voice of the Violin5 (the fourth novel of the series), where its original name is kept in the English translation, and where it is said to "cheer the stomach and intestines."

I tasted pasta with tenerumi when I first visited Sicily many years ago. Besides prepared as a side dish the way signora Angelina did, tenerumi are also used to make soup. When I saw tenerumi at the Berkeley farmers market a recent Saturday, I could not believe my eyes. I felt I had been tele-transported to Sicily. The zucchina lunga (Lagenaria siceraria) called cucuzza in dialect, does not belong to the same species as other zucchini6:

Lagenaria siceraria (Cucuzza longa, Bottlegourd, Calabash gourd) is an ancient cucurbit... The plant has white flowers and fruit size and shape can be very variable... There are two common types: a short necked ornamental type, var. a fiasco, and a long edible type, var. longissima. The long fruits harvested at immature green stage were a popular vegetable in antiquity (cucuzza longa), but they were replaced by various immature fruits of Cucurbita pepo from the New World where various types are known as zucchini. However, the cucuzza longa is still a common vegetable in Sicily... The shoots, called tenerumi, are very appreciated in Sicily and they are very popular in summer season in local markets. 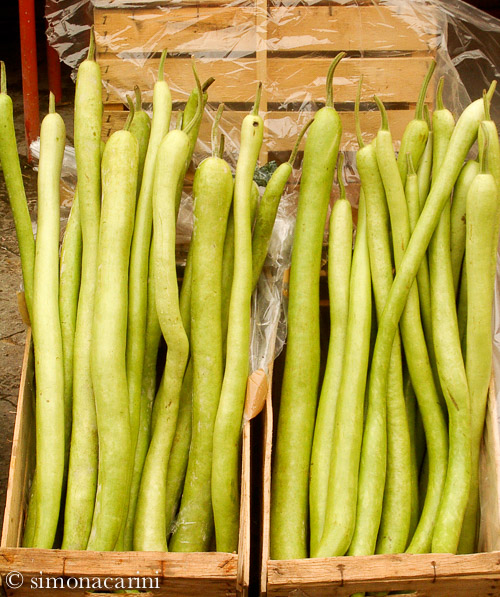 zucchina lunga sold at the Vucciria market in Palermo

The specimens of cucuzza sold at the Berkeley farmers market7 are shorter than to the ones I saw in Palermo, at the famous Vucciria market, some years ago. That was fine with me as I ride my bike to the market and it would have been awkward to pedal with a yard of cucuzza sticking out of my backpack. I bagged a bunch of tenerumi and two short cucuzze and rode home. The leaves, flowers, blossoms and tender stems are edible and are eaten, an example of efficiency in the use of available food resources. The raw leaves have a distinctive consistency: they feel like fabric. In fact in dialect they are referred to as pezzi or pezze (meaning, pieces of fabric). 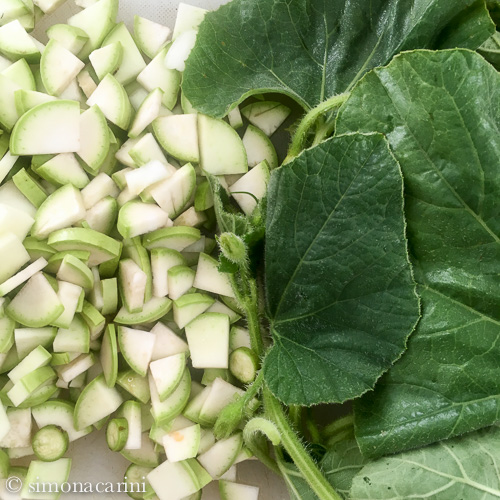 I cooked cucuzza e tenerumi simply, with sweet onion and some fresh Early Girl tomatoes from the same farmer. I can confirm the vegetable's cleansing properties extolled by Montalbano.

Wash the tenerumi, discard the thickest stems and tendrils. Cut the leaves in 1-inch / 2.5 cm ribbons and the tender stems into short lengths.

Halve the tomatoes and cut each half into 3-4 slices, depending on size.

Warm up the olive oil in a large skillet or deep sauté pan over medium heat. Add the onion, stir to coat and let cook on medium-low heat for 5 minutes, stirring often.

Add the zucchini and tenerumi and stir well. Turn up the heat to medium-low and cook for a couple of minutes, then cover the skillet and turn the heat to low. After 5 minutes, add the tomatoes and stir well. Cover and cook gently until the zucchini and tenerumi are tender, stirring every  now and then. The last 5 minutes or so, cook uncovered to let the extra water evaporate.

Remove from the heat and serve immediately.

Serves 4-5 as a side dish. (The photos do not show the whole yield.) 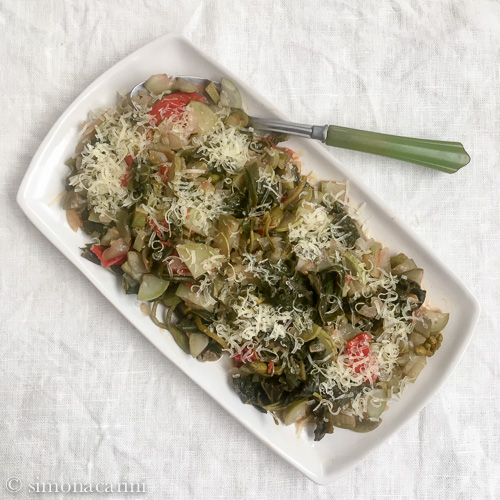 A couple of way to enrich the simple side dish: sprinkle some grated cheese on top (in Sicily I would have used caciocavallo, but at home I used some sheep milk cheese) and/or make a nest with it and cook an egg on top.

1 Andrea Camilleri's obituary in The Guardian
2 From briciole's archive, posts that mantion Montalbano: caponata di melanzane, cipollata, four kinds of bread, reginelle (sesame seed cookies)
3 The book's page on the publisher's website
4 Alberto Sironi, the director of the Montalbano TV series (some 34 movies!), died 3 weeks after Camilleri: this obituary includes also an interview (with subtitles) of Luca Zingaretti, the actor protagonist of the series.
5 The book's page on the publisher's website
6 Traditional vegetables of Sicily by Ferndiando Branca and Giuseppe La Malfa
7 Thanks to La Tercera farm in Bolinas for growing special produce 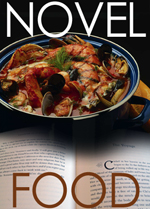 This is my contribution to the 37th edition of Novel Food, the literary/culinary event that Lisa of Champaign Taste and I started 12 years ago and that I continue to host.

Reading this post makes me want to move to California. What a great variety and quality of produce you have!

I know I am lucky to live in a state where produce abounds, Frank. The farm that grows the cucuzza has some amazing things, including several varieties of fresh beans, different types of radicchio, special tomatoes. If you look at my Instagram feed, you'll see the beans and the tomatoes, plus a gorgeous specimen of zucca Marina di Chioggia.

Our farmers markets have more in the way of Asian vegetables, along with the usual. Sad to hear of Camilleri's death, though he did live to a good age! I've loved his novels and have read all of what we have here in translation.

There are still a few novels that are being translated, Claudia, then there should be the final one, which Camilleri in an interview years ago said he had already written and placed in the safe of his publisher. In recent years he had become blind and so he dictated his novels. He worked until the end, doing what he loved. He will be missed.

Your zucchini dish looks wonderful, Simona. I had no idea that zucchini greens were ever used! Our zucchini plants in the garden packed it in in September; I'm going to have to bookmark this for next year.

Also, I'm always looking for new (to me) authors. Even if your recommendation hadn't been enough for me to put Camilleri's "The Shape of Water" on hold at the library, the AJ Finn's note "You either love Andrea Camilleri or you haven't read him yet" would have done the trick. I'm now hold No.29 for 4 copies at our library.

So much to look forward to!

So glad to read I prompted you to put on hold "The Shape of Water" at the library, Elizabeth. As the story goes, Camilleri wrote that novel thinking it would be a one-off, then his publisher convinced him to write a sequel. "The Terracotta Dog" was a big success and the rest is history.
Let me know if you try cooking young zucchini greens :)
(You may also be able to get seeds of Sicilian long zucchini for your garden.)

Ooooh!! I hadn't thought of trying to get Sicilian long zucchini seeds, Simona! I was just going to plant yellow zucchini again.

I just looked at a photo of the Sicilian zucchini plant growing on "An Italian Canadian Life" website, and now I'm positive that I've seen it growing in gardens not far from us. Now I can't wait for spring!

I did not know he had passed. Your post makes me want to pick up another one of his novels. (CTB's The Shape of Water is the only novel I've read.) Again, I am envious of your FM!!!!

By all means, let me know how it goes, Elizabeth.
(And if you are in the mood for trying another unusual squash, consider the zucchetta or tromboncino squash I featured in this post https://www.pulcetta.com/2014/10/zucchetta-pomodoro-tromboncino-squash-tomatoes.html :)

You may want to give The Terracotta Dog a try, then, Debra. I know I am lucky to live in a place where various traditions come together and farmers are sometimes adventurous in their selection of crops to grow :)

What an interesting looking zucchini! We have some variety at our farmer’s market, but nothing like this. While I love living on the Oregon coast, gardening any warm weather veggie is a little challenging. : ) I’ll need to check out the books, too - I’m always up for a new mystery author.

The farmer who grew those zucchini specializes in lesser known vegetables. Her stand at the Berkeley farmers market always has lots of people looking at the produce she brings and listening to her explaining how to prepare it. Several varieties of fresh beans, special winter squash, beautiful radicchio: she has them all. I am not a gardener and have deep admiration for people like you who grow their vegetables, particularly in a challenging place like the Oregon coast :)