Welcome to the roundup of the 31st edition of Novel Food, the literary/culinary event that Lisa of Champaign Taste and I created in 2007 — 10 years ago! Novel Food is about literary works (prose or poetry) that inspire the preparation of dishes. I continue to host this event with great pleasure, as it brings together two of my passions: literature and food.

Once again, book-loving food bloggers have contributed a set of lovely posts, each describing a literary work that the blogger read and the dish that the reading inspired. Please, follow me on a short literary/culinary tour. For each contribution, I will offer a small bite to whet your appetite for more: follow the link to read the details of the special connection between written word and food that each participant has created.

Besides hosting Novel Food on my blog, I co-host Cook the Books, a blog dedicated to reading and cooking. For the August-September edition we read Farmer Boy by Laura Ingalls Wilder and for the current edition (October-November) we are reading The Patriarch by Martin Walker (more information at the end of this post) and we have already selected the next two books. 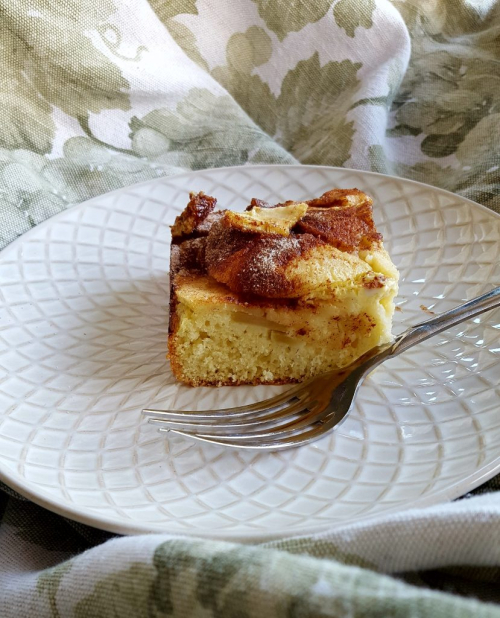 "Willner pens a compelling tale of her family’s life in East Germany, starting with the saga of her Oma and Opa. Her tale is unique. Her Opa, whom she never met, fought in both World Wars and was forced to embrace not only Nazism but also East German communism. Although he initially conformed to both, he soon saw the hypocrisy and dangers of these doctrines... It was Oma that held her beliefs and developed 'The Family Wall to ensure not only her family’s safety but also her children’s sense of identity... Since we are nearing fall, I decided to make an Apfelkuchen (Apple Cake)" 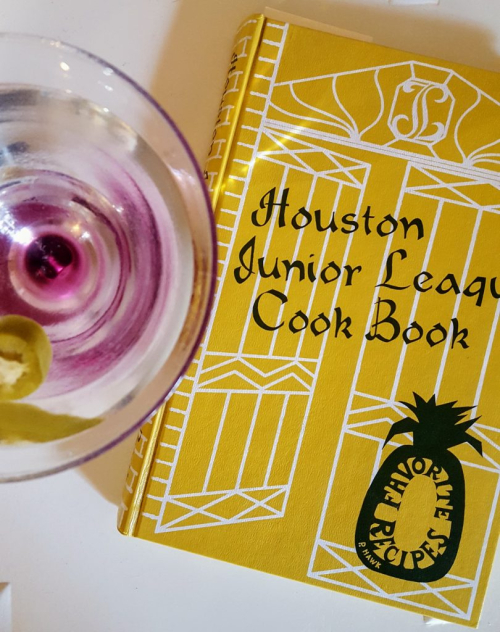 Debra read the book with the eyes of a social historian: "I have a number (over thirty) of Junior League books from around the country from many different decades. It never occurred to me what a microcosm of culture they are. As I delved into my Harvest Gold book filled with retro drawings, I traveled into another dimension of cocktail parties, buffets, and teas. To create most of the recipes... one would definitely need a can opener. From desserts to beverages, most recipes included a can or bottle or jar of a pre-made something or other. (This is not a comment on Houstonian housewives of this bygone era—Cream of Everything cans of soup were staples from the late 60s onward.)" 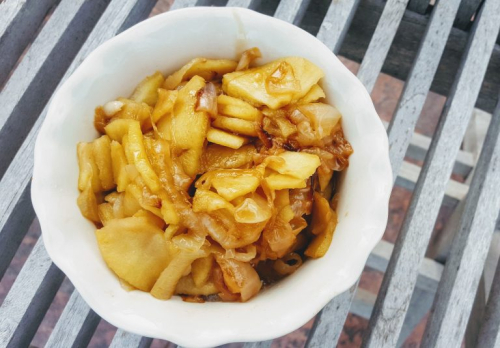 with the other Cook the Books' participants, Debra read Farmer Boy by Laura Ingalls Wilder
and was inspired to make some Fried Apples 'n Onions

"I was amazed (amazed, I tell you) as to the amount of food in the book. It seems like Almanzo’s memories and recollections (from which his wife based this novel) always revolved around food... Of course the Wilder family put up lots of preserves and pickles, dried corn and apples, and butchered their own meat. Nothing was left to waste—apple cores were used to make vinegar and the hides of the butchered animals were utilized for shoes. I decided to try my hand at one of the Farmer Boy’s favorite meals: Almanzo said that what he liked most in the world was fried apples ’n’ onions." 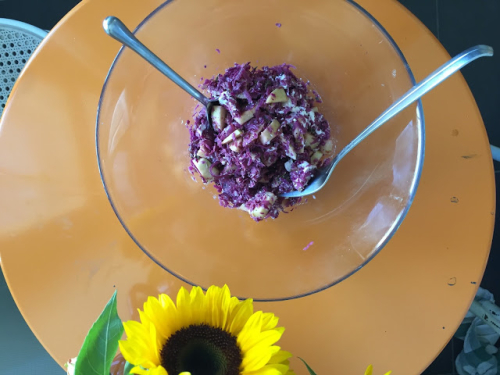 Reading The Wanderer by Alain-Fournier inspired
Lucey of My Kitchen 'Tis of Thee to make Red Cabbage with Apples, Walnuts and Goat Cheese

"The hero, Meaulnes, wanders into a gala wedding party and is entranced by the sister of the groom. Suddenly all the festivities end; the bride has changed her mind. Our hero resolves to find her... I could not find a description of the exact food for the noces (night before the wedding) feast... The novelist George Sand did describe the wedding customs for the region, including the tradition of hanging a cabbage from the highest rafter. In China, it's customary to hang a lettuce within leaping distance of the lion-dragon. I decided to pursue a cabbage recipe. Everything at today's Wednesday Market, and sweet-sour that I love! 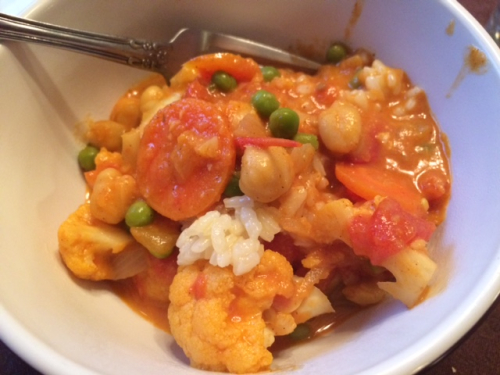 "If you want a good police procedural type mystery this is the book for you... Ken Blackstone is always a fan of curry and I like when Banks meets up with him to discuss a case. They ordered a couple of pints of lager, samosas to start, then Vindaloo for Blackstone and Lamb Korma for Banks, with Aloo Gobi, rice and plenty of naans... I was tempted by the nachos and Annie’s salad but ultimately had the craving for Indian food so……I made a Veggie Tikka Masala. Something Ken Blackstone can get into and vegetarian style for Annie." 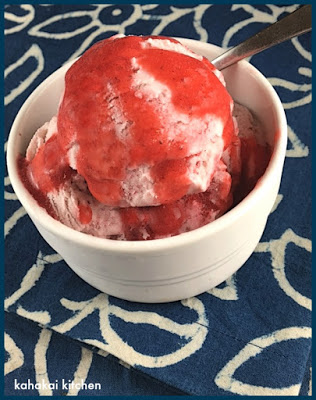 "The book is unique as it's not just a coming-of-age story, but it has a strong core of magical realism woven in. I like magical realism, unless it gets to be too much 'woo-woo'... I was very much into Hanna's fate and that of the other characters, and the book kept me absorbed in finding out what would happen... Hanna's family is quite poor so there is not a lot of great food inspiration... Since most of the food was basic and usually lacking for a large family of nineteen, I decided to go with the ice cream that Hanna and her mother Kara have at the village marketplace since it is a treat they rarely get." 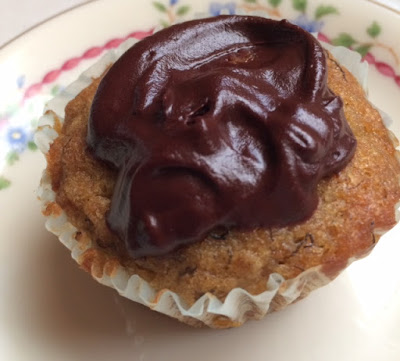 ""[I] was quite impressed with his unique combination of the history of psychology and early 20th century Vienna, romance and mystery. This is the era of Freud, Klimt and Mahler... It is the height of cafe society in elegant Vienna, with pastries galore to accompany the various fancy coffees... I settled on a delectable pastry called Cremeschnitten... Puff pastry on the bottom, a thick layer of vanilla custard, then whipped cream and topped off with a chocolate glaze... This is where the disaster comes in. Whilst taking the pan out of the fridge to add on the final chocolate layer, it fell... all over the floor and side of the refrigerator... The good news is - the chocolate was saved! Luckily, I had some banana muffins that could be topped with it. And there were chips and fresh rambutans. No one was discombobulated. Except me." 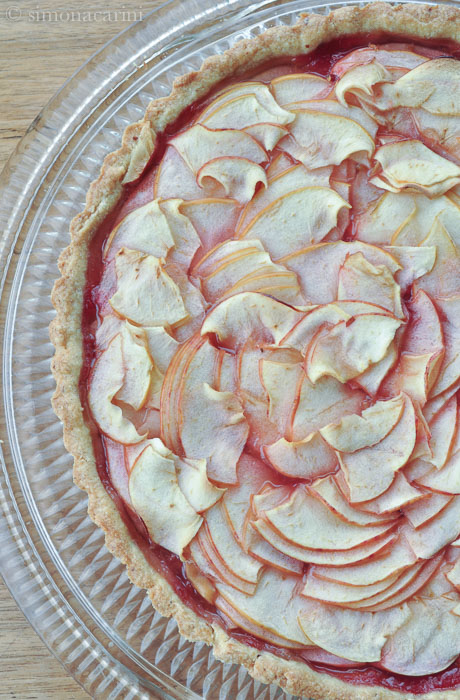 a personal take on an Italian classic

"There is a lot of food in the book and also something dear to my heart: the imperative of avoiding food waste. This topic recurs in the story including in the chapter connected to my choice of recipe. First Almanzo and his siblings harvest apples by hand, careful not to bruise them so they won't spoil when put into storage. The other apples are pressed into cider... Almanzo likes all pies... Being Italian, my preference goes to crostata, the traditional Italian tart." The book "helped me a lot recently to deal with some intense stressors and find again some balance in my daily life. I am not yet able to get into the sweet spot easily, but am working on it... The book... inspired me to bake bread again after a long hiatus. Baking bread (fare il pane) is one of the joys of life, but in the last year and a half I had it set aside for various reasons. With its focus on, among other things, bringing positive emotions into one's life, the book reminded me that baking bread is a reliable way for me to feel good. That and making cheese (fare il formaggio)."

And if you are looking for additional reading suggestions, head over to the Cook the Books website. There is plenty of time to participate in the October-November edition for which we are reading The Patriarch by Martin Walker, then sharing reviews and recipes. (Follow the link to the website: the current selection is posted on the home page.)

What fun, Simona. Thanks for hosting. Can't wait for #32!

My pleasure, as always, Debra. I am already thinking about #32 :)

They all look lovely, but I'm really drawn to the apple cake and apple tart... Must be the time of year.

Yet again a fine and inspiring set of books and recipes. I've really got to find some time to read something.

I don't blame you, Frank. It is indeed the perfect time for apples. I remember my first visit to DC, many years ago, I visited the Dupont circle farmers' market and bought a whole bunch of apples of varieties I had never tasted before. I ate nothing else for the whole time I was there.

Thank you, Phil. There is a nice variety of reading material on display here: I hope you'll find something that catches your imagination.