Welcome to the roundup of the 29th edition of Novel Food, the literary/culinary event that Lisa of Champaign Taste and I created in 2007 and that I continue to host with great pleasure, as it brings together two of my passions: literature and food. Novel Food is about literary works (prose or poetry) that inspire the preparation of dishes.

Below I present a set of lovely posts, each describing a literary work that the blogger read and the dish that the reading inspired. Please, follow me on a short literary/culinary tour. For each contribution, I will offer a small bite to whet your appetite for more: follow the link to read the details of the special connection between written word and food that each participant has created.

Besides hosting Novel Food on my blog, I co-host Cook the Books, a blog dedicated to reading and cooking. For the February-March edition we are reading Dinner with Edward by Isabel Vincent, a memoir with menus (more information at the end of this post). "Edward is old school and could give Martha Stewart tips on entertaining.
Let’s Ask Edward:  Someone brings wine to your event but the wine is totally wrong for the meal.   What is a good host to do?
Edward Says: Put the guest’s name on it, store it away, and invite him or her back when you are making something that will pair perfectly with the wine.
Since Edward is the host-with-the-most and never lets his guests linger long without a cocktail, I had to make this guest-pleasing, well-chilled drink. " 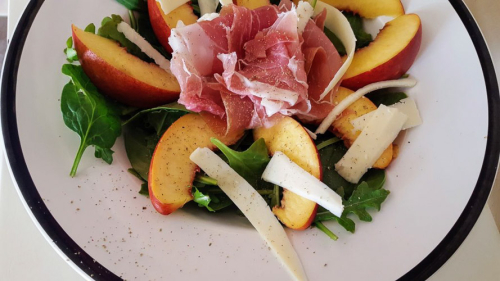 "At times, I thought the novel read more like a short story and honestly until the final pages I did not know what kind of review I would give this book.  In the final pages, Frank won me over.  Maybe it was because both Ollie and Fran finally began to have fun. A few descriptions did stand out to me though.  There’s one of Ollie’s many self-chastisements, 'Why did I buy those nectarines out of season' (21) which reminded me of an aging Prufrock’s peach questioning.  Ollie later describes the contrariness of Fran:  'Sympathy and scorn, oil and vinegar' (56). I decided to use these two lines for a salad inspiration." 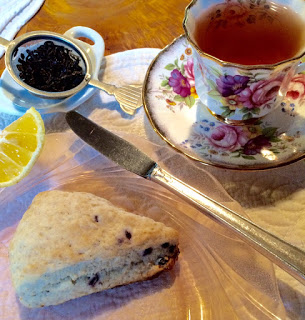 "A World War II tale, involving the women of Chilbury in Kent, who have been left to manage on their own, with most of the men away fighting.  How, with the encouragement of a new singing teacher, they re-organize their disbanded Village choir, in defiance of a notice posted at the Village Hall by their Vicar. 'As all our male voices have gone to war, the village choir is to close.'... Music provides a unifying, comforting common bond... And always, throughout, there is the traditional English comfort - A Nice Cup of Tea.  Here, mine is Lapsang Souchong, with a scone." 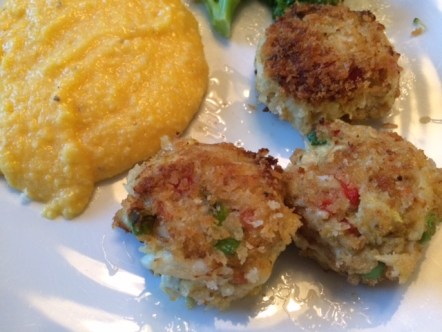 "Each chapter begins with a menu... the meal Edward would be preparing for Isabel and each meal is exceptional... One day Isabel is walking off the elevator to Edward’s apartment and she 'immediately  inhaled cinnamon, sugar and baked apples'. She felt a rush of happiness. What a lovely aroma to be greeted with and I would also be happy to know I could indulge in an apple galette later in the evening... Initially I was going to make the Apple Galette but then the lure of his crab cake dinner roped me in. My [crab cakes] are loaded with chunks of crab, fresh red bell pepper and green scallions. We also enjoyed cheese grits, steamed broccoli and and a few glasses of Chardonnay." 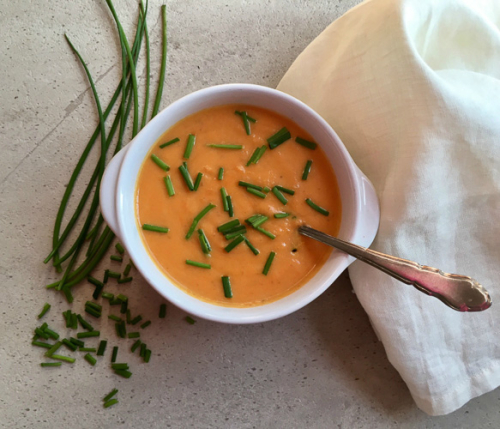 "The most enjoyable part of the book for me was perusing the weekly dinner menus, which were like eye candy, begging me to try mostly traditional dishes such as Herbed Roast Chicken in a Bag, Oysters Rockefeller, and Gran Marnier Soufflé... So in homage to Edward’s traditional dinners, I was inspired to prepare a soup not mentioned in the book, but surely part of his canon. Cream of Roasted Carrot Soup is nutritious and wonderful comfort food. Its vibrant color brightens up a winter evening, and laced with chopped chives it offers that welcome juxtaposition of creaminess and crunch." 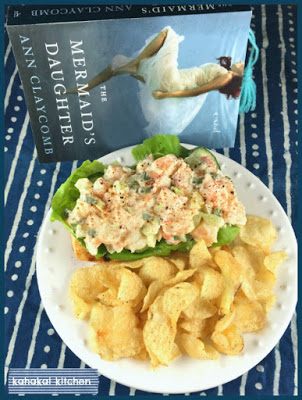 "A modern update of the fairy tale, The Little Mermaid by Hans Christian Andersen... set in the world of music and opera--giving it a different and interesting spin... beautiful, otherworldly, dark, and imaginative. It is intense, sad but still hopeful, and I have a feeling I will be thinking about it for some time to come... I decided to go with Shrimp Salad from a meal Kathleen and Harry have on their last full day in Ireland. 'The restaurant was as beautiful inside as out, all blond wood and sheer white curtains, no colors to distract from the food or the view. We ate celery root soup and shrimp salad on crusty white bread and drank a bottle of Riesling.'" 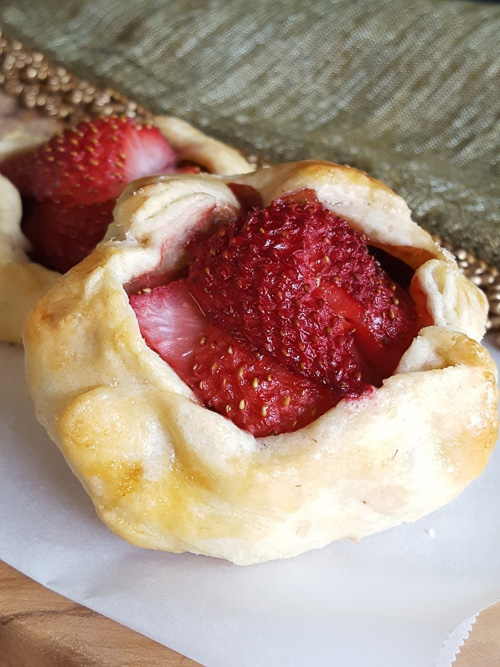 "A quick read, filled to the brim with amazing food stories, menus, and inspiration... What I eventually landed on was being inspired by the apple galette that shows up around chapter three.  Strawberries are slowly making their way into season...  I decided to aim for a version of the galette using butter instead of Edward’s recommended lard, and go for flavors that I love to share with friends.  Thus, I ended up with a dozen perfect mini strawberry chocolate galettes that my husband and I have been munching on all week long... Oh – and I’ll confess.  I did end up making a dry martini the way it was suggested in the book. " 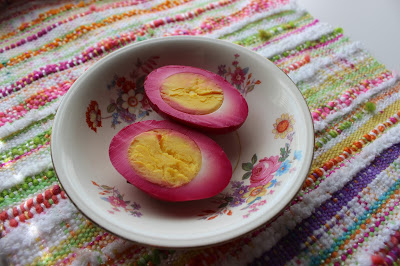 "Blushing Eggs" allowed to soak in the brine for 24 hours

"This book has inspired me a great deal, and I even had lunch and a delightful conversation with the author, Shirley Showalter.  That was FUN!  (Authors are So Cool!)... Everything about this meal shows a woman walking in Grace and making the road a little gentler for her fellow travelers. Brava!... Allow them to sit in the fridge for a few days until the color and flavor seeps through the egg white. Ok, I know that's the advice to give, but mine were in the brine only a few hours before I could NOT TAKE IT ANY LONGER. I ate the first egg. It was yummy!... pickled eggs are yummy straight from the jar, and they make a delightful addition to a cob salad!" 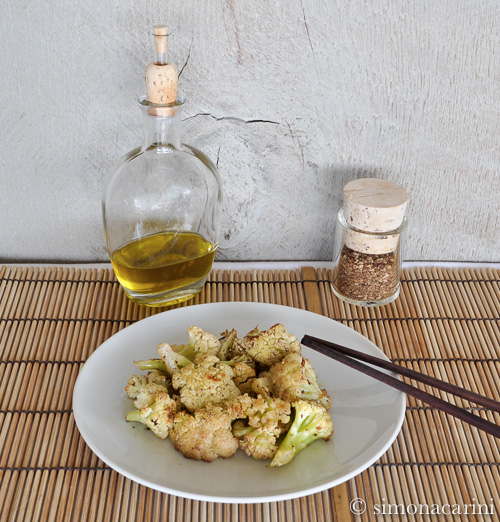 it looks plain, it tastes deep

"The story... set in a boarding house onon the Italian Riviera, opens on three women at the dinner table: they dislike and at the same time need each other to prop up their rather empty lives. Gallant describes in telling details objects, movements, expressions. The story wavers a bit in the point-of-view, but kept my attention to the end. Lily Littel, the story's protagonist, with her double life — the dull one led on the Italian side of the border, the wild one led on the French side, in Nice — gave me the idea of spicing up a cauliflower I had bought at the farmers' market." 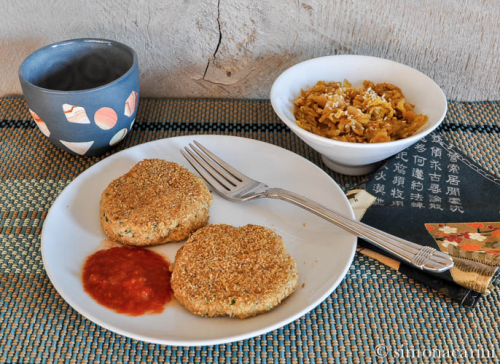 served with tomato sauce and a side of napa cabbage

"I immediately took to the story, in part because Edward reminded me of my beloved Uncle Domenico. Though he was not a cook in Edward's way, our friendship developed over shared food and meals. I miss him a lot... When my mother installed the meat grinder on the table, I knew something good was in the making. She did so rarely and even more rarely did she let me turn the handle. A meat grinder has remained in my mind a fascinating kitchen tool. So when I saw one on the side of the road, among other objects, in a box labeled 'FREE' I grabbed it, cleaned it, made sure it worked and stored it in my kitchen."

And if you are looking for additional reading suggestions, head over to the Cook the Books website. The February-March edition is wrapping up this week, but will be followed by the April-May edition for which we will read Life from Scratch by Sasha Martin then share musings and recipes.

The next edition of Novel Food will be in late spring: stay tuned for the announcement. In the meantime, read good books (maybe with the next Novel Food in mind), cook good dishes, enjoy good food and otherwise savor life's local and seasonal offerings.

As ever a fine selection of dishes from a fine range of works. I'm still kicking myself for not being able to find the time to enter. Of course, any set of entries with a scone and a cup of tea would be suitable for a stereotypical Englishman like me.

Don't worry, Phil, the next edition of Novel Food will be announced before you know it ;) I love scones too!