Welcome to the roundup of the 28th edition of Novel Food, the literary/culinary event that Lisa of Champaign Taste and I created in 2007 and that I continue to host with great pleasure, as it brings together two of my passions: literature and food. Novel Food is about literary works (prose or poetry) that inspire the preparation of dishes.

Like all its predecessors, the current edition includes a set of lovely posts, each describing a literary work that the blogger read and the dish that the reading inspired. Please, follow me on a short literary/culinary tour. For each contribution, I will offer a small bite to whet your appetite for more: follow the link to read the details of the special connection between written word and food that each participant has created.

Carmen Shenk read hot-off-the-press Cooking for Ghosts by Patricia V. Davis
and was inspired her to prepare two dishes: 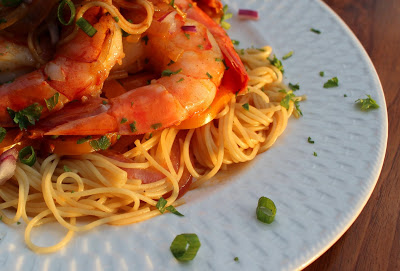 "Chef Christiano creates this shrimp dish in honor of the beautiful and exotic Rohini, an herbalist from India... I really wanted to create my own real-life version of this fictional (maybe even magical) dish. The characters in the book don't give us many clues to their secret spices, but nutmeg is mentioned a number of times among Rohini's stash of herbs and spices.  Nutmeg has long been one of my favorite spices, especially in savory foods... Another of my favorite secret spices is smoked paprika.  Sorry, regular paprika just won't do... Cardamom is one of India's secret spices, it's rich, complex, and exotic. " 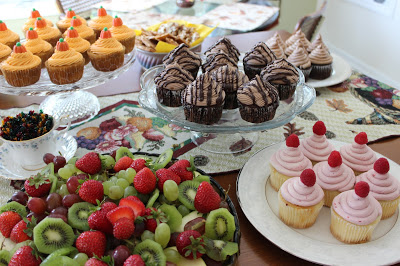 "I've had a weakness for cupcakes (aka cuppy cakes) for years, and that hasn't changed.  So when I'm reading along and Angela mentions 'Jack-O'-Lantern Spice' cupcakes, and the 'Hazelnut Ganache-filled' cupcakes, along with a lot of other yummy pastries and treats... well, I knew I will be craving those flavors until I get in the kitchen, make a little mess, and put the last icing swirl on a batch of cupcakes.  Ms. Davis also mentions a Devil's Chocolate Decadence which I also imagined as a cupcake, and she mentions the Raspberry Chocolate Truffle Tart... which inspired me to add a fresh berry cupcake to this little collection as well. " 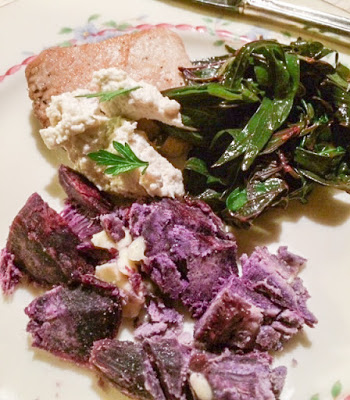 Claudia of Honey from Rock read The Tomb of Zeus, by Barbara Cleverly
which prompted her to prepare some Skordalia and Horta

"I was not tempted to reproduce that particular dish, but the horta and skordalia piqued my interest. Skordalia is a sauce (or dip) often served with fried, battered fish.  I wanted to try that. When I visited Crete several years ago, it was during the off-season, and many restaurants were closed. Nevertheless,  I do remember enjoying all of my meals. Complementary raki everywhere may have helped. No one served me lamb's brains... Turns out horta is actually a dish I make all the time. Cooked greens, steamed or boiled, dressed with olive oil and vinegar or lemon. I used sweet potato greens and a perennial spinach from my garden." 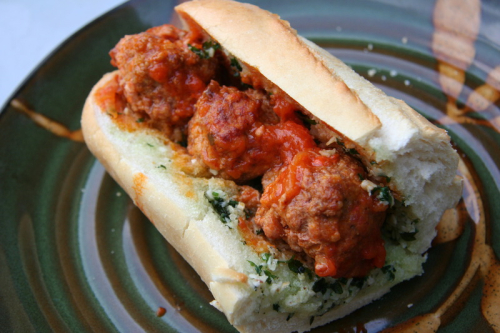 "The book... is another dystopian teen novel, but this one has some elements that could be happening now (and, as you keep reading, you realize seeds are planted in the early 2010s... creepy!) and may give readers pause to focus so much on technology... Lux is the thinking app and basically runs your life for you—she (or he, depending on how you set it up) lets you know how long it will take to get somewhere, the best way to spend your weekend and even what coffee order to place. Rory is in a coffee shop, ready to order her usual vanilla latte, when the barista insists she try something else. This turns into a strange friendship, but one that helps Rory break out of Lux's grasp. " 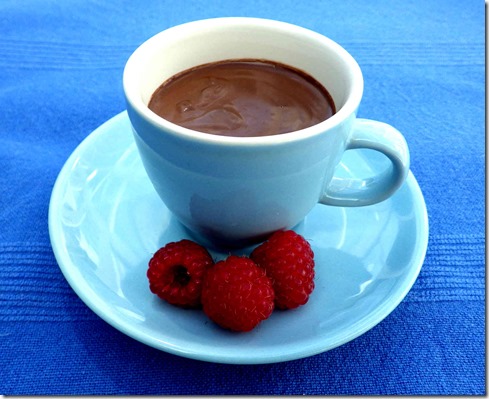 "So wearing suitable clothing and with a lot of strong coffee to hand I read all seven volumes. It took a while, but I survived... there are two observations that I'd like to pass on. First, at some point during volume two I actually started to think that prodigiously long sentences were perfectly normal and had to give myself a serious talking to in short phrases. Second, there are more jokes in Proust than I was expecting... Crème au chocolat [is] a little treat that clearly meant a lot to Proust and his family... Little chocolate crèmes are more often than not made by creating an enriched custard and adding chocolate before cooking in a bain-marie. As usual, though, I'm trying to make life as simple as possible and this recipe for crème au chocolat is ridiculously simple." 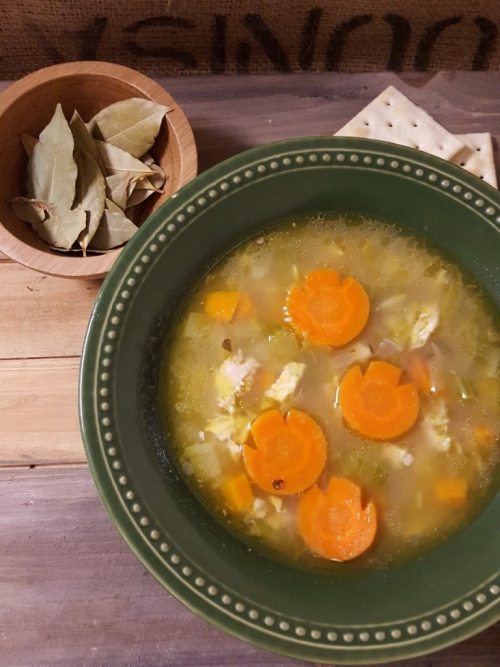 "One of the things that has struck me is how much food plays into each story [of the 50-book series]. In one of my favorite parts of Calculated in Death (book 45 in the series), Peabody and Dallas stop for soup in between interviews of murder suspects and Dallas calls the soup "magic" – it’s just how good it is.  I don’t recall that she actually ever reveals what’s in the soup, but magic soup becomes a touchstone throughout the book... Since soup is one of my favorite foods, I’ve been thinking a lot lately about what my “magic” soup is and decided it would be chicken noodle soup of some sort." 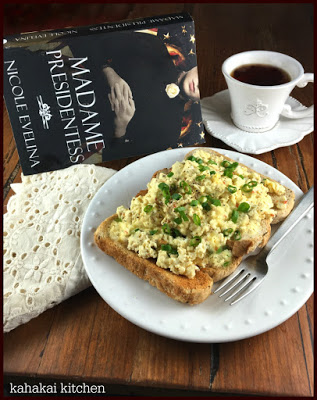 "A fascinating and timely read about the first woman to run for President of the United States, Victoria Woodhull... a leader of the American Woman's Suffrage Movement [who ran] while fighting to give women the right to vote... There were a few mentions of toast—coffee and toast, buttered toast and tea, nibbling on a crust of toast. Since toast didn't seem like enough of a book-inspired dish, I decided to top it with something more fun—Presidential creamy scrambled eggs. Why are they Presidential? Well according to several different sources, these eggs were the favorite of President Franklin Delano Roosevelt and were made by Eleanor at the table at family dinners." 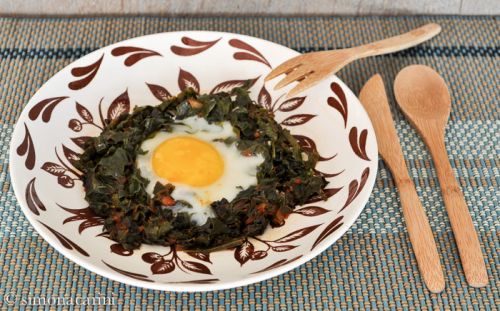 Reading The Secret Book of Frida Kahlo by F. G. Haghenbeck made Simona of briciole
think about painting with ingredients in her Eggs nested in leafy green vegetables

"I thought about how in the kitchen I use ingredients a bit like a painter chooses his/her colors. I usually follow a recipe, but sometimes I just use what I have and see (taste, actually) if it works. This is particularly true with recipes that use leafy green vegetables... One evening that I had some of my tomato sauce made with roasted tomatoes, I tried pairing them and liked the result. Then I thought I could arrange the greens into a nest a cook an egg inside. The result is currently my favorite way of eating the greens." 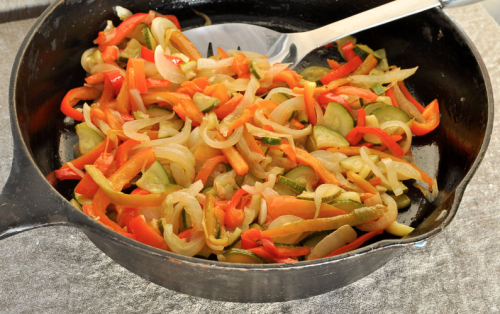 Simona of briciole also read Norwegian By Night by Derek. B. Miller
and was inspired to prepare Sweet peppers with onion and zucchini

"When the boat runs out of fuel, Sheldon docks and breaks into a nearby summer house, where he makes dinner for the boy and himself with whatever he finds in the cupboards. Sheldon's actions are familiar to me. Sometimes I plan ahead. Other times, I open the refrigerator and put together a meal with what I have. The side dish I am describing here is the result of a set of casual events. I had some sweet Italian peppers and some zucchini from the farmers' market, plus some cipollini onion from my CSA box."

And if you are looking for additional reading suggestions, head over to the Cook the Books website, where the October-November edition is underway: we are reading Tomorrow There Will be Apricots by Jessica Soffer. We have also just announced the next four selections.

I meant to join, but time got away from me. Maybe next time I'll have the time.

No worry, Vicki. I plan to announce the next edition the second half of February.