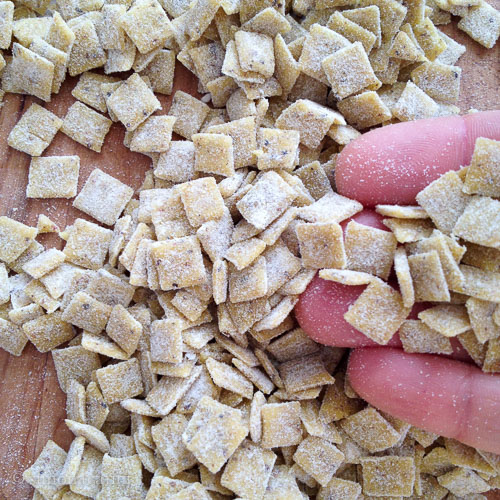 For me, the current selection of our Cook the Books Club, The Hundred-Foot Journey by Richard Morais, was a movie before it was a novel. Ten minutes into it, I started fidgeting. Five minutes later, my husband and I agreed it was not worth watching further. Nothing happened in that quarter of an hour to make us wonder what would happen next.

With that history, I approached the book with caution and was pleasantly surprised. It is much better than the movie, at least until the midpoint: the story, the characters (particularly the protagonist's mother) and the descriptions are interesting and enjoyable. At the scene in the chapel my suspension of disbelief shattered, then the novel became another story of apprenticeship in the kitchen.

The book has a lot of dishes in it, but what intrigued me was the location of the French village where the protagonist's family moves, the Jura, so I did some research on French mountain cuisine and read about crozets, a type of pasta typical of Savoie (which is south of Jura) traditionally made "from wheat flour, buckwheat or a mixture of both."1 As you can see from the photo, the dough was quite pretty, of a pastel yellow and speckled, thanks to stone-ground buckwheat flour. Traditionally this pasta is used to make gratins and I was planning to do something along those lines, but an unwelcome cold requiring chicken soup therapy for my husband sent the crozets into hot chicken broth. My version of crozets combined the richness of egg with the rustic texture of stone-ground buckwheat flour. They were a great company to the pieces of chicken that enriched the soup.

Ingredients for the pasta dough:

Make crozets
On the working surface or in a bowl, create a well with the flours and salt and crack the egg directly into it. Scramble the egg with a fork. Draw flour from the sides of the well into the center, mixing well with the egg.

Trade the fork for your fingertips. Draw flour until a soft dough forms. If you started in a bowl, empty it on the working surface and scrape its side and bottom well.

Starts kneading the dough: push the dough away from you with their heel of your hand (given the small size of the dough, one hand will be enough), then with the help of the other hand gather it back toward you folding it on itself and turning it 90 degrees. Add a bit more flour (5 grams or so) to obtain a soft, non-sticky dough. Continue kneading in the same way.

Knead the dough until it is smooth, 8-10 minutes. Let the dough rest for an hour or so (at least half an hour), well covered (e.g., in a small ziplock bag or wrapped in plastic film) so it doesn't dry out.

Cut the dough into 2 equal pieces, flatten both with a rolling pin and then roll by hand or with a pasta machine. This is a fairly thick pasta, so I stop at the last but two notch of my pasta machine. Sprinkle the dough with all-purpose flour as needed to prevent sticking.

Sprinkle the dough with a bit of all-purpose flour, then cut each piece into 1/4-inch / 6 mm wide strips (basically, tagliatelle) with the machine attachment or by hand. In the latter case, fold a 3-inch strip of pasta lengthwise away from you. Continue folding the strip until the entire pasta sheet is folded into a flattened roll. With a sharp knife, cut across the flattened roll. Immediately unfold the cut strips, then line them up and cut them across into 1/4-inch / 6 mm wide squares. (I do this with my bench scraper rather than a knife.) 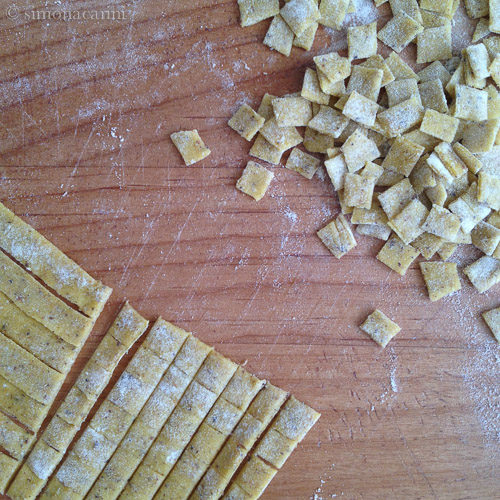 Sprinkle the crozets with flour and run your fingers through them (see top photo) to ensure that they are well separated and don't stick together.

Continue until you cut all the dough, kneading and rolling again cutouts as needed.

Make the soup
Bring the broth to a boil in a saucepan and add the crozets. Cook until tender (the time needed depends on how dry they are). In the meantime, if the chicken is cold, warm it up in the microwave. Once the pasta is cooked, add the chicken to the soup and stir. Take the saucepan off the heat.

Ladle the soup into bowls and optionally sprinkle a bit of Parmigiano-Reggiano on it. Serve immediately. 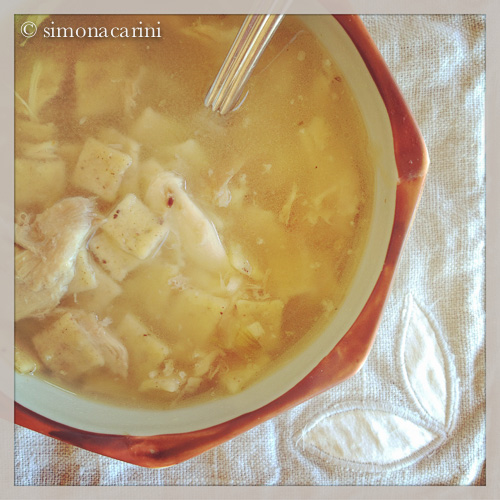 Thanks to the book, I went on a journey of discovery and am pleased to have found crozets. (I suspect you will read more about this pasta soon.)

That does sound delicious. I like pizzoccherie but sometimes pasta in brodo is what the heart needs!

You always make the most fun and unique pasta Simona--each one more delicious-looking than the last. I am glad you were able to find inspiration in the French mountainside for your crozets and I can't wait to see and hear more about them.

Since I am stuffed up myself, I want to dive through the screen and enjoy the resulting soup--I am sure it worked wonders. ;-)

Thanks for joining in this round!

You are always such an inspiration for pasta making, and I want to try this one soon. The soup sounds heavenly, a perfect match.

Thank you Deb. I wish I can send you a bowl through the screen. Thank you so much for hosting!

Thank you, Claudia. Pasta continues to be a source of inspiration for me and finding new traditions is quite exciting.

The pasta looks lovely! How perfect! I didn't care for the book or movie either!

The book turned bad half way for sure! I researched French mountain recipes too but missed any mention of this pasta but I love it, got to try. Great recipe and soup!

Thank you, Evelyne. I will continue to look for recipes from this area: so interesting!

I enjoyed the book when I ready it many years ago, but when I watched the film, I enjoyed it MUCH more. I love that you made pasta. So creative, especially for this round.

I love how I always learn something new when I visit your blog, Simona! I love pizzocheri but had never tried–or even heard of—these crozets. They look well worth a try, however. Something like a cross between pizzocheri and quadretti, perhaps?

Thank you, Debra. I love exploring pasta shapes and this was new to me.

Grazie, Frank. This was a discovery I am glad I made. Yes, a cross between pizzoccheri and the quadrucci my mother and aunt made with cutouts after making tagliatelle. They are fun to make.

I would just love some of that pasta in chicken broth. So pretty and I can almost taste the wonderful egg noodle in the broth.

The dough is very pretty-looking, indeed. So, how did it taste? I bet, very good with the soup. I'm trust that hubby is feeling much better now especially after the chicken soup and special crozets.

Hi Simona - when I often visited my company's office in Geneva Switz. The folks there took me up into the Jura for dinners. I don't think I ever had this pasta though and it looks lovely as do all your pasta dishes.

Thank you, Paz. The richness of egg went well with the rustic texture of stone-ground buckwheat flour. My crozets definitely tasted different from regular egg pasta. They were a great company to the pieces of chicken that enriched the soup.

Gosh, I should have consulted with you Cathy. Crozets are originally from Savoie and probably have not yet been adopted by their neighbors on the north (Jura). I hope I'll visit the area on day: I am quite fond of the Alps and Alpine region (plus they have some awesome cheeses).