Welcome to the roundup of the 24th edition of Novel Food, the literary/culinary event that Lisa of Champaign Taste and I created in 2007 and that I continue to host with great pleasure, as it brings together two of my passions: literature and food. Novel Food is about literary works (prose or poetry) that provided inspiration in the kitchen.

Please, follow me on a short literary/culinary tour. For each contribution, I offer a small bite to whet your appetite for more: follow the link to read the details of the special connection between written word and food that each participant has created. 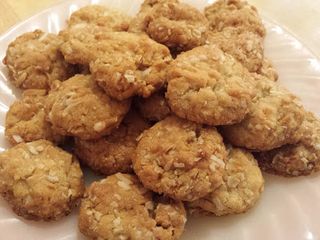 Lucia of So, what are you making for dinner? was inspired by her book club's choice The Narrow Road to the Deep North by Richard Flanagan to bake Anzac Biscuits

The book tells "an incredible story. It was about Australians in a Japanese POW camp on the Thai-Burma death railway. It was brutal and moving. There were times I had to shut the book and walk away. But it kept me wanting to read more...  I wanted to make an Australian cookie so I went to Google and found the recipe for Anzac Biscuits." They "were really, really good. So good that they may be part of this year's Christmas tray." 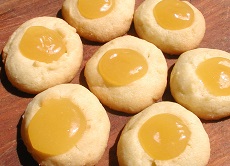 After hearing the author speak at an event, "I set out to explore some of his lesser advertised novels.  In this particular case, that would be Corduroy Mansions, a description of the lives of an eccentric group of Londoners and one precocious dog... Two of the novel characters, Caroline and James, spend an afternoon making cookies.  Not just any cookie, though, but Lemon Gems from Nigella Lawson's cookbook, How to Be a Domestic Goddess, which just happens to be on my bookshelf." 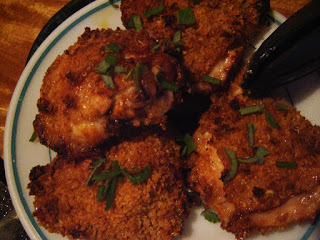 "I enjoyed Albert's recent approach to character voice, shifting between the various leads, which brings more depth and insight to the story.  She also includes her usual interesting segues into different local and cultivated herbs, as Cat's Claw, which give each book its title.
Also included at the back of these novels are several recipes mentioned in the course of events. None of which, in this case, called my name for dinner.  However, the thought of oven-fried, spicy Texas style chicken did. Big Time. Love that smokey chipotle flavor." 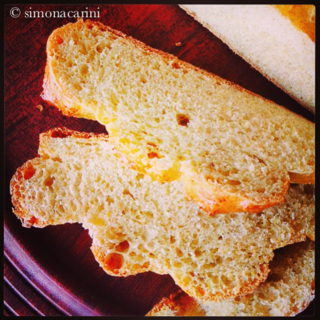 golden bread in the golden hour

Simona of briciole (your host) read The Wedding Bees by Sarah-Kate Lynch
and baked her version of golden Cuchaule: Swiss saffron bread

"The cast of characters is quite colorful and the protagonist, aptly named Sugar, tries her best to bring the smile back to their faces. Among them, Ruby, a young woman robbed of her smile by anorexia. The few 1/8 of a rice cracker portions she doles out to herself daily made me want to bake bread for her, the quintessential nourishing food of the culinary tradition in which I grew up, and sweeten it lightly with honey." 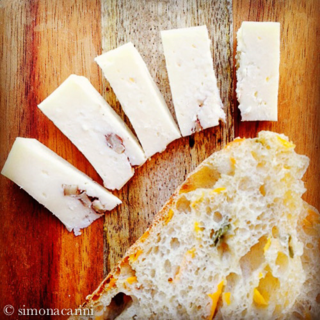 "Eilish's worries about surviving end once she moves into the house in Craven Street, where, among other things, she eats buttered bread for breakfast and tea. Erin finds "natural-yeast bread" in her brother's kitchen, a sign that the new treatment he is undergoing with Dr. Berrick includes a healthier diet. So, I decided to create a bread for the two E's of the book..."

Anzac cookies were created during WW II to sent to the troops. Anzac meaning Australia New Zealand Army Corps. It sounds like they fit perfectly with the story.

I always enjoy reading the lineup of the Novel Food. All the books sound interesting that the dishes prepared, tasty. Thanks for always putting this together!

Thank you Cindy for your comment. I agree with you: they were a perfect choice for the story.

Glad to read you enjoyed the roundup, Paz.

Hi Simona, This is a great place to get ideas for books to read, and for food!! I love your contribution, too! I may have to send you an idea for your next edition, as I have been reading an awful lot lately.
Molly

Thank you, Molly. Please, do send me your idea. I am interested to know what's you've been reading.

Oh, my gosh! I'm the author of THE GLASS HARMONICA, and I'm startled and delighted that my novel inspired a recipe--which I will now try, immediately. Thank you very much.

Dear Louise,
Thank you so much for your comment. I am honored.
I thoroughly enjoyed your novel. I could not put it down :)

I plan to be back for the next round! I have a book and recipe all picked out--now to find time to make and photograph it... Thanks for keeping this event going!

Hurrah! Thanks, Ruhama. Your absence was totally justified :) I will announce the fall edition in a few days. Stay tuned!