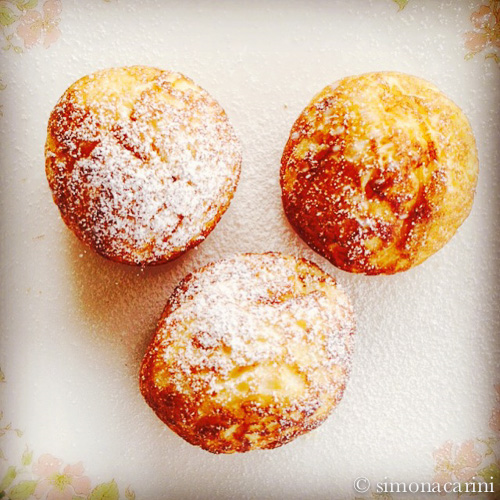 aebleskiver, why haven't I met you before?

The thirteenth stop of our World Culinary ABC1 , which I am hosting, is the United States (Stati Uniti), my adoptive country. The city chosen to represent the US is Minneapolis, the largest city of the state of Minnesota.2 Together with the state capital, Saint Paul, Minneapolis forms the metropolitan area called the Twin Cities. 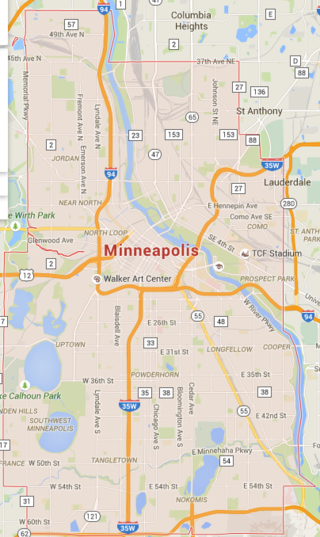 I have been to Minneapolis a few times, as my husband has friends there (all my visits occurred in the summer: winter in the Twin Cities is quite intense3). Skyscrapers (grattacieli) are not an attraction for me, nor are stadiums or stores. What makes Minneapolis special in my eyes are its bike trails.4

Boasting nearly 200 miles of recreational paths winding through the metro area, you'll see how we prize the outdoors. In fact, Minneapolis has one of the only fully urban scenic byways in the country.

"Nearly 200 miles" (approx. 320 km): did you get that? Basically, a bicyclist's heaven (paradiso per ciclisti). Every time we have visited the city, my husband and I have rented bikes and taken advantage of the paved, well-marked and well-kept trails, riding around the pretty lakes that dot the city, along the Mississippi River, and on the Midtown Greenway. The latter is a 5.5-mile long former railroad corridor with bicycling and walking trails located in south Minneapolis. "For most of its distance across the city, the corridor is grade-separated from the street grid, either in a gorge passing under bridges carrying streets overhead, or on a levy with traffic passing underneath it.  This offers barrier-free bicycling that can make cross-town trips faster than going by car"5 — and definitely more pleasant.

The scenery along the trails varies: from verdant lake shores to riverside (sometimes re-purposed) industrial buildings to backyards and community gardens. The pleasure of riding a bike in Minneapolis comes also from the orderly traffic on the trails and the attention car drivers gives to bicyclists when they share a street.

The lakes (laghi) are also an attraction. "With over 22 lakes in the metropolitan area alone, there is a rich lake culture that will make you get outdoors, stay healthy and be continuously struck by the beauty of nature. The main attraction is the Chain of Lakes: Four of the largest lakes in Minneapolis."6

Finally, a special mention goes to the Minnesota Center for the Book Arts, a vibrant art center housed in a beautiful complex.7 Minneapolis is famous for its theater scene and is reportedly getting on the map as a food destination.8

To decide which dish to make to start the three weeks the World Culinary ABC dedicates to the US, I looked for a traditional berry and/or rhubarb recipe. On a page listing Minnesota recipes,9 the word Aebleskiver caught my attention. I don't know how it happened that in my 20 years living in the US I have never met aebleskiver, but a photo made me decide to remedy.

That a traditional Danish dish found a home in Minnesota is not surprising, given the history of immigration from Scandinavia to the Midwest.11 On the Æbleskiver wikipedia page, you can see the photo of a man making æbleskiver at Danebo, the Danish-American Cultural Center in Minneapolis. In Tyler, MN, at the end of July they celebrate Aebleskiver Days12 and in Askov, MN, "rutabaga sausage is served along with traditional Danish Aebleskiver" during the Askov Rutabaga Festival & Fair, held in late August, an event that dates back to 1913.13 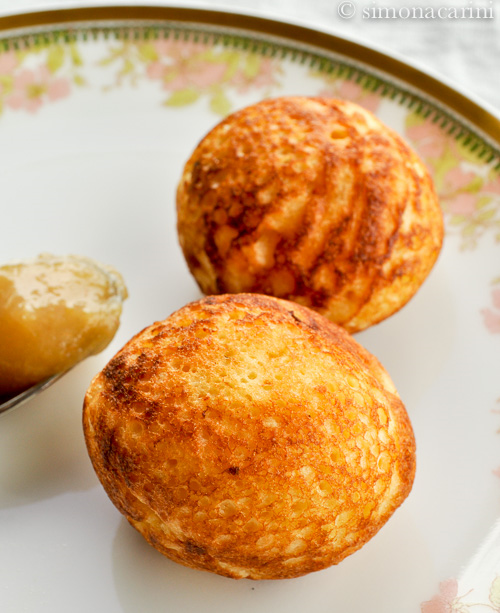 To make aebleskiver, I purchased the special pan, then started my experiments. The first time was a bit tense, as the instructions I had read for turning them were not easy to apply. But then I watched the video Making Aebleskiver with Arne and from then on, making them was fun. The recipe below is the result of some reading and some testing of a few variations. Not having tasted aebleskiver before, I can't say how my version compares to what you would eat in Minnesota, but I can say that aebleskiver have become a breakfast favorite in our household.

Special equipment: an aebleskiver pan (with slots 2.25 inches / 5.7 cm in diameter) that works well with the type of stovetop you have and a couple of bamboo skewers.

Break the egg and pour the white into a small bowl. Let stand to bring to room temperature. Add the yolk to the buttermilk or kefir and whisk in. Do the same with vanilla extract.

Place all the dry ingredients in a bowl and whisk to aerate and blend.

Place aebleskiver pan on the stove and heat up on medium heat. Oil the slots. I use sunflower oil for this, rather than butter, and a pastry brush to ensure the slots are well oiled (the bristles burn a bit, so I will need to replace the brush at some point).

Pour the liquid into to the bowl with the dry ingredients and add also the butter. Stir until just combined. Add 1/3 of the egg white and fold in delicately, then repeat with the rest of the egg white. The batter will not be homogeneous: that's ok.

Make sure the pan is well heated and each slot well oiled. Pour about 2 tablespoons (30 ml) of batter in each slot. The batter should reach just below the rim: if it overflows, turning the aebleskive will be more difficult. 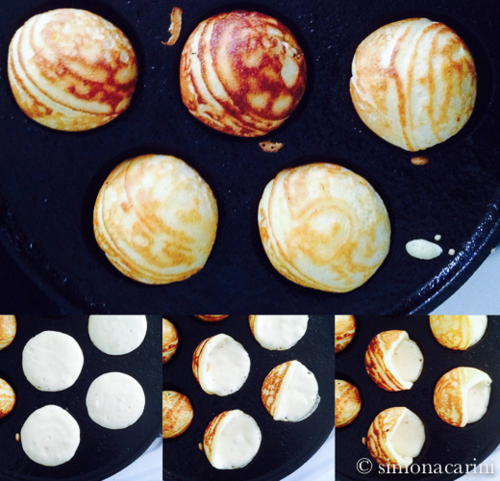 the phases of cooking aebleskiver

The batter will puff up (see left photo of the bottom row below): the fun has begun. When a thin crust has formed on the bottom of each aebleskive, insert the skewer down into the batter close to the rim until it hits the side of the mold, then slide the aebleskive up about 1/3 of the way, as in the video. If the slot was well oiled, the aebleskive will easily slide. [If not, do not force or you'll tear the crust. Instead, run the tip of the skewer around the inner side of the rim to separate the aebleskive (and next time remember to oil more).] The still fluid batter will flow into the freed area of the slot (see middle photo of the bottom row above).

Turn the aebleskiver often to ensure even cooking. It takes several minutes. Be patient and stay next to the pan. Makes sure the aebleskiver cook but don't burn. Adjust the heat if the pan becomes too hot. Check doneness with a toothpick: if it comes out clean, the aebleskive is ready.  Transfer to a plate.

Oil the empty slots and repeat until all the batter is used. At the beginning, you may want to do 3-4 at a time so you can become familiar with turning the aebleskiver. Also, start with the amount of ingredients I specify: it is a manageable batch for a beginner. Then double it to accommodate more guests.

Aebleskiver are best eaten as soon as they are made. Should you have leftovers, re-heat them in the oven before serving them.

Also, you can add a little filling to aebleskiver (sweet or savory) or make them using sourdough starter: that's next on my list. 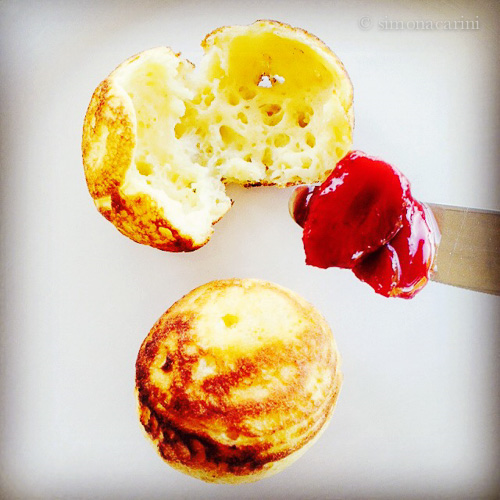 Now it's your turn: to participate in this installment of the World Culinary ABC:

1 The World Culinary ABC kick-off post.
2 Wikipedia entry for Minneapolis
3 Climate of the Twin Cities (click on the link at the bottom of the chart to see the temperature values in Celsius)
4 Minneapolis Biking Trails (and here is a map) and biking page on the City of Minneapolis website (the video gives a sense of the various trails and of how bikes are part of the city transportation options)
5 The Midtown Greenway (this Flickr group has photos of activities along the Greenway)
6 Minneapolis lakes and the Chain of Lakes map
7 Minnesota Center for Book Arts
8 Minneapolis is a food star in ascendance
9 Minnesota recipes
10 Wikipedia entry for Æbleskiver
11 Scandinavian immigration (Harvard University Library)
12 Aebleskiver Days
13 The Askov Rutabaga Festival & Fair

I contribute my aebleskiver to the 13th installment of the Abbecedario culinario mondiale (World Culinary ABC), an event organized by Trattoria MuVarA that will bring us to visit 27 countries of the world using the alphabet as guide. M like Minneapolis (USA) is hosted by me, Simona of briciole. The list of recipes contributed and contributors to the event / La lista delle ricette contribuite all'evento:

Thank you for the virtual trip to Minneapolis Simona and the very useful information given. I know nothing about Minneapolis cuisine although I hope when google searching to find some recipes with ingredients I can get in Greece.

Ciao Ivy. You are welcome. Remember though that the country is the US, so a traditional American recipe will be good, not necessarily from Minnesota.

Thanks for all the wonderful info about the food and the cities. I've never heard of aebleskiver, until now. Can you prepare it without the special pan? Your aebleskiver looks very yummy.

No, the gremlins didn't get you this time :) Glad you enjoyed the post. You really need the pan to make them round.

Thank you Simona for letting me know that I could post any American recipe. Here I go with my first recipe, which is a Red Velvet Cake.

.. and here is the last one for tonight.. http://kopiaste.org/2012/12/peanut-butter-cookies-and-the-traditional-desserts-i-made-for-christmas/

Grazie, Ivy. I added all three recipes to the list.

Grazie, Ivy. I added both recipes to the list.

Minnesota cuisine? You ARE brave, though these look delightly. A bit like a svingi, no? Minnesota bike trails are inspired. In Chicago, you just have a lot of stupid people dodging in and out of city traffic like drunken six-year-olds.

I like making new things, Connie, and aebleskiver were tempting. Definitely lighter.
I gather from your description that there are no bike trails in Chicago. I do remember pretty intense traffic there.

Hello Simona,
Sorry for being late to post my new recipe but there are so many things going on in my country right now. http://kopiaste.org/2015/06/greek-yoghurt-ice-pops-with-cherries-and-lavender/

No problem, Ivy. I added your recipes to the list when I saw the link on FB. Thanks!