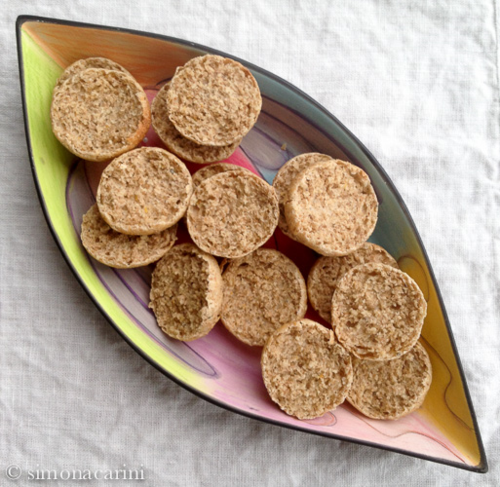 In the kitchen of the house in upstate New York where I spent a few days at a retreat last September, there was a bookshelf of cookbooks. My right hand pulled out Favorite Swedish Recipes by Emmie Berg and while I paged through it, the recipe for Round Rusks (Brutna skorpor) locked my attention.

Skorpor are popular Swedish rusks and a rusk is a light, dry biscuit or a piece of twice-baked bread. There is a version of rusk in many other traditions: for example, in Italy we have fette biscottate (twice-baked slices of bread). According to the wikipedia article on rusk, skorpor can be flavoured with herbs, dried fruit, nuts, or spices such as anise or cardamom.

The cookbook mentioned includes also a recipe for Rye Rusks. To make my version of Round Rusks I borrowed a bit from both recipes, added ingredients according to my taste and adapted the instructions to my bread-making habits. I used a small amount of sunflower honey as sweetener, and cardamom and orange zest to give the skorpor a nice nuanced flavor.

FTC disclosure: I have received the placemat free of charge from the manufacturer. I have not and will not receive any monetary compensation for presenting it on my blog. The experience shared and the opinions expressed in this post are entirely my own. 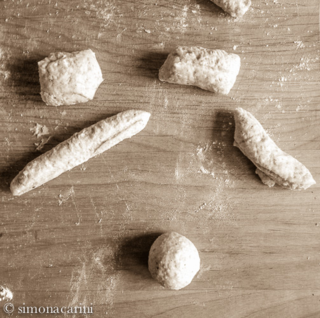 dividing the dough and rolling skorpor

How to prepare the dough
Measure all the ingredients and place them in a bowl. Mix with a a wooden spoon or a dough whisk until a shaggy dough forms. Cover and let rest for 10 minutes, then mix some more, until a firm dough forms.

Oil well a glass bowl or similar container where the dough will rise.

Lightly oil your working surface and transfer the dough onto it. Knead lightly for 10 seconds. Transfer the dough to the oiled bowl. With wet hands, letter-fold the dough and then flip it to oil the surface. Cover the bowl and place it in a warm place until the dough has doubled in volume (two hours or so, depending on the temperature).

How to shape round rusks
Line a baking sheet (half sheet size) with a silicone baking mat or piece of parchment paper.

Lightly flour a portion of your working surface and let the dough fall on it. With the help of a scale, divide the dough into 20 small pieces of 22-24 g each (depending on how many pieces you cut of the smaller size, you may get enough dough for 21 pieces).

Lightly flatten each piece of dough, letter-fold it, flip it and then roll it into a tight ball. Roll while tucking the dough under it, until the surface acquires a good tension without tearing. The working surface should be clear of flour, otherwise the roll slides on it, while you need some friction to create the tension on the dough's surface. [This short video shows my hands rolling a larger piece of dough, but should still give an idea.]

Place on the silicone backing mat or parchment paper in four rows of five, evenly spaced (adjust some to make space for the 21st, if you have it). Cover with a clean kitchen towel and let rise until a dimple made on the dough with your fingertip persists (an hour or so, depending on the temperature). 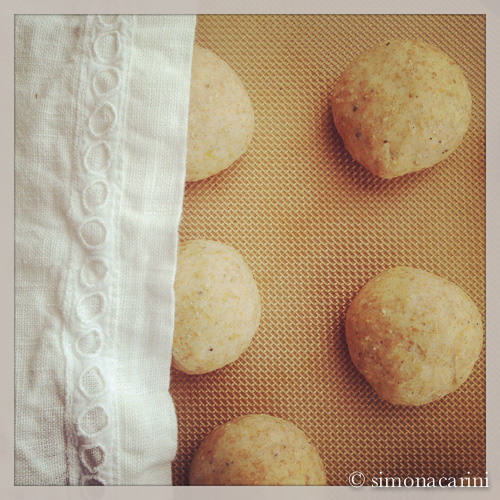 How to bake and crisp rusks
30-45 minutes after the beginning of the second rise (depending on how quick your oven heats up), preheat the oven to 425 F / 218 C. With a salad fork, I make a row of holes all around, then pry the skorpor open delicately.

Distribute the 40-42 pieces on the baking sheet and place in a 200 F / 93 C oven for 1-2 hours until they are crisp. Check them after 1 hour; in my oven, it takes 1 1/2 hours. Turn off the oven and leave the door ajar. Let the skorpor dry for up to another hour. Again, check them half-way through to prevent them from getting too dry.

Make sure you have some nice spread or creamy cheese to taste fresh skorpor. Store surviviors in an airtight container. 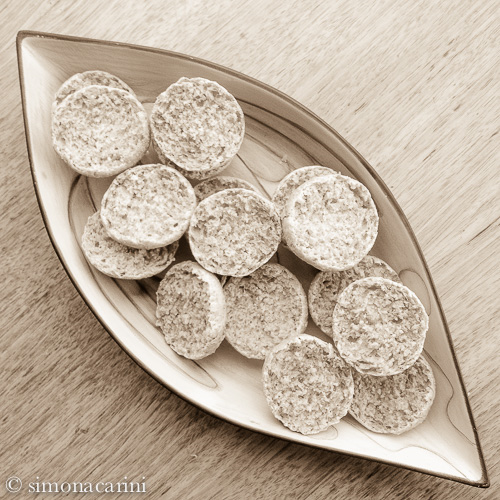 Crunchy, with the earthy flavor of rye (segale) and a hint of orange and cardamom, it is clear from the first bite why these morsels are popular. They have been an instant hit in our household and besides being good, they are fun to make (signed: skorpor's serial baker).

I am sending my skorpor to the January edition of Panissimo, a monthly event created by Barbara of Bread & Companatico and Sandra of Indovina chi viene a cena? and hosted this month by Sandra.

... to the monthly showcase Sourdough and Yeast by Wisla (in Polish).

The parting shot goes to edition #154 of Black and White Wednesday - A Culinary Photography Event created by Susan of The Well-Seasoned Cook, now organized by Cinzia of Cindystar, and hosted this week by Lynne of Cafe Lynnylu.

The photo was shot in color with my iPhone and then converted to sepia (Lightroom preset Sepia Tone).

The gallery of images contributed to the event.

I've had commercial versions of these, but yours look much nicer!

Thank you, Alicia. They are fun to make and a pleasure to crunch :) Happy New Year!

Simona -- I have never heard of these but they look good, and I can imagine whose kitchen you found the cookbook in :)

They are nice to put on the table with spreads, Cathy. It was during the retreat after LongHouse, so the house on the hill ;)