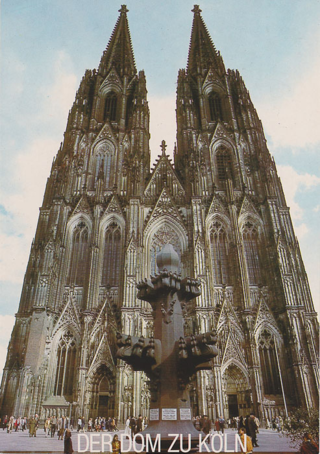 highway to the sky

One morning in early March, a good number of years ago, I boarded a train at Milan's Stazione Centrale. After crossing the border, the train glided across Switzerland, breaking the silence of meadows and woods sleeping peacefully under a thick blanket of snow.

After the sun set, it became more difficult to follow the progress of my journey and I settled with my book. Around 10 pm, the train arrived at Cologne Central Station (Köln Hauptbahnhof) and I got off. The brisk air carried the memory of recent rain.

I crossed the almost deserted main hall with my trusted companion: my beloved blue backpack. I knew what I would do once outside: look for a taxi and practice my best German to provide the driver with my destination address.

I was not prepared for what happened when I stepped out onto the front sidewalk: The majestic Cathedral rose in front of me against the darkness of a starless night, serious in its dark gray attire, serene in its elegant Gothic style, gracious with its pointed arches and lofty spires, reassuring with the wisdom of its old age.

I a had no idedid not know that the cathedral was so close to the train station and the shock of surprise was the sweetest welcome I could have received.

I stood there for a time that stretched outside human time to look at one of the most beautiful buildings ever built, an example of human ingenuity, sense of place and space, faith and longing for the sky.

The precise moment when my whole body and mind stopped mid-breath is the lasting impression of my first visit to Germany. Everything else I can tell you about the country is a combination of experiences and knowledge: that moment was pure and intense emotion.

I did not have a camera back then, so I don't have a physical image of what my eyes saw. This photo is an excellent approximation. When I was finally able to awaken from the daze in which I was immersed, I realized that I was looking at one of the sides of the cathedral and that the facade (facciata, see top photo) was to the right (this aereal view shows the relative position of the two buildings). 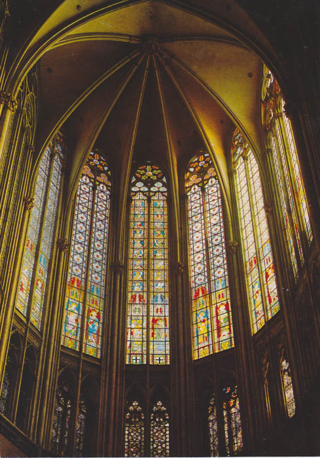 A few days later, I entered the Cathedral. Being inside a Gothic church was not a new experience for me. Beside the Gothic churches of my native Umbria, I knew well Milan Cathedral (duomo di Milano), being at the time a resident of that city. But the pull upward that I felt once I entered the Cologne Cathedral was much stronger than any I had experienced before. I immediately started looking up and kept my eyes there while walking around.

This would have worked reasonably well had I been the only visitor of the sacred space. But as there were a number of other people and as all of them were walking around and looking up, bumping against each other was unavoidable. Nobody got upset, though, as we all realized that the occasional rough stop was an acceptable price to pay for the amazing feast the eyes were relishing while scanning the upper reaches of the cathedral.

The two images above are from postcards I brought back from my trip. Beside images of the Cathedral, I have some from my visit of the Roman-Germanic Museum (Römisch-Germanisches Museum). Below is one of them. 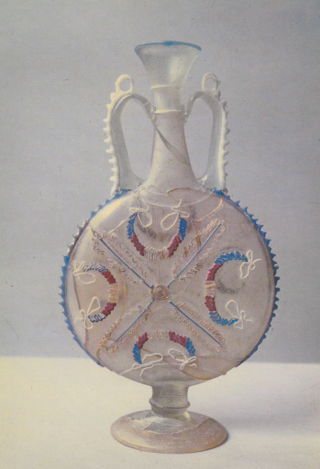 I spent three weeks in Cologne studying German. I owe to the school some nice memories I have from my stay, like a cruise on the Rhine on a boat of the water police (Wasserschutzpolizei). My visit to Cologne occurred before the reunification, so the capital was still Bonn, which I visited as homage to Beethoven.

I went back to Germany a few years later, during a summer vacation with three friends: we drove from Italy to Norway and back so we had a chance to see quite a bit of Germany. We visited Ulm (where there is another fabulous Gothic church, the Minster, and where Albert Einstein was born), Göttingen, Heidelberg, Lübeck and Baden-Baden.

My most recent visit to Germany was to Augsburg. But when I fly to Italy, I usually change plane in Frankfurt or Munich (there is no non-stop flight between San Francisco and an Italian airport), which allows me to stock up on my favorite chocolate-covered marzipan.

Our virtual tour of the European Community is in Germany for three weeks starting today and I am the host. If you would like to join us for this stop of the journey, all you have to do is publish a recipe chosen from German traditional dishes. Do you need a bit of help to get your imagination started? On this wikipedia page there is a useful list.

In your post, please reference the event, Abbecedario culinario della Comunità Europea (European Community Culinary ABC) and to the hosting blog by linking to this announcement.

There is one dish that is off-limits: Sächsische Quarkkeulchen (or Quarkkäulchen), the dish I am presenting in this post. (Please, refer to this post for details of why this is so.)

To submit your contribution (and you can submit more than one), please use the Inlinkz form at the end of this post. Archives posts are accepted, but please update them with the information of the event.

Important: the form asks you for the URL of the post, the name (title) of the post and your email. The latter won't be published, but it's there for me to contact you, if necessary. Should you have any problems with the form, please send an email to simosite AT mac DOT com. You can also leave me the URL of your contribution in a comment to this post.

The deadline is Sunday, December 29 at midnight PST.

Feel free to contact me should you have any questions regarding the event and its  rules.

And now, let me tell you about Quarkkeulchen 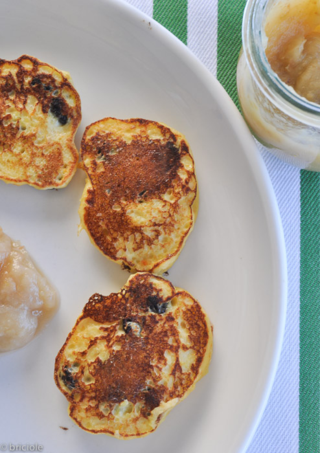 In recent posts (like this one), I have mentioned making Quark cheese at home. The immediate reason for that cheese-making adventure was to make Quarkkeulchen.

Quark is a fresh cheese common in Germany, which is where I ate it first and last — before tasting my own. Making Quark at home is quite easy: take milk, add culture (see the recipe on this page, which contains a detailed explanation and lists various options for the culture) and let it do its work, then cut the curd, drain and you are done. 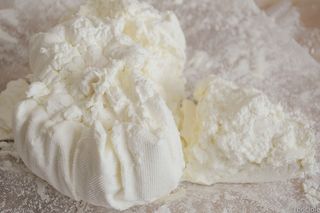 Quarkkeulchen are Saxon pancakes made with potatoes (patate) and Quark. They require a bit of advanced preparation but are worth the effort. I honestly don't think I'll be able to go back to regular pancakes after tasting Quarkkeulchen.

In preparation for my hosting duty, I read a number of recipes for Quarkkeulchen and made them many times, tweeking a detail or two every time, for the joy of my breakfast-loving husband. Among the various sources of inspiration, I want to recognize in particular the recipe by Meeta of What's for Lunch Honey?. Her post is informative and her photos are gorgeous. 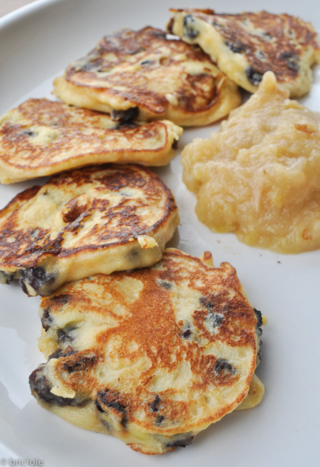 My version uses the same amount of potatoes and Quark and relies on plump California raisins (uvetta) for sweetness. I serve Quarkkeulchen with my applesauce, which, based on my reading, is a traditional accompaniment.

Note: if the Quark you use is very moist, drain it a bit by placing it on a cloth-lined strainer placed over a bowl (to catch the whey). Weigh it after draining. If later on, before you add the beaten egg white, your batter is quite stiff, add back as much of the drained whey as needed to soften it.

Break the egg and separate yolk and white.

Boil at least 100 g potatoes until tender. For efficiency's sake, I usually boil more and use what I don't need for this recipe to make mashed potatoes. As soon as you can handle, peel and run through a ricer or mash finely. Weigh the amount needed. Place in a bowl and let cool.

Add egg yolk, sugar, Quark, flour and orange zest to the potatoes and stir well. Add the raisins and stir in.

Whisk egg white with the pinch of salt until firm. Gently fold the egg white into the batter.

Let the batter rest in the refrigerator for 20 minutes.

Using a soup spoon, drop about 2 tablespoons of batter into the hot skillet and gently flatten with the back of the spoon to form a circle. Repeat to make four more Quarkkeulchen. Fry until they are golden (two minutes or so) then flip and repeat on the other side. Transfer to the warmed plate and keep in the oven.

Oil again the skillet if necessary. Use the rest of the batter to make another batch of five Quarkkeulchen and cook as described above. 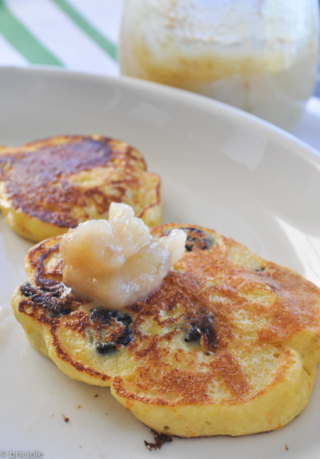 With this post, I introduce the 17th installment of the Abbecedario culinario della Comunità Europea (European Community Culinary ABC), an event organized by Trattoria MuVarA that will bring us to visit 26 countries of the EU (all except Italy) using the alphabet as guide. Q like Quarkkeulchen (Germany) is hosted by me, Simona of briciole.

My recipe for Quarkkeulchen and the list of recipes contributed to the event.

Simona- what a fantastic recollection of your first impression of Germany. As you described feeling comprelled to look up, I too found my gaze wandering upward.

Thank you so much, Annelies. I am glad you liked my recollections. It was such an emotional moment.

A beautiful cathedral! I'd love to visit Köln.

Those Quarkkeulchen look and sound divine!

Ciao Rosa. I hope you get to visit it: it's a very interesting city. Thanks!

Special breakfast, indeed! Had same experience when I stepped out subway station in Milan and saw the magnificent duomo before me. I gasped. I'll always remember that sight. :-)

Ciao Paz. I can imagine that happening. You come up the stairs and there it is, in all its magnificence.

I love the Quarkkeulchen you are making. It has great flavors. I like all the ingredients, cheese, raisin and orange. Probably it will work well on yam and sweet potato. Ah…almost forget the applesauce, thinking pineapple jam too. :)

Glad the recipe got you thinking about alternative ingredients, Yung. All your ideas sound interesting.

Simona, I love how you described stopping mid-breath when you first viewed the Cathedral at Cologne. You summed up in a very few well-chosen words the effect that great art and architecture has on us! I felt that way recently when I saw the Basilica at Ravenna, Italy.

Hi Molly. All that gold has an amazing effect, for sure.