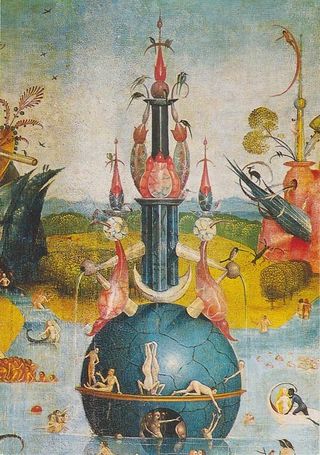 detail of: The garden of earthly delights

When I was in Madrid for a conference a good number of years ago, I spent an afternoon at the Museo Nacional del Prado. It was an amazing feast for the eyes: more sumptuous than expected and completely satisfying.

One of the most interesting works I admired that day was Hieronymous Bosch's The Garden of Earthly Delights. I lost track of time as my eyes lost themselves in the intricate details of Bosch's vision. I still have a few postcards from that visit and I scanned my favorite one to introduce this post.

As you may have guessed, our virtual tour of the European Community has arrived in Spain. As a result of a complicated train of thought that had as main ingredient my knowledge of Spanish history, I decided to look for a Jewish dish. I soon found a source of information in the book "A Drizzle of Honey The Life and Recipes of Spain's Secret Jews" by David M. Gitlitz and Linda Kay Davidson.

When Iberian Jews were converted to Catholicism under duress during the Inquisition, many struggled to retain their Jewish identity in private while projecting Christian conformity in the public sphere.

In the Eggs section of the book, the recipe for María González Eggs and Cheese Casserole with Eggplant (Cazuela de Huevos y Queso) immediately captured my attention. On page 77 and 78, the authors explain not only who María González was, but also the history of cazuelas. This is a short excerpt:

Originally, these egg dishes were prepared on top of the stove: thus the term fritada, fried. Later... the dishes were baked, and in many places the term for these dishes changed to cujada (coagulated).

The very last line of the recipe states that any vegetable can be substituted for the eggplant, so I immediately decided I would use some lovely cauliflower (cavolfiore) from Redwood Roots Farm. 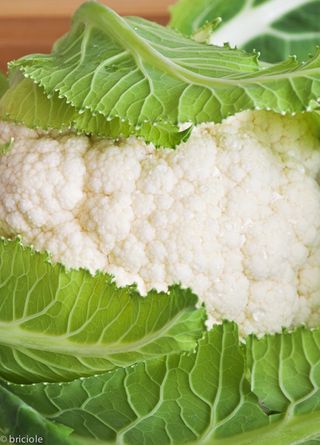 The preparation of the eggplant described in the recipe does not apply to cauliflower. I decided to roast the florets, which would keep them crisp. I then adjusted the quantity of the spices to my taste. Finally, I used some of my homemade Quark cheese: not quite Spanish but quite tasty. The result was a lovely light dish, where the crisp cauliflower is suspended in a light egg matrix. 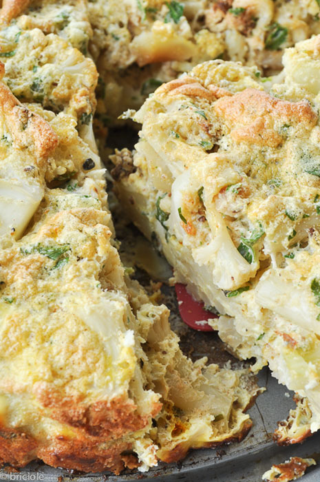 a contrast between soft and crunchy

For the next rendition, I adjusted the recipe to use a vegetable of a consistency closer to that of mashed eggplant. In my crisper, I had a small zoo of vegetables: broccoli florets, a tiny cauliflower head, two carrots (carote), red beet greens and their stems and chard stems. I decided to steam all of the vegetables together. I sometimes do wild things because I like to get wild results. This one was wildly good — though less photogenic than its predecessor. The texture was soft throughout, reminiscent of souffle. The flavor of the various vegetables blended in a perfectly pitched choir (coro). 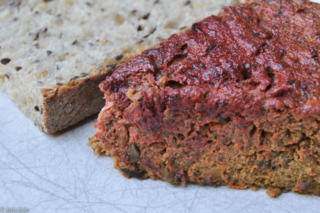 note how the color changes

I liked both versions of the recipe so I am presenting both.

Ingredients for the cauliflower version:

Ingredients for the mixed vegetable version:

Note 1: the original recipe calls for 1/2 teaspoon of ground black pepper and 3/4 teaspoon of ground cinnamon. I toned down both spices in my rendition. I used saffron in the cauliflower version but not in the mixed vegetable version: consider using it or not, depending on your choice of vegetable(s).

Note 2: The original recipe calls for 1 cup cubed semisoft cheese, cut into 1/2-1 inch cubes, so if you don't have Quark cheese, you can substitute a semisoft cheese of your liking. However, I recommend cutting it into smaller cubes, so you can distribute it better.

Start with the eggs
Break eggs and place yolks and whites in separate bowls. Choose a large bowl for the yolks, since that's where you will end up with all the ingredients.

Spray cauliflower with olive oil using a mister and stir well. Bake for 15 minutes, then stir. Bake for another 15 minutes or so. The florets should not brown. Take out of the oven and let cool.

How to prepare the mixed vegetables
Trim all the vegetables, cut into pieces according to their nature (e.g., broccoli and cauliflowers in florets, carrots in coins, chard stems into pieces, etc.) and steam until tender. Let cool, then puree (using a food processor or immersion blender), possibly leaving some of the vegetables in small chunks rather than smooth, to give a bit of varied texture to the casserole.

As baking vessel I used a 9-inch / 23-cm round springform pan. You can oil the bottom or line it with parchment paper. Oil the sides as well.

Beat yolks until creamy. Add saffron, if using and stir.

Place the (empty) pan in the oven.

Mix the spices and add them to the yolks, then add Quark cheese and blend. Finally, add the cauliflower and chopped parsley OR the mixed vegetable and stir well. 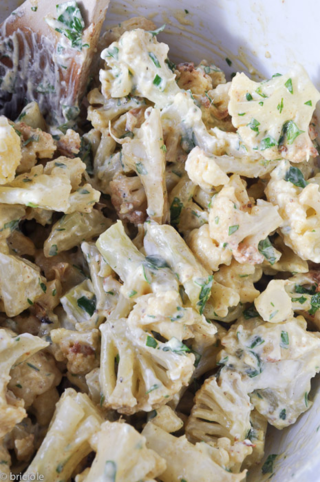 before adding the egg whites

Bake for 30-35 minutes or until the casserole is set and its surface is golden. Note that the concept of "golden" may need to be adjusted, depending on the type of vegetables that you use. It applied as is to cauliflower, but when it came to the beet-colored vegetable mix, it was a more suble effect. The important thing is that the casserole is set. You can use a toothpick to check for that: it should come out clean when inserted at the center of the casserole.

Take the casserole out of the oven. Let sit for a few minutes, then run a thin spatula around the edge and remove the ring. Serve sliced at the preferred temperature: "This casserole is good hot or cold, but the flavors are best if it is served at room temperature."

My casserole participates to the 16th installment of the Abbecedario culinario della Comunità Europea (European Community Culinary ABC), an event organized by Trattoria MuVarA that will bring us to visit 26 countries of the EU (all except Italy) using the alphabet as guide. P like Paella (Spain) is hosted by Francesca of Burro e zucchero.

On this page you will find the recipe for Paella and the list of recipes contributed to the event.

This is also my contribution to edition #414 of Weekend Herb Blogging, an event started by Kalyn of Kalyn's Kitchen, now organized by Haalo of Cook (almost) Anything at Least Once and hosted this week by Haalo herself.

That sounds really delicious! The section on the Jewish food traditions in Claudia Roden's book on Spain is fascinating.

Thank you, Alicia. I saw some of her recipes as well. I really like this casserole: it has the good qualities of souffle without the extra work of making bechamel sauce. Definitely a keeper.

I think I will make the cauliflower version soon. Too tempting!

Thank you Sanhita. I am glad you are tempted.

Isn't it interesting how the tastiest foods are not always the prettiest. One of the challenges—and frustrations—of food blogging. Hopefully, readers will look past looks once in a while!

I hope so, Frank. When I look a dish that is very good but not particularly pretty, I think it is a reminder to not let the surface of things unduly influence our judgement, but to consider their substance.