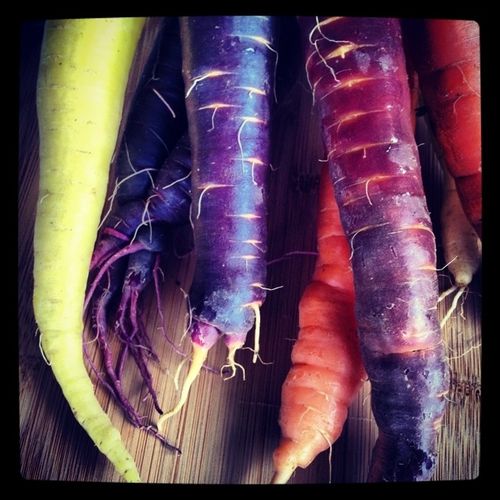 look to the rainbow

Brilliant blueberry or reddish purple, bright orange, pale yellow or an ivory that, the first time I saw it, made me wonder whether I was looking at a parsnip that had smuggled itself into carrot-land: When I am in the mood for technicolor carrots, I know to which stall to direct my steps at the farmers' market. One recent Saturday, in the early morning sunlight cooled by wisps of coastal California fog, I picked up by the stems a bunch of carrots with their tops still intact. I held it up for a few seconds — the uncombed ponytail of greens brushing my hands — trying to decide whether to photograph it while still in the company of its siblings, or to wait until we reached my vegetables' portrait studio (a.k.a., my kitchen).

As my brain was quickly weighing pros and cons of the options, the word “weird” hit my right ear. By stressing the “ei” and lounging for a moment on the “r,” the word “weird” can be easily turned into a verbal weapon. It is easy for me, a non-native English speaker, to tune out of background conversations at the market (and elsewhere), but that “weird” bullet burst my defensive soundproof bubble.

I kept my eyes fixed on the carrots for fear they would spear the person who had shot the word, a young woman, by the sound of the voice. “What an unpleasant word,” I thought. And then I saw it, the abyss that opens between the judge and the judged the moment that word is out.

I now know that I should have said something, I should have kindly but firmly disabused the young woman of her perception by explaining to her that what she was seeing were in fact historical carrots. Our ancestors ate purple, yellow and white carrots. Orange carrots were neither the first cultivated carrots nor the only existing variety, and their predominance is an accident of relative recent history.

“This diverse bunch of carrots is beautiful and I hope you recognize it as such,” I should have said. “Embrace diversity, bring these colorful carrots home and make a salad with them. You'll realize that, although of different colors, they are crunchy, juicy, sweet carrots like the 'normal' orange ones. There is nothing weird about rainbow carrots — nothing at all.” 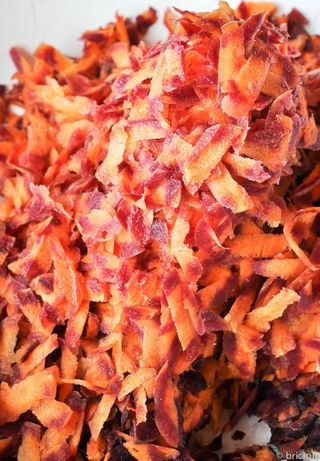 purple outside, orange inside

I didn't say anything and, like so many times in life, the moment flew by, and I lost a chance to move a pebble to make the world a better place. The fact is that the neat speech I delivered in the previous paragraph came to me a few days after the carrots' episode as a result not only of it but also of some reading that made me think about ways in which evil manifests itself (see here and here).

So much evil in the world is caused by regarding another person as “less” or inferior, because of a physical or cultural trait. The first judgment, which seems to be almost inconsequential, in practice can easily pave the way to discrimination, oppression, persecution and, ultimately, in too many cases, physical elimination — with each step justified by the previous one.

Placing humans and the vegetable world on the same level seems preposterous, but the seed that made my thoughts sprout started that morning at the farmers' market, amid piles of neatly displayed vegetables. My meditation on evil brought into relief my personal responsibility in stopping any form of negative judgment before it has time to start rolling down the mountain and cause an avalanche of persecution — including judgment passed upon carrots other than orange.

Now that I have clarified my thoughts, I'll be better equipped to defend the next vegetable that gets mistreated in my presence, and hopefully, and more importantly, the next person or group of people.

In early September, we visited ancient Ephesus, on the west coast of Turkey (Turchia). After walking under a glaring sun around the stately ruins of what was once one of the most important cities and ports of the Mediterranean, having lunch in the shade of wide-crowned trees felt like a gift from the gods we saw celebrated in various artifacts in the city. We were served a spread of mezedes. Among the small plates, the bowl of carrot salad with yogurt became a prime target for my husband's appetite and mine. It is a simple combination of sautéed shredded carrots and the dense local yogurt, whose light tartness balances the carrots' sweetness. The salad is gently spiked by a hint of garlic. It's addictive. 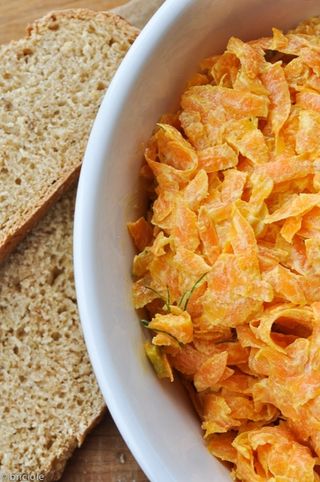 The carrots used at the restaurant were the more common orange ones, but this is a perfect dish to let rainbow carrots show off. As you can see from the photos, I have made this salad a number of times. When I do not have rainbow carrots available, I use orange ones. The recipe I follow was inspired by that for Carrot Salad with Yogurt on Almost Turkish Recipes. 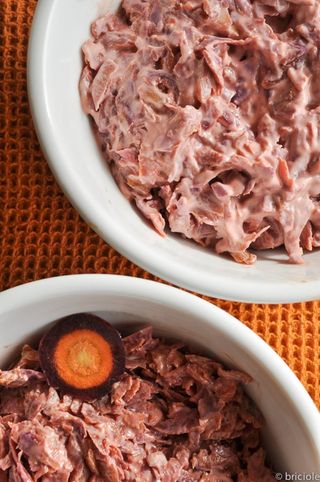 I prefer to sauté the garlic together with the carrots to mellow out its flavor, but you don't have to agree with me. Also, between carrots and yogurt, I like to tip the balance towards carrots, while my husband favors more traditional proportions, so after dressing the salad with less yogurt, I divide it into two bowls and add more yogurt to my husband’s portion.

Print-friendly version of recipe for Turkish carrot salad with yogurt

Note 1: if you use regular plain yogurt, drain it first by pouring it into a cloth-lined colander set on a bowl (to catch the whey). Let it sit for 20 minutes or so, then add it to the carrots. (The whey can be used to make bread or in a soup.) Weigh the yogurt after draining.

Note 2: the salad we ate in Turkey did not include dill (aneto), while the recipe I consulted does. I used the last dill from my garden (1/2 tablespoon) the first time I made the salad. The following times, I made it without. Try it both ways and decide which one you prefer.

Scrub carrots well and scrape surface to remove a thin layer of skin. Grate carrots using the extra-coarse side of a hand grater.

Heat oil in a skillet. (Alternatively, if you have an oil mister, coat well the bottom of the skillet.) If you prefer a mellower garlic flavor, add it now and stir. After 1 minute, add the grated carrots and stir well to coat. Sauté, while stirring, until tender. If the carrots get dry while they are still on the crunchy side, cover the skillet and continue cooking on gentle heat for a few minutes.

Empty skillet in a bowl, season carrots with a bit of salt and toss. Add dill, if using, and, if applicable, minced garlic. 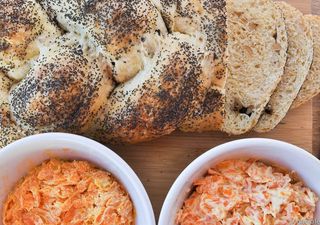 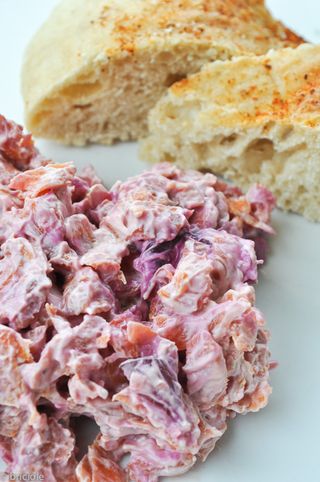 This is a lovely salad, light and refreshing. It can be served as an appetizer, mezze-style, or as a side dish. In the photo above, I served it with mana’eesh the lovely Middle Eastern flat bread, which also figures in the list of our household’s addictions — especially now that it comes out of a wood-burning oven (more on this soon). (The breads in the other photos are Swedish rye bread and raisin walnut braided bread.)

The caption of the top photo is the title of a song from Finian's Rainbow, one of my favorite musicals. Here's the refrain:

Look, look, look to the rainbow
Follow it over the hill and the stream.

Look, look, look to the rainbow
Follow the fellow who follows a dream

This is my contribution to edition #408 of Weekend Herb Blogging, an event started by Kalyn of Kalyn's Kitchen, now organized by Haalo of Cook (almost) Anything at Least Once and hosted this week by Haalo herself.

What a wonderful way to show off those color-packed carrots!

Can't wait to read about the wood burning oven - the salad looks so good too, I can see it would be very addictive. Thanks for all your support of WHB!

The wood-burning oven is an interesting adventure, Haalo. You are more than welcome.

Simona -- I have been buying heritage carrots just like these at my farm CSA. I plan to make a carrot tian with them. The feathery green tops are so pretty, it's a shame to cut them off. More power to carrots!

Hi Cathy. I have read here and there about attempts to use the carrot tops. This is one recipe that I have eyed but not yet tried: http://www.npr.org/2013/03/07/173722085/finding-flavor-in-the-castoff-carrot-top

I really like carrot salad made simply with olive oil and a bit of lemon juice. I also like tzatziki. This sounds something like a cross between the two, and I'm sure I'd love it!

Thanks for the suggestion Simona. I've already tossed the carrot tops, but will check this out for future use. cathy

Ciao Frank. I hope you give it a try. It takes a bit longer to prepare than a straight simple salad, but it's worth the effort.

You are welcome, Cathy.