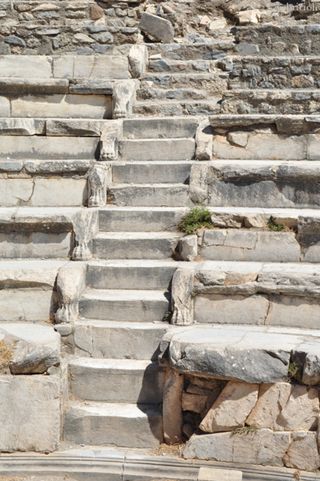 please, take a seat (in the Odeon)

The lure of walking along the streets of what in antiquity was a major city is irresistible. What was it like to live there when those streets were full of people, commerce and art? The imagination wants to run with the inspiration it finds in columns, statues, floor plans, mosaics, and other artifacts, both large and small, from the bygone days of splendor.

The ancient city of Ephesus, on the western coast of Turkey (near Selçuk) beckoned me while vacationing in Samos. Three of us embarked on a day trip to visit the impressive ruins of what at some point was one of the largest cities in the Mediterranean world.

We followed our guide along the wide streets of Ephesus and learned about its history — its rise and fall. I used my imagination to add architectural elements where they were missing to build in front of my eyes temples, fountains, houses, theaters.

Follow me on a short and quirky tour of the city, a sort of appetizer: if you visit Ephesus, you'll be in for a grand meal.

We entered the city from the Second Entrance (on the far right on this map).

The Odeon or Bouleuterion (see top photo) was a small theatre that had double function: it was used for the meetings of the Boule or the Senate and as a concert hall. It was roofed (see #2 in this reconstruction). 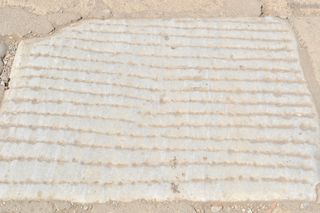 We walked on the wide main road flanked by ruins in various stages of restoration. The city looks like a collection of puzzles, which, taken all together, form an enormous challenge to human patience. 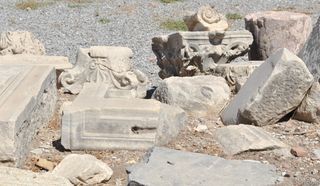 a few pieces of the giant puzzle

The brilliant September sky acted as a special backdrop to some of my photos. 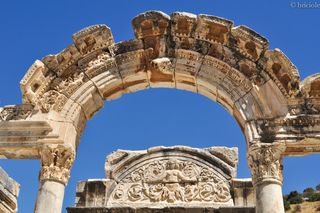 Medusa protects the Temple of Hadrian

The effort needed to use the available ruins to reconstruct in my mind huge, complex buildings was intense. To give my imagination a break, every now and then I focused on small details, like kittens 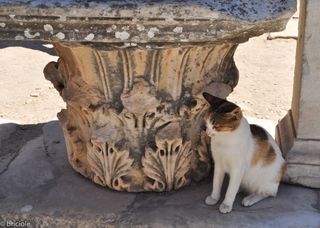 kitten posing next to a Corinthian capitol

or the patterms on rich mosaics 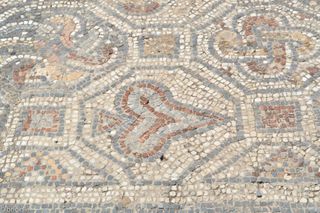 Winged feet reveal the character on the stone to be Hermes. 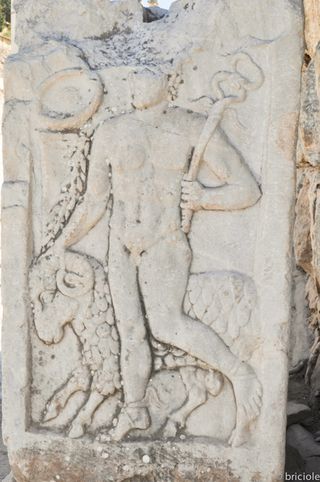 One of the most amazing buildings was the library of Celsus, whose facade I portrayed from many angles (again using the sky as brilliant backdrop): it was quite inspiring. 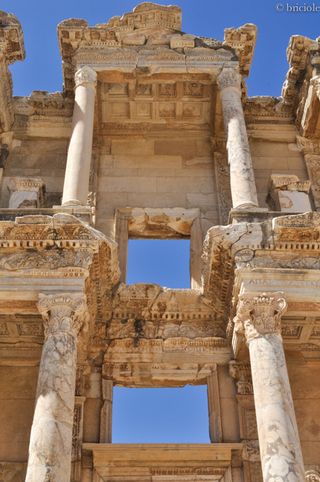 Built in 117 AD by Gaius Julius Aquila in honor of his father, Gaius Julius Celsus Polemaeanus, a governor in the Roman province of Asia, it is believed to have stored 12,000 scrolls.  The library was also Celsus’ tomb and at the time it was the third most important after Alexandria and Pergamum. [source]

The idea of a library being someone's monumental tomb strikes me as the height of civilization. 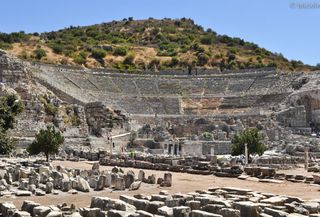 the great theater could seat 25,000 people

We started our visit at a small theater and we ended it at the great one. How I wished we could have seen a performance there!

what's left of one of the seven wonders of antiquity

It takes a lot of imagination to build around that lone column the Temple of Artemis. Fortunately, there are signs that gives imagination a hand. In the middle background, we could see the Isa Bey Mosque and, further back, Selçuk's castle.

After our stroll under the sun, we had a lovely late lunch of mezedes sitting outside, under the umbrella of some trees. I would have liked to question the chef to learn the recipes of what we ate: everything was flavorful and light. The carrot and yogurt salad was my husband's favorite and mine too. Our travel companion favored the eggplant and tomato salad. We finished our meal with a slice of watermelon, my breakfast fare and dinner dessert all week long.

To learn more about the ancient city of Ephesus, here are a few additional links:

Posted by Simona Carini on September 20, 2013 in Travel | Permalink

Would you look at that sky? Magnificent! It's definitely on my list (never ending) of places to go.

It was a spectacular day, Alicia, and a fascinating visit.

What a lovely travelogue. You made me want to visit Ephesus so badly.

Thank you, Sanhita. I am glad you enjoyed the post.

Hello Simona. How lovely to read your post about Ephesus. You took some very well thought out photographs. They are beautiful. I too visited Ephesus, as part of a group of family and friends. It was an intense and very stimulating experience for me. I walked the streets of the ancient city and I tried to imagine the long gone inhabitants going about their daily business in the shops and at the Odeon. I was amazed at how well preserved some areas were. One thing I found fascinating (and regrettable also), was that parts of Ephesus were dismantled and the materials were used to build Christian temples, but then again that was a common occurrence at pagan sites during Byzantine times. The latrines at the Odeon are still in more or less pristine condition. My father got a kick out of that, and sat on one of them. We took his picture and we still have it, him looking at the camera, laughing. Dad has passed now, but that memory and the picture which accompanies it are still with us to enjoy.
Thanks for the beautiful post!!!

Dear Ana, so good to hear from you. I thought about you while we were in Greece :) We also admired the latrines in Ephesus. Romans certainly knew about taking care of their bodies. Reusing material was widespread. It happened in Rome as well. It is of course very sad that those people valued the material more than the building.