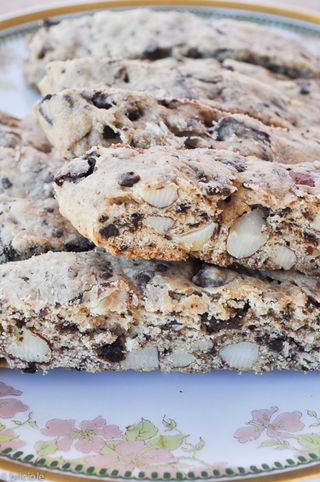 please have one, or two

Biscotto is a word of Latin origin that means twice-baked: the dough is baked, cut into slices and baked again. (To be precise, cooked means cotto, but in Italian we don't have a specific verb for cooking in the oven; "to bake" is cuocere al forno, literally: to cook in the oven.)

From describing a cooking procedure, the word biscotto came to indicate a baked product, crunchy and fairly dry in texture (see a photo in this post). Nowadays, biscotti are not necessarily twice-baked (though some of them are, like biscotti di Prato). In Italy, you can find shelves full of biscotti in grocery stores: we call them frollini, novelllini, petit, oswego (or osvego), etc.

When I moved to California, I did not find in the local stores any of the biscotti I was used to eating. On the other hand, I found plenty of 'biscotti,' that is, variations on the theme of a twice-baked product that up until then I had called cantucci. 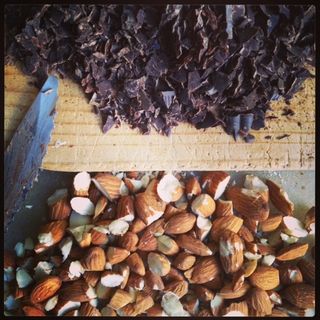 I shared my recipe for the lovely treat in my previous post on biscotti. However, I kept experimenting with variations and I think that the most recent version warrants sharing.

The most recent change to the recipe was inspired by the current Cook the Books Club selection: The Baker's Daughter by Sarah McCoy. One of the stories narrated in parallel in the novel is set in Garmisch, a mountain resort in Bavaria, during the last year of World War II. The other story is set in El Paso, Texas, a few years ago. The link between the two locations and stories is Elsie, the title character.

On this page, you can find a short description of the novel and an evocative video that brought a smile to my face, because, honestly, does not describe the way I read the novel. Writers know that when they send their words out into the world, the way the world reads them is outside their control.

The novel and events that occurred while I was reading it made me think a lot about evil and what I do (and can do in addition) in my small sliver of world to counter its effects. At the beginning of a manifestation of evil, there is the judgment of another person to be "less" or inferior, because of his or her gender, race, physical characteristics, religious or political belief, sexual orientation, etc. Then, each step justified by the previous one, the judgment becomes oppression, persecution, and finally physical elimination. This happens every day around us, so every day, I need to look for signs of it and for ways in which I can do my part to stop it.

I will return to this topic soon, since the book I read after The Baker's Daughter made me continue my reflection on evil.

In the novel, the baker of the title prepares cookies called Lebkuchen as a special treat for Christmas, one for each member of the family, near or far, alive or dead. There is a recipe for Lebkuchen Hearts at the end of the book, but it is way too sweet for our household's taste. As I could not let go of the idea of baking a lightly spiced treat, I thought of adding a bit of Lebkuchengewürz to my biscotti.

The Lebkuchengewürz is a ground mix where the prevailing spice, in terms of quantity, is cannella (cinnamon). The one I used contains also chiodi di garofano (cloves), coriandolo (coriander), cardamomo (cardamom), and anice (anise). (In the past, I used Lebkuchengewürz to make Lebkuchen Loaf Cake.)

Other differences between the new version of biscotti and the "old" one are the use of flaxseed meal and water as substitute for one of the eggs, and the substitution of some of the whole-wheat pastry flour with whole-grain millet (miglio) and sorghum (sorgo), which are both gluten-free. 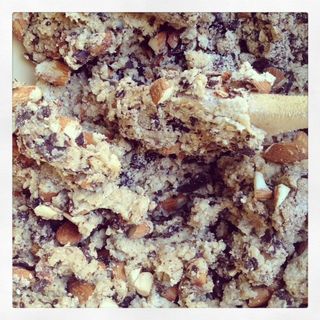 Note: if you cannot find those two flours (either, or both), you can try using one or two other gluten-free flours, like quinoa or buckwheat.

Do ahead
Place butter in a bowl and leave it to soften.

Place flaxseed meal in a ramekin and add hot water. Stir and let sit for at least 10 minutes. It will turn into a gelatinous mass.

Make the biscotti dough
Preheat the oven to 350 F / 177 C. Line a baking sheet with a silicone baking mat or parchment paper.

Cream butter and sugar, then add egg and flaxseed meal and beat in. The result won't be quite homogeneous, and that is fine.

Add in succession the flours (ingredients #6 through #9), sifted, baking powder, salt, Lebkuchen spices and vanilla extract, stirring after each addition. Add the chopped chocolate and almonds and stir until roughly incorporated (see photo above).

Turn the dough onto a floured surface and knead it lightly until it comes together and can be shaped into logs. Sprinkle dough and working surface with the additional all-purpose flour, as needed, to prevent sticking.

Bake the biscotti
Divide the dough in half and roll each piece until it is about 12 inches / 30.5 cm long, then move it to the baking sheet. Flatten each log with your hand so that it is about 3 inches / 7.5 cm wide and 1/2 inch / 1.25 cm thick. Bake for 25 minutes. The logs will rise a bit and turn light brown. Take the baking sheet out of the oven. Turn the oven temperature down to 300 F / 150 C and let the logs cool for 10 minutes or so.

With a bread knife cut the logs into slices no more than 3/4 inch / 2 cm thick. Move the slices back onto the baking sheet, standing up, leaving a bit of space between each other. Bake the slices for 14 minutes or until desired crispness. Check the biscotti: If the bottom is becoming dark brown, stop the baking, otherwise continue for two more minutes, then check again.

When done, take the biscotti out of the oven and let them rest and cool for at least half an hour before tasting. 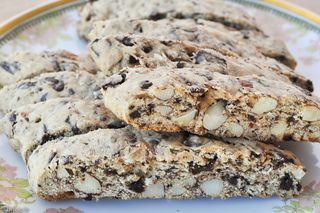 A balanced combination of crisp and crunchy, bitter and sweet, these biscotti acquire a new flavor dimension thanks to the touch of warm spices. They keep well, travel well and are well-liked.

Final note on the novel: through it, I learned about Lebensborn, a Nazi program to breed Aryan children having specific characteristics, and decided to read more about it. The following articles in Der Spiegel, the NY Times and BBC News talk about how, a few years ago, children of that program decided to break the silence surrounding their birth and early years.

This is my contribution to the current edition of Cook the Books, hosted by Heather of girlichef. (You can find the guidelines for participating in the event on this page.)

This is also my contribution to the 20th edition of Novel Food, the literary/culinary event that Lisa of Champaign Taste and I started some time ago and that I continue to host.

Very thoughtful comments about the book. I enjoyed reading it and certainly, learning from it. That Lebensborn program just seems unbelievable.

Thank you, Rachel. That's why I wanted to read more about it and it was interesting to read about what happened to the children who survived it.

The Lebensborn program was a surprise to me, too. I thoroughly enjoyed the book and love the look of your cantucci. Che bellissimi!

I love making biscotti especially for the holidays. Can't wait to read you other posts.

Thank you, Camilla. I am glad you like them :)

Me too, Debra. They make a great gift.

wow!
I never considered adding lebküchen spices to other biscuits, let alone cantucci...your idea is marvellous
Going into bookmarks in this right moment ;)
Thank you and have a lovely day :)

Beautiful results, especially love the texture of hand-chopped chocolate! I've been told that using baker's ammonia is the Italian secret to crisp biscotti, are you familiar with using it?

Thank you for the recipe! Looking so delish!

I have made biscotti in the past, and now I have the incentive to try your wonderful sounding, (and healthier with the low gluten)spicy version. Good comments on the fight against evil that is ongoing in life - not just somewhere else, in another time.

And, thanks again for sending the book.

Ciao Debra. I have used baker's ammonia to make a href="http://www.pulcetta.com/2013/03/reginelle-sesame-cookies.html">reginelle. In Italy, you can find it easily in grocery stores, but here it is hard to come by. I honestly have never used it to make biscotti but now you got me curious and will try.

Ciao Claudia. Let me know if you try making the biscotti. You are welcome. I am glad you had enough time to read the book.

Love biscotti and almond biscotti are always a favourite.

Wonderful post Simona. I had to go read more on The Lebensborn Program too--it was so horribly evil it amazed me. Your biscotti looks and sounds amazing--I love the spices you worked in with the chocolate and nuts. I would love one or two with a latte right now. ;-)

Glad to read that, Ivy. Let me know if you try playing with spices.

Hi Deb. What got me really was that it had a rationale, given the premises under which the regime operated. I was pleasantly surprised by the result and now these are the standard snack at our house (my husband just had one :)