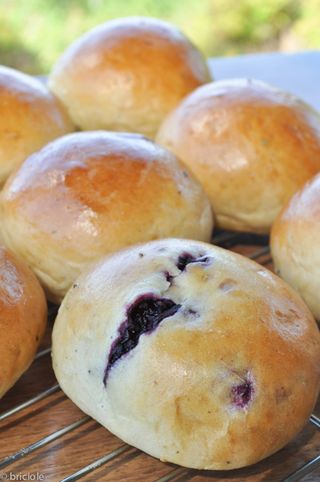 There is magic in my world to which I will never get used, like sunlight filtering through the redwoods, fog coming into the San Francisco Bay through the Golden Gate, full moon setting on the Pacific Ocean, baking bread.

Each new bread baking project I embark upon is a voyage of discovery and wonder. The occasional bump on the road is part of the itinerary.

Today's trip starts in Finland, a magic land of lakes and islands. Spending a couple of hours at the Helsinki airport to connect to a flight to the US does not really count as a visit, so Finland is one of the places in my travel bucket list. While waiting for the realization of my wish, I baked pulla, traditional Finnish buns.

The two sources I used to draw the road map for my explorations are this recipe on the Food from Finland site and this family recipe shared on The Fresh Loaf. The idea of adding mashed berries came from this recipe (also on the Food from Finland site). According to this page, "About 50 different berries are found in Finland and 37 of them are eatable." I chose blackberries, as they are plentiful now and the appreciated object of foraging expeditions. I took a number of liberties with the recipes and baked the buns my own way. Stay with me and you'll find out what happened.

The special ingredient of pulla is cardamom (cardamomo). This recipe calls for crushed cardamom and having whole cardamom seeds allowed me to comply. I crushed cardamom for pulla using an electric spice grinder (which I use regularly to turn flaxseed, semi di lino, into meal) and, the second time, a small marble mortar and pestle (mortaio e pestello). Both methods work: the first is faster, the second more meditative. Note that I used less cardamom than called for in the recipes I consulted, because I wanted a bread more subtly flavored that I could put on the table at every meal.

Addendum on cardamom: if you have cardamom pods, split them to extract the seeds, then crush the seeds. It is actually better to buy cardamom pods, as this is the form in which the spice's flavor keeps best. Note to self: follow this piece of advice next time you bake pulla. 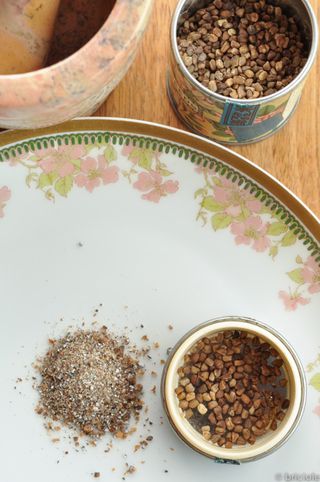 The buns are mildly sweet, but I made then just barely so by reducing the amount of sugar. As a result, the tender buns that came out of my oven were a perfect support not only for homemade plum preserve, but also for my homemade fresh chèvre and gravlax (the latter will be the subject of a post next month).

Note 1: I had some fresh whey (siero di latte) from making cheese when I made the rolls, so I used two tablespoons of it instead of the same amount of milk (and I used non-fat milk).

Note 2: I always add a certain amount of whole-wheat flour when the recipe calls only for white flour to increase the nutritional value of the bread without totally changing its nature.

Note 3: the quantity of flour you need depends on whether you use some whole-wheat flour like I did and also on the type of all-purpose flour you choose. As mentioned in previous posts, I use King Arthur Flour all-purpose flour to make all my breads (and this is a statement of fact, not an advertisement).

Pour milk into a bowl and stir into it yeast, cardamom, salt and sugar. Stir in the whole-wheat flour and the first two batches of all-purpose flour. When the flour is well incorporated, add the butter and stir it in. Stir in the third batch of flour. Empty the bowl onto your working surface and knead until you have a homogeneous the dough. Use the remaining flour to sprinkle your working surface as needed. The resulting dough is nice and soft, a bit tacky. It reminds me of challah dough.

Clean and oil the bowl and place the dough in it. Cover it tightly and let the dough rise until doubled. The time necessary depends quite a bit on the room temperature. The first time it took almost 1 1/2 hour, while the second time an hour.

Turn the dough onto the lightly floured working surface and cut it into 12 pieces each weighing 2 1/2 oz. / 70 g. I weigh the pieces to make sure they are all of about the same size.

Take a piece of dough, flatten it into a (rough) round, fold flaps towards the center (as if you were closing an envelope) all around to make a kind of parcel. Turn it so the seam is down, cup it with your hand, then move the hand in circles to make the surface of the bun tighter. Make sure the working surface is not floured, otherwise the ball of dough will slide when you try to make it go in circles.

I wish I had a video of myself shaping buns: I put it on my to-do list. In the meantime, if you need a visual aid to learn how to shape buns by rolling the dough with your hands, this post has a nice video. 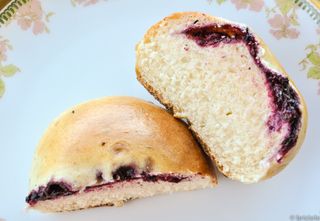 Important: if you want to make the variation with blackberries, you need to do an extra step. After flattening the dough, distribute a teaspoon of the mashed blackberries on the middle. Then, fold the dough into a tight package and roll it as described above and as shown in the video. (See below for more details on the berry buns.)

Place shaped buns evenly spaced on a silicone baking mat that fits into the half sheet pan (or a piece of parchment paper of adequate size). A half sheet pan provides enough space for the buns to expand. Since you will move the baking mat onto the (hot) baking sheet currently in the oven, I recommend you put it on another baking sheet, turned upside-down, so the transfer will be an easy slide. Cover the buns and let them rise for 15 minutes.

Brush the surface of the buns with the beaten egg. Take out of the oven the hot baking sheet, move the silicone baking mat with the buns onto it, then put in the oven.

Bake buns for 12 minutes, then check them. If not yet nice and golden, bake another minute and check again. Repeat as needed. (My buns needed 13 minutes to bake to perfection.) Take the buns out of the oven and slide them onto a rack. Let cool for at least 15 minutes before tasting them.

They were perfect, golden outside, tender inside, with the richness provided by butter and milk and the fascinatingly exotic aroma of cardamom.

Addendum (wherin I describe a bump in the road): Three of the buns in the first batch got a blackberry filling for which I followed the instructions in this post. (I was reminded of making bialys, with blackberries instead of onion and poppy seeds.) However, the oven spring of my Finnish buns was so enthusiastic that the filling turned into a sort of icing, with attendant drip on the side. The buns were perfectly good, but not visually appealing. 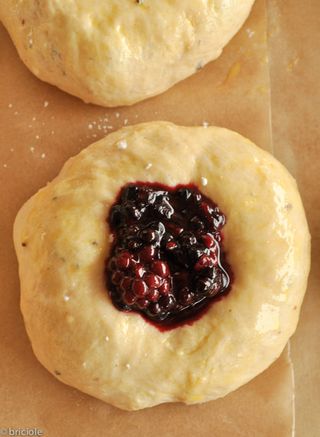 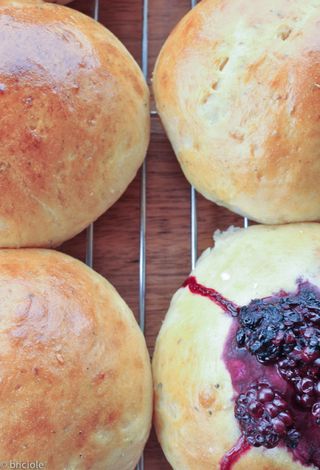 So for the next batch, I devised the process described in the recipe above, which worked much better. I was worried it would not, so I made only one specimen, portrayed in the photo above, which was promptly devoured with delight by my husband. Fortunately, it is still blackberry season, so I'll have a chance to make a few more batches and enjoy these buns that came to me as a gift from the land of lakes and islands.

1 I had failed to specify the amount of butter and added it after publishing the post. Apologies to the early readers and many thanks to Gaylyn for alerting me about the omission.

My pulla participate to the eleventh installment of the Abbecedario culinario della Comunità Europea (European Community Culinary ABC), an event organized by Trattoria MuVarA that will bring us to visit 26 countries of the EU (all except Italy) using the alphabet as guide. K like Kalakukko (Finland) is hosted by Tamara of Un pezzo della mia Maremma.

This page contains Kalakukko's recipe and the list of dishes contributed to the event.

I am sending these buns to the August edition of Panissimo, a monthly event created by Barbara of Bread & Companatico and Sandra of Indovina chi viene a cena? and hosted this month by Barbara.

And, via Barbara, to the monthly showcase Sourdough and Yeast by Wisla (in Polish). You can see the roundup in this post.

Finally, I am sending my pulla to Yeastspotting.

This post contains the second part of the roundup and links to the other two parts.

I would love to have a bun filled with blackberries right now for breakfast!

I am sure it would be great with some of your jams, Ivy.

Dear Gaylyn, thank you so much for alerting me about the omission. I have updated the recipe (both on the post and on the print-friendly page. I hope you try baking pulla. A few days ago, I took out of the freezer some that I had frozen and was reminded how good they are.

Thank you so much! I got your email also. I've already used my starter today, but next feeding, this is exactly what I want to make. I've got so many berries right now...that I, too, am freezing them for future use (in vacuum bags). This would be just perfect!

P.S. If you have an ice cream maker, may I also suggest making blackberry sorbet?