[cliccare il link per andare alla versione in italiano] green goodness With a name as sensuous as caldo verde (literally, green broth), a soup's future is secure. Who doesn't want to eat some caldo verde? I certainly wanted to, but there was a little glitch: I don't eat sausages, I stopped eating them years ago, for various reasons. I have nothing against chouriço or linguiça, which are called for in the recipe for caldo verde, a traditional Portuguese soup, often referred to as Portuguese kale soup. And I don't like to eat "imitation" something, so I set about making a soup... Read more →

Many thanks to all who illuminated my week by contributing their images to edition #72 of Black and White Wednesday - A Culinary Photography Event. And a big thank you to Susan of The Well-Seasoned Cook who created the event and to Cinzia of Cindystar who is now organizing it. Enjoy this week's show! Shri of TiffinCarrier Antic/que's: Green Peas Kachori Meena of Encourage Spice: A Busy Day in my Kitchen Paz of The Cooking Adventures of Chef Paz: Four Chickens and a Pig Cinzia of Cindystar: Tuscan Kale Ribollita Shruthi of Food & Clicks: Kheema Biryani Princy of Reflections: Hot... Read more → [cliccare il link per andare alla versione in italiano] pretty in monochrome Le fate esistono. Fairies exist. Here is how I know. Last October, shortly before going to Italy to visit my family, I learned about a special flour from Puglia (Apulia) called farina di grano arso (literally, burnt wheat flour). This flour was traditionally obtained by milling durum wheat grains gleaned from the fields after the stubble had been burnt. I had of course known about the gleaning that happened after harvesting, but never about combing through the burnt fields, a back-breaking job yielding burnt berries. However, in a situation... Read more → 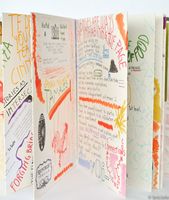 spontaneous deconstructed journal I usually start my announcement of a new edition of Novel Food by sharing the title of the book I am currently reading. This time, instead, I am showing you a book I just made. In January, I attended a nice workshop taught by artist Jill Berry where I learned to make a Spontaneous Deconstructed Journal. When I left for Austin to attend the LongHouse Food Revival, I carried in my bag a set of pages and various writing and drawing tools. I wrote and drew and marked the pages while I was in Austin and also collected... Read more →

special Carnival beads for LongHouse Austin After showing you one of the tables we set, here are two more images from LongHouse Food Revival Austin. At the entrance, people could pick up a strand of appropriately themed Carnival beads. "step away from the takeout menu" Kate of The Hip Girl's Guide to Homemaking set up this nice table with copies of her book. Don't you love the apron? If you are curious to see more about the event than the details I shared, on this page there is a nice slide show of images by Jo Ann Santangelo. This week, I... Read more →

potatoes dressed in red I crave color these days, even though the weather has been mostly bright and sunny. A batch of my roasted red pepper and almond dip, made last summer and frozen, brightened me for a few days. I was about to thaw another one, when, in the freezer, I found a container of roasted Round of Hungary peppers, also from last summer. Round of Hungary (or pimento) peppers I thawed them and used them to make half a batch of the roasted red pepper and almond dip substituting almonds (mandorle) with cashews (anacardi). I like the result: I... Read more →

[cliccare il link per andare alla versione in italiano] would you like a slice? Ever since I could read, I have known about Bratislava, the capital of Slovakia, because it is one of the twin cities of Perugia, my home town. But I have never been in that part of Europe, so Bratislava is still a name and a dot on the map. Recently, I heard on the radio a report on Košice, the capital of East Slovakia, which is the 2013 European Capital of Culture. Hopefully during the year that city and its cultural heritage will become better known to... Read more →

A little (edible) math: a new version of a pretty pasta shape + a beloved dip repurposed as pasta sauce = a cheerful plate of pasta Besides exploring new pasta shapes, I like creating variations of known ones. Today's pasta is an example. I took the pasta dough made with 50% farina di castagne (chestnut flour) previously used in making a version of strascinati and I tried making gnocchetti sardi (Sardinian gnocchi) with it. That worked very nicely. I then took some roasted red pepper and almond dip (made last summer and frozen), and repurposed it as pasta sauce. The result?... Read more →

you start with a square of dough I made a lot of garganelli to test various alternatives in preparation for my post on this lovely pasta shape. Here are two images I particularly like from those I took while merrily rolling squares of pasta dough into garganelli. and you end up with a lovely garganello I was away for a few days, but I am back home now, ready to work on a new chapter of my pasta adventures. In the meantime, enjoy a plate of garganelli. This is my contribution to edition #70 of Black and White Wednesday - A... Read more →

[cliccare il link per andare alla versione in italiano] heatlhy breakfast beverage "Everything tastes better with applesauce" has been a tenet of our household ever since I started making roasted applesauce. It is easy to make, healthy, and has an intense apple flavor undisturbed by extraneous ingredients. Just to give a couple of examples, I have used it to dress gnocchi di ricotta, to accompany French toast, and, of course, simply spread on bread. I've been making kefir at home for 13 months now. I use it in various ways, in particular to prepare lassi for my husband's breakfast (colazione): strawberry... Read more →