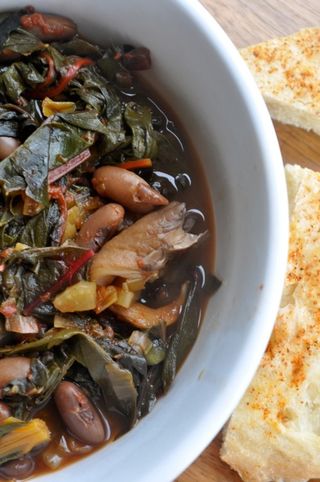 For the current edition of Cook the Books, we are reading Heartburn by Nora Ephron (1983). I had heard about the book, so I was glad to see it on the Club's list. The writing is witty and engaging, and as a reader, you really want to know how the story will unfold. It was easy to go from cover to cover, chuckling here and there, and cheering at the final scene, when a lime pie is sacrified on the altar of justice.

While I don't want to diminish in any way the importance of the book from a sociological perspective (it was published almost 30 years ago), as a reader, I was not left wanting for more. The shallowness of the characters makes them forgettable.

One aspect of the novel that I liked a lot is the way the recipes are woven into the text, part of the narrative of the protagonist, Rachel Samstat, who is a successful cookbook author. I wasn't particularly inspired to try any of the the recipes, though. In reading the story, I was more focused on thinking: what would I do if something like that happened to me? "That" means discovering that your husband is in love and having an affair with a woman you know, while you are pregnant with your second child and the first one is a toddler.

When I am upset, cooking in and of itself is helpful, in that it makes me focus on something other than whatever it is that is causing an emotional tornado. And I tend to cook dishes that are comforting to me, something hot and with lots of vegetables, often a soup. The recipe I am presenting here is a classic example. I had made it a few months ago once and even took a photo (see below), but forgot to write down the details. I really liked it, so I went back to it. 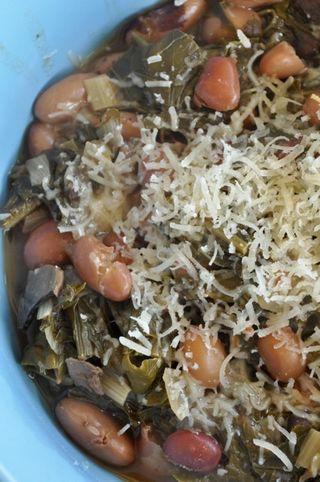 The inspiration for my zimino di fagioli came from a recipe called zimino di ceci that I read on the Accademia Italiana della Cucina site. The dish is traditional in Liguria and it is made with chickpeas (ceci). This version of the recipe by Clifford Wright includes an explanation of the name of the soup, which is sometimes called ceci in zimino. 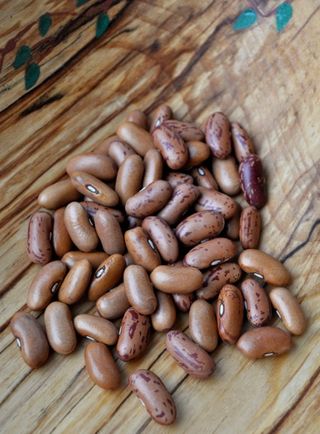 I like chickpeas, but I prefer to use beans (fagioli), because I have access to a variety of great organic beans of local production, like the speckled bayo on the photo, which are very good in soups.

The original recipe uses dried mushrooms (funghi secchi) and that's what I used the first time I made the dish. However, I am not a big fan of dried mushrooms, so when I took up the recipe again, I decided to use a mix of fresh mushrooms, including some locally grown oyster mushrooms. The photo below shows the mushrooms on their growing medium. 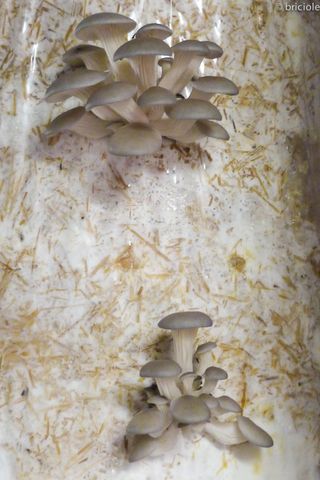 I recently signed up for a special winter CSA share. I will tell you more about this soon. For now, suffice to say that I have access to some gorgeous rainbow chard (bietola). In the balance of ingredients, with respect to the original recipe, I chose to give much more prominence to the chard and a bit more to the mushrooms. 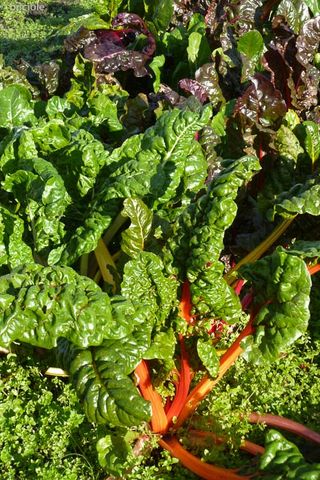 it doesn't get any fresher than this

How to cook dry beans
The way I cook beans for further use comes from Vegetarian Cooking for Everyone by Deborah Madison (Beans with Aromatics). After soaking half a cup of dry beans for several hours or overnight in enough water to cover them by about an inch (I use two cups), empty the whole bowl into a saucepan and add

Bring the water to a lively boil quickly, and keep it there for five minutes, then turn down the heat and let the beans simmer, covered, until they are ready. How long this takes depends on the type of beans and their freshness. Let them cool in their broth, then remove the aromatics and discard them. Let the beans rest in their cooking broth until ready to use.

How to cook the soup
Warm a bit of olive oil in another saucepan, then add shallot, leek and celery and stir well. Cook for a few minutes, then add the garlic.

After a couple more minutes, when the garlic smells fragrant, add the mushrooms and stir. Turn up the heat a bit. When the mushrooms start releasing water, stir well for a minute, then add the tomatoes and stir well.

Bring to a simmer, then add the beans, drained, and stir. Add the chard leaves, cut into ribbons 1/2-inch (1.25 cm) wide and stir. It is fine if the chard leaves have water clinging to them. Cook for 10 minutes, or until the chard is nice and tender, adding some or all of the bean cooking liquid to make a (rather dense) soup or, if you prefer, some water or vegetable broth.

I am not sure Rachel Samstat would like my zimino di fagioli, since it is something quite different from the dishes she describes in the book. On the other hand, considering how much misery living in her "set" has caused, maybe she ought to consider a change of scenery and a change of cuisine.

This is my contribution to the current edition of Cook the Books, hosted by Simona of briciole (that would be me). You can find the guidelines for participating in the event here, and here is the announcement. This post contains the roundup of the event.

I am also submitting this to My Legume Love Affair 53, the current edition of the popular, legume-centered event created by Susan, The Well-Seasoned Cook, and hosted this month by Simona of briciole (that would be me — again). This post contains the roundup of the event.

I love your recipes. They're always so inspiring.
I just started a new blog party called Pantry Party. I hope you join us with some of these great recipes! http://lawstudentscookbook.wordpress.com/2012/11/27/introducing-pantry-party/

che voglia di questa zuppa ora!
the first snow has fallen and cold as I still feel in my bones after walking for more than a hour in the cold (we do not own a car, we are true Stockholmers) this is exactly what I would like and I will try to gather the ingredients to make it soon. next time maybe I will participate to this initiative too. the book sounds like fun and very girly :)
beautiful the picture of the mushrooms, would never ever have guessed they grow them that way!

Sounds delicious! All the tastes of Autumn in one bowl...

Thanks, Elizabeth, for the invitation. I will try to join the party this month.

Barbara, I admire you: I would not survive a winter in Stockholm. The next book in our list is The Hunger Games. It was a very enlightening experience to visit the mushroom farm.

That chard does look fresh and beautiful! I have a lot in the garden now so I am going to check this recipe out!

Such a beautiful soup Simona with the mushrooms and that chard. Great review of the book too. I had a hard time relating to and really liking the characters so I get what you mean.

Especially thank you for jumping in and taking on the hosting duties for this book--and doing it so well. It is great to have you as part of the CTB hosting team. ;-)

Hi Debra. Indeed, that chard is quite luscious. It's a pleasure to cook with it. I hope you try to make the zimino with your chard.

You are more than welcome on all fronts, Deb.

I would certainly be comforted by this soup, especially with the generous grating of cheese on top. I am a great fan of chard, too.

That shot of the oyster mushrooms is a beauty, Simona.

Thanks, Susan. Photographing the mushrooms was a bit of a challenge, because of the light. I'll be harvesting rainbow chard for another couple of weeks. I have been making all sorts of nourishing dishes with it.