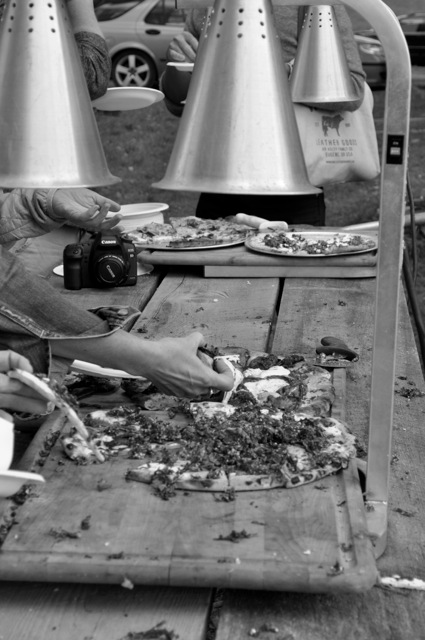 reaching for a slice

More precisely, where have I been? In a previous post I hinted at a visit elsewhere and here's a bit more about it. On September 15, I attended the first LongHouse Food Writers' Revival:

Based on the 19th century American Chautauqua movement, LongHouse Food Writers Revivals are a series of annual gatherings of thought leaders across the United States. The Revivals are designed to stretch the boundaries of how food stories are told, raise the bar on the nation’s food news agenda and, most of all, foster the community between generations, regions, cultures and media platforms that support innovative work of the highest quality.

A report of the events of the day in the words of Molly O'Neill, the person behind the vision, is in this post (which also includes a slide show).

The photos in this post are from lunch time, when pizza was served to the Revival's participants. The beautiful pizza oven in the photo traveled on a trailer to reach LongHouse. 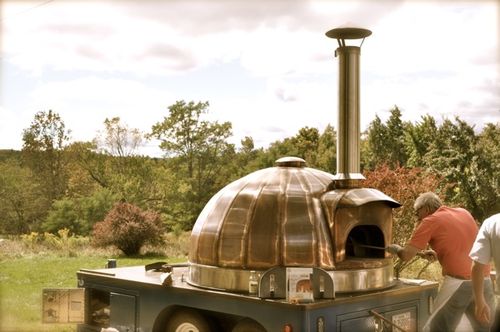 more pizza is on the way

Update: A post related to the photos above was just published on the LongHouse blog. Here's a bit of the intro:

Albie Barden... hauled the magnificent copper-doomed wood-fired oven that he helped build from his home in Skowhegan, Maine, to LongHouse Food Writers Revival.

He intended to demonstrate the efficacy and efficiency of the oven... But the gathering also carried Mr. Barden back through his own path of making-a-living, while making-a-difference, while making-art.

In a letter to LongHouse he issues a battle cry: “Put your hand in the fire!”

In case you are wondering, we also had dinner at LongHouse, but that is a story for another post.

This is my contribution to edition #53 of Black and White Wednesday - A Culinary Photography Event created by Susan of The Well-Seasoned Cook and from this week onward organized by Cinzia of Cindystar, who is also hosting.

The two top photos were shot in color and then converted to black and white.

This post contains the gallery of images submitted to the event.

oh that pizza oven is beautiful!!! what i would do for one of those, haha!

Hi Angela. That oven certainly had a lot of people dreaming, myself included.

What a wonderful event. Oh, I want one of those pizza ovens as well!!!

What a lovely event you attended and the pizza oven looks amazing! Thanks for sharing!

Ciao Ivy. Every time I look at these photos, a dreamy expression comes over my face.

Hi Lynne. It was a real treat.

Simona, this retreat looks like it was a very special time for everyone.

It was, indeed, Molly. Both you and I had an inspiring experience last month.