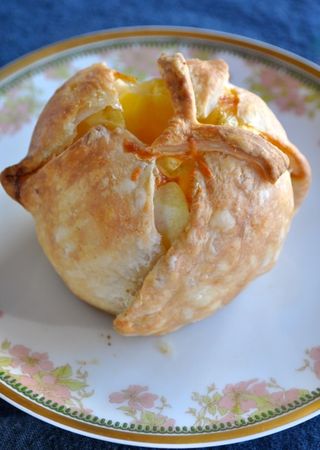 not the typical apple baked in puff pastry

Well-demarcated in both time and space, the novel Going to Solace by Amanda McTigue is expansive in the varied cast of characters and rich array of themes it presents:

It's Thanksgiving week, 1989. We're in Big Piney and Little Piney, two hollows near the town of Garnet in the Blue Ridge Mountains. A handful of mismatched folks - some country people, some far-flung, fancy people - discover they have one thing in common: someone they know is sick, real sick, dying sick. Their paths cross at a local hospice called Solace. Suddenly, they're caregivers, bedside improvisers, doing all they can to beat back death or "hurry him on about his business." (source)

Ms. McTigue shows us that if you take a sliver of time of a sliver of space, you'll find a universe that resonates with us, regardless of whether we are dealing with someone who is sick. She follows the characters as they deal with the task of accepting the various elements of their lives (who they are, where they are, etc.), and move forward.

The character that got most of my attention is Maggie Dull (now calling herself Dulé). Maggie flies from Palo Alto to her hometown to be with her mother, who has written "I do not want to see my children." I finished reading the book as I was visiting my hometown (Perugia) and staying with my family in the apartment where I lived for 15 years before moving to Milan. Differently from Maggie, I go back regularly. This time, something special happened: I attended a high school reunion, a dinner at which I met some people I had not seen since we graduated. It was a truly special evening and one that I hope will be repeated the next time I visit.

My background as a nurse and my professional experience with people nearing the end of their life also provided a special perspective to the reading. As the novel is set during Thanksgiving week, the traditional dinner and the foods served during it are part of the story. The novel inspired me to bake a special treat, connected to the season and to my youth.

During my training as a nurse, I spent a three-month rotation in the department of the Perugia hospital that used to be the sanatorium. The old building, with big windows and a balcony originally used as a sun deck, was located in the middle of a large garden. I remember in particular the many persimmon trees loaded with fruit this time of the year. The tradition of nourishing food that was part of TB treatment was carried on in the kitchen, though the patient population had changed.

In the morning, we would ask the patients whether they wanted baked apples for lunch and/or dinner. The other nurse student and I then went into the kitchen to bring the order. Of course, we could have called on the phone, but we both liked to take a little break and visit the welcoming kitchen. The cook in charge always gave us something special for our breakfast. The kitchen at Solace and its cook, Miss Cherille, reminded me of it. The apples were baked whole, unpeeled, with just a light dusting of sugar on top. From the pan carrying them emanated a sweet smell with a hint of tartness. The apples sat in a shallow pool of juice, unadorned yet proud of their deeply flavored simplicity. 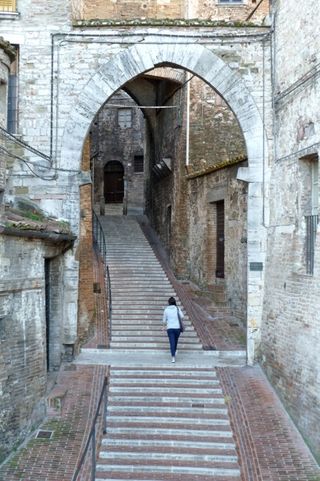 View of part of my daily walk to high school

When I was in high school, I sometimes treated myself to a sumptuous mid-morning snack, which I purchased from a bakery located not far from the school (in downtown Perugia): mela al cartoccio, an apple peeled, cored and stuffed with raisins (uvetta) enclosed in crisp puff pastry (pasta sfoglia). I could never eat the whole apple: I would bring home half of it and eat it in the afternoon or for dinner. My deskmate liked it too, a fact I remembered when I saw her at the dinner after seeing mele al cartoccio in the window of the bakery. Time has not stood still, and yet it seemed that for a split moment, I could reach back to that past and get an apple like I used to.

I came back to my Californian kitchen determined to bake a mela al cartoccio as a special, early act of giving thanks. But no sooner had I decided to bake a mela al cartoccio that the idea came to my mind to stuff the apple cavity with cheese instead of raisins. Combining apples and cheese in a baked good is not a new thing for me: last year I made a crostata di mele, burro di mele e formaggio Cheshire (apple, apple butter and Cheshire cheese tart).

With apples from the new crop now available, this is the time to try this recipe. Just one piece of advice: get yourself an apple corer. It's really worth the expense. I tried doing without it, but it's tricky: the apple corer makes the operation quick and precise. 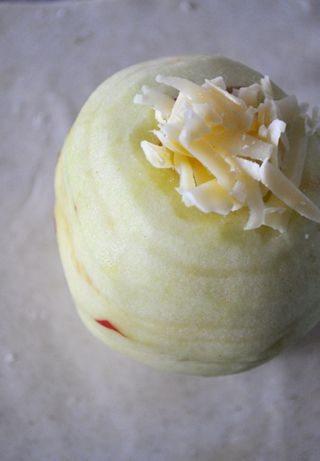 stuffed and about to get dressed

Ingredients for one apple (to be multiplied as needed):

Peel and core the apple. You may or may not want to use a vegetable peeler for the first task, but you want to use an apple corer for the second (trust me). Stuff the apple cavity with the cheese.

Roll the puff pastry into a thin square. Place the apple in the center of the pastry square and wrap it, pinching the seams. Where you see that there is extra puff pastry, you may want to cut a wedge and use it to seal the top or to make a decoration. I skipped the egg wash, but you don't have to: in a small bowl, beat an egg lightly with a tablespoon of water, then brush the surface with the egg wash.

Place the apple on a baking sheet lined with a silicone baking mat and put the baking sheet in the oven. Bake for 35-40 minutes, until the surface is golden. Serve with fanfare (it's justified). When you cut the apple, the smell of melted cheddar and baked apple is irresistible. 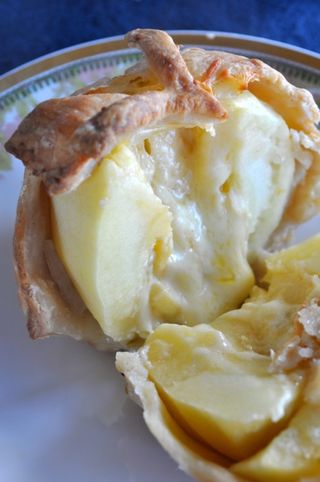 Everything that ends marks the beginning of something new. This applies to us as well as to the characters of Going to Solace. That such beginnings occur on Thanksgiving is quite fitting.

This is my second contribution to the 17th edition of Novel Food, the literary/culinary event that Lisa of Champaign Taste and I started some time ago and that I continue to host.

FTC disclosure: I have received a copy of the book mentioned in this post from the publisher. I have not and will not receive any monetary compensation for discussing the book on my blog. The opinions expressed are entirely my own.

THe way the cheese is oozing through the middle there looks so appetising! What an interesting-sounding book.

Simona, I'm so thrilled that GOING TO SOLACE inspired your incredible apple creation. My husband took one look at the pictures above and put in his order (demand!) for a taste of the real thing. Please let me know if you'd like to offer one of your readers a copy of the novel and let's make that happen. I'd love to see what other concoctions arise from a book whose characters must improvise Thanksgiving both around and beyond the dining room table. Cheers.

This is an interesting take on oven baked apples.
I can already feel my inspiration flowing and building further on your idea... what about, instead of adding cheese, adding vanilla pudding... or maybe some biscoff spread and top it off with almonds or ... *ideas flowing*
Oh I know I'll be making something alike soon, very soon! *must bookmark page now in order to not forget*

Wonderful review and delicious-looking fanfare. It is nice that you're able to return home, occassionally. Your reunion must have been fun, to see all friends. You mean you had to climb ALL THOSE steps on your way to school!? Every day? Every week? Every month?

Simona, I loved what you wrote, and many things about this post. The photo of the beautiful arch in Perugia where you walked to school, and your fine writing. The apples "unadorned, yet proud of their deeply flavored simplicty." Perhaps there is a novel in you waiting to be written?

Hi Alicia. And the smell is lovely. For a cheese-lover, this is a nice treat. And the book really engaging.

Thanks for your kind words Amanda and for your kind offer: we'll definitely make it happen. Not having Thanksgiving traditions to deal with, I am free to interpret the holiday the way I like, and the overall theme of giving thanks is quite inspiring.

Hi Sarah, I am glad to read that my little recipe got your creative juices flowing. The best answer to "what if?" questions is to follow your ideas and see what happens. I hope you'll do it :)

To tell you the truth, Paz, that's not the whole flight of stairs. Downtown Perugia is at the top of the hill so to get there it's either stairs (and there are a few more in various parts of the city) or steep streets. The answer is yes, I've walked on that street every day to go to school: I love that road.

Thank you so much, Molly, for your kind words. My only foray into fiction (short story) has clarified to me that it is not my forte, but I hope that my food writing keeps improving. I love simplicity. Now that you've been to Assisi, you understand where I come from. St. Francis is an inspiration even in areas not directly connected to him.