[cliccare il link per andare alla versione in italiano] a view of Warren Creek Farms pumpkin patch The best part of Halloween is going to the pumpkin patch to choose pumpkins (zucche), some for carving and some for cooking. A visit to Warren Creek Farms during the month of October entails also a visit to their corn maze, which has a different design every year. The fact that I am writing this post indicates that we made it out of the maze safe and sound (thanks to my husband's orienteering skills; I am hopeless at finding my way). pumpkin patch shopping... Read more → 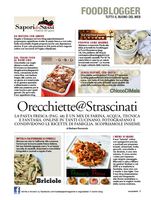 from the November issue of the Italian magazine Sale&Pepe Good news: briciole is one of the blogs featured on the Foodblogger page of the November issue of the esteemed Italian food magazine Sale&Pepe (which earlier this year celebrated 25 years of publication). The issue includes an article (with recipes) dedicated to handmade pasta from Apulia, hence the choice of bloggers passionate about fresh pasta. And speaking of pasta, a reminder that this week I am hosting Presto Pasta Nigths. I am preparing a post on another adventure in fresh pasta making. Stay tuned! Read more →

every farmers' market shopper needs a basket The basket I use to carry my farmers' market purchases came from this shop, courtesy of my husband. The shop is located on the Arcata Plaza, where the market is held every Saturday from mid-April to the week before Thanksgiving. Do you have a shopping basket? This is my contribution to edition #56 of Black and White Wednesday - A Culinary Photography Event created by Susan of The Well-Seasoned Cook, now organized by Cinzia of Cindystar, and hosted this week by Lail of With a Spin. The photo was shot in color and then... Read more →

This week, I have once again the honor of hosting Presto Pasta Night, edition #288 to be precise. Pasta comes in a myriad shapes. This past summer, I started a journey into pasta shapes from southern Italy made by hand using an eggless dough: strascinati, orecchiette, maccheroni al ferro, gnocchetti sardi, and fusilli al ferro. I am having so much fun that I am planning to continue teaching my hands to make new tricks. Week after week, Presto Pasta Nights captures snapshots of the countless realizations of pasta dishes by food bloggers around the world. Important note: Ruth of Once Upon... Read more →

Welcome to the roundup of the 17th edition of Novel Food, the literary/culinary event that Lisa of Champaign Taste and I created in 2007 and that I continue to host. Novel Food is about literary works (prose or poetry) that inspire the preparation of dishes. Like all its predecessors, the current edition of the event includes a lovely set of readables and edibles. Please, follow me on a short literary/culinary tour. For each contribution, I will offer a small bite to whet your appetite for more: follow the link to read the details of the inspiring work of literature and of... Read more →

When photographing, we try to capture light, to tell a story using light. The stories below are connected to food, so they speak a universal language. Many thanks to all who illuminated my week by contributing their images to edition #55 of Black and White Wednesday - A Culinary Photography Event. And a big thank you to Susan of The Well-Seasoned Cook who created the event and to Cinzia of Cindystar who is now organizing it. Enjoy the show! Shruthi of Food & Clicks: Cooking with 3 Sisters Naughty eggs Making Goudulla Miram (Spicy Egg Fry) Garlic Cinzia of Cindystar: Crocheted... Read more →

[cliccare il link per andare alla versione in italiano] not the typical apple baked in puff pastry Well-demarcated in both time and space, the novel Going to Solace by Amanda McTigue is expansive in the varied cast of characters and rich array of themes it presents: It's Thanksgiving week, 1989. We're in Big Piney and Little Piney, two hollows near the town of Garnet in the Blue Ridge Mountains. A handful of mismatched folks - some country people, some far-flung, fancy people - discover they have one thing in common: someone they know is sick, real sick, dying sick. Their paths... Read more →

[cliccare il link per andare alla versione in italiano] the original dish (i.e., sans avocado) Our tour of the 20 regions of Italy organized by Trattoria MuVarA brings us to Marche, a region neighboring my native Umbria. I know Marche a bit because, besides being close to where I grew up, it also offers the closest beach spots, along the Adriatic coast, so I spent vacation time in places like Torrette di Fano, Senigallia and Pesaro. A view of Urbino dominated by the Palazzo Ducale Urbino, one of my favorite Italian cities, was chosen to represent the region. It's an architectural... Read more →

Three years ago, I read my first Pepe Carvalho novel, Tattoo. It inspired me to make caldeirada (traditional Portuguese fish stew), as recounted in this post. I arrived at Manuel Vázquez Montalbán (1939-2003), Carvalho's creator, through the Montalbano novels. The connection between Montalbano and Montalbán is not an accidental one: as mentioned in the post, Andrea Camilleri, Montalbano's creator, named his character after Montalbán in gratitude, and the two authors knew each other. After Tattoo, I read The Angst-Ridden Executive and Southern Seas (1979). Private detective Pepe Carvalho is an interesting character, at times difficult to fathom, which is part of... Read more →

"a me non piace il cioccolato" / "I don't like chocolate"

I can't believe you're saying that, Pinocchio! I just got back from a visit to my hometown of Perugia. One afternoon, as I was looking at Pinocchio in the window of Chocostore, I noticed Palazzo dei Priori reflected on the glass. The beautiful Gothic portal provides access to the Sala dei Notari. The two bronze statues represent the lion and the griffin, symbols of the city. Interestingly enough, the homepage of Eurochocolate, the chocolate festival held every year in Perugia in October, shows the same portal, though from a different perspective. Differently from Pinocchio, I ♥ chocolate. This week, I have... Read more →