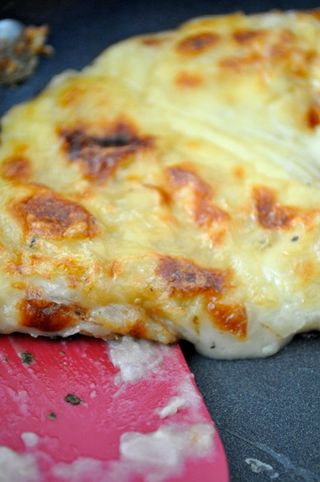 Three years ago, I read my first Pepe Carvalho novel, Tattoo. It inspired me to make caldeirada (traditional Portuguese fish stew), as recounted in this post. I arrived at Manuel Vázquez Montalbán (1939-2003), Carvalho's creator, through the Montalbano novels. The connection between Montalbano and Montalbán is not an accidental one: as mentioned in the post, Andrea Camilleri, Montalbano's creator, named his character after Montalbán in gratitude, and the two authors knew each other.

After Tattoo, I read The Angst-Ridden Executive and Southern Seas (1979). Private detective Pepe Carvalho is an interesting character, at times difficult to fathom, which is part of his appeal. He has a strange relationship with the people who are closer to him. There is Biscuter, his sort-of receptionist, who lives in his office and cooks meals that Carvalho not always can enjoy, but for which he is very grateful.

'Do you realize, Biscuter – we private eyes are the barometers of established morality. I tell you, this society is rotten. It doesn't believe in anything.'
'Yes, boss.'
Biscuter backed Carvalho up, not only because he guessed that the boss was drunk, but also because he could recognize a catastrophe when  he saw one.

Then, there is Charo, his sort-of girlfriend, who is also a prostitute with a high-class clientele. Carvalho appears to care about those two people, but at the same time, he does not seem close to them. In Southern Seas, he also cares about Bleda, the puppy he purchases on a whim after seeing her in the window of a pet shop.

Carvalho is subject to dark moods. It is not easy to predict how he will react to what happens to him. He may not like the person who hires him or his/her motives, but he does the job he is paid to do, then lets the hiring party deal with the results.

In Southern Seas, Carvalho is hired by the widow of Carlos Stuart Pedrell, a Barcelona businessman, construction magnate, and arts' patron. Stuart Pedrell disappeared not long after announcing plans to travel to the South Pacific, then, a year later, he is found stabbed to death at a construction site in Barcelona. His wife asks Carvalho to find out what happened. The detective reconstructs Stuart Pedrell's existential and physical journey. In the process, he meets an interesting array of characters, from Stuart Pedrell's cocaine-addicted daughter, to his power-addicted business partners (one of them fitness-obsessed, the other an epicure), to his lovers, and travels from the opulence of Stuart Pedrell's residence to the squalor of the apartment where he lived incognito until the violent end. The journey allows the novel's author to offer a composite view of the vibrant Mediterranean city and the people who inhabit it.

Barcelona and food and wine are co-protagonists of this and the other Carvalho novels I have read so far. The detective loves to eat and drink and, as recounted in more details in the previous post, he can cook. He knows his city, walks around it, and describes it in crisp sentences, like this one, where he refers to Franco's dictatorship, which ended only four years prior to the novel's publication, and during which Vázquez Montalbán spent time in prison:

Artimbau's studio was on Calle Baja de San Pedro. As usual, Carvalho felt a flicker of nervousness as he passed the police headquarters in Vía Layetana. He had only bad memories of the barracks-like building. However much they tried to give it a democratic face-lift, for him it would always be a grim fortress of repression.

Artimbau is a painter whom Stuart Pedrell had patronized and he is also a former political associate of Carvalho. The detective visits the artist in his studio and, upon being invited to eat, finds out that Artimbau is on a diet:

Carvalho lifted the lid and was assailed by the aroma of a strange, potato-less stew in which vegetables vied with meat.
'I have to watch my weight, so I don't put in potatoes, And hardly any fat either. But it tastes OK.'

Over stew and plenty of wine, Artimbau tells Carvalho about Stuart Pedrell's rise to power and about the rich man's relationship with the artists he sponsored, which helps Carvalho in his efforts to construct for himself an image of the murdered man.

I read this passage of the book at a time when I was harvesting potatoes I had planted in my little vegetable patch. I love digging potatoes: it's a kind of treasure hunt that ends with something truly valuable. (I have featured my potatoes in the recent post on jota / bean, sauerkraut and potato soup.) I imagined that Carvalho, allergic as he is to any kind of limitation placed upon food and drink, would leave Artimbau's studio with a craving for potatoes, so I prepared something to satisfy such craving: my rendition of frico, a traditional dish from Friuli (the region from which jota also hails) .

There are various types of frico, defined by the ingredients used. The basic frico is a crisp cheese fritter. The one I made contains potatoes and also some onion (cipolla). Among the many recipes I looked at, the one that I used to guide me is on this page (in Italian). I did not use pancetta and in terms of cheese, I used half Montasio and half Crescenza, both made by me. 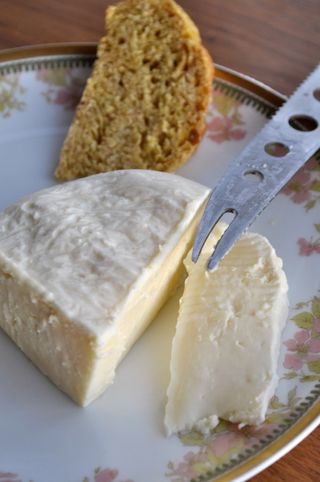 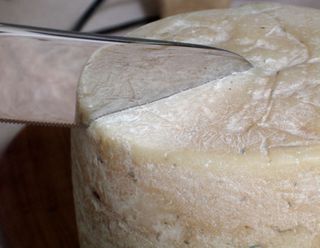 Warm up some olive oil in a pan, add the onion, stir well and cook for a few minutes. Add the grated potatoes and 1/4 cup of water. Stir, cover, and cook until onion and potatoes are soft. Check the pan often and, if it becomes dry, add some hot water to it.When the potatoes are ready, add the cheese and salt and pepper to taste, then stir to incorporate. Transfer to a warm 8 inch / 20 com non-stick frying pan and flatten into a sort of pancake. Cook the frico on both sides until golden. Use a plate or a rimless lid to flip the frico. When ready, cut into portions and serve immediately.

What about Carvalho and his search for Stuart Pedrell's murder? Southern Seas being a mystery, I don't want to divulge more than necessary to whet your appetite. If you enjoy complex characters that move in a fascinating environment and masterly woven plots, then Manuel Vázquez Montalbán is your type of writer and you may want to pick up one of the Carvalho novels available in English translation (see this page). They are satisfying books, just as frico is a satisfying dish.

This is my contribution to the 17th edition of Novel Food, the literary/culinary event that Lisa of Champaign Taste and I started some time ago and that I continue to host.

FTC disclosure: I have received a free review copy of the book mentioned in this post from the publisher. I have not and will not receive any monetary compensation for discussing the book on my blog. The opinions expressed are entirely my own.

That looks delicious (and the book sounds intriguing!) - like a frittata bound with cheese instead of eggs! Which sounds like a wonderful idea to me.

I love detective stories, especially when there's food involved! A beautiful review of Southern Seas and Carvalho a very interesting character! Of course, your potato dish looks amazing, as usual!

I love both - the potatoes and the book. I need a good mystery... so many are disappointing.

these looks sooo good! would make an amazing Sunday brunch or a cozy dinner. your cheeses are mouth watering and I can't wait to learn this amazing skill of yours so I can savor them at home. really interesting back-story too.

Ciao Alicia. I've really enjoyed the Carvalho novels I have read so far: they are a nice mix of mystery and political and social commentary and offer an interesting view of one of the great Mediterranean cities. Frico is quite special, indeed.

Thanks, Lynne. If you like detective stories, I recommend you give Vázquez Montalbán a try (and Andrea Camilleri too).

Hi Katie. Southern Seas is certainly an intriguing mystery and the characters, from Carvalho on, are all interesting.

Ciao Barbara. I agree: Sunday brunch or a cozy dinner. I am so excited you are getting into cheese making :)

I enjoyed "Southern Seas" very much. Now, I'd love to enjoy your frico.

Wow, you make your own cheeses? Color me impressed!

I've never read (or, to be honest, heard of) Pepe Carvalho, but I've been hunting around lately for some good reading material. Thanks for the tip, he sounds like a fascinating writer.

I am glad you did, Paz (I know, the last two pages were hard: for me too). I have run out of Montasio, so that's next on my list of cheeses to make. I need a longer day to get everything done!

Thanks, Frank! If you enjoy a good mystery, one of the Pepe Carvalho novels or one of the Montalbano novels are what I'd suggest. Both series have nice views on local foods.

Okay, how cool that you and Paz took different approaches to the same book, thus giving all of us a bigger taste of it?! And both of you have done potato dishes, which I love and will have to try soon. Do you have any tips on what other types of cheeses to include?

We actually knew we were reading the same book, but did not exchange information on the dish, so indeed, it is interesting that we both went for potatoes, from different directions. As for cheeses, you may be able to find some Montasio in a well-stocked cheese shop, but I am not sure about Crescenza (it may be called Stracchino). Instead of Montasio, you may try some Asiago. Crescenza is a bit trickier to substitute: I'd probably choose some Fontina. Let me know what kind of cheeses you can find and I can adjust my advice based on that information.