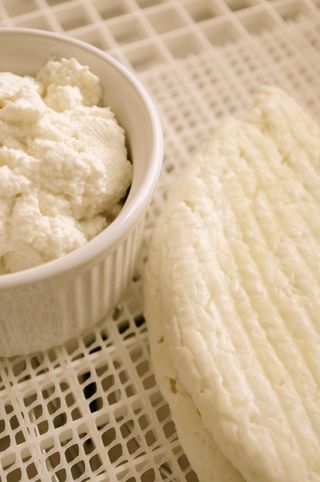 Halloumi and Anari from its leftover whey

Halloumi is from the island of Cyprus and is characterized as a semi-hard, unripened, and brined cheese made traditionally from mostly sheep's milk with the addition of a smaller amount of goat's milk. Modern Halloumi is made from a mix of goat's and sheep's milk, and sometimes cow's milk is added.

Thus Jim Wallace introduces this wonderful cheese on the page dedicated to his recipe for making Halloumi at home. Every month, Jim contributes a cheese recipe to the Moosletter, the New England Cheesemaking Supply Company newsletter and I look forward to receiving it to see what Jim has been experimenting with in his cheese lab, which I know well, having attended two workshops there.

The recipe for Halloumi comes with all the details you need to replicate it and plenty of photographs to illustrate the various steps. I won't repeat anything here, but rather share notes about my experience and a few images from my kitchen.

Two bloggers I have been following for years, Ivy of Kopiaste and Peter of Kalofagas, first introduced me to Halloumi. Ivy has also written a post describing the making of it. I actually had made Halloumi once, a couple of years ago, using the recipe from one of my books, but I was not particularly excited about the result, though the cheese was quickly consumed. The part that was hardest to handle was having to keep the cheese in the brine, because the jar with it occupied a lot of space in the fridge. So, I was happy to see that Jim's recipe offers a way of making the cheese without the brine bath.

The first time I made Halloumi using Jim's recipe, I used all cow's milk, while for all the subsequent renditions (and there have been several so far), I used half fresh goat's milk (latte di capra) and half cow's milk (latte di mucca). Of course, I wish I could use sheep's milk (latte di pecora), but that is unavailable where I live. In California, Bellwether Farms make cheese, ricotta and yogurt with sheep milk from their own flock and Barinaga Ranch make cheese from theirs. I am not yet ready to get my own ewes in order to have their milk, so I make the best of what I have. 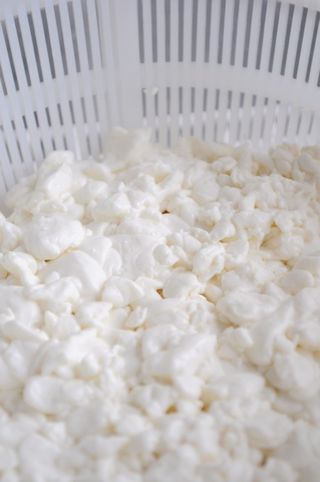 halloumi curds in the mold

I am not very good at taking photos while I am focusing on cutting and stirring the curds, so the first image is of the curds already nicely settled into the mold. 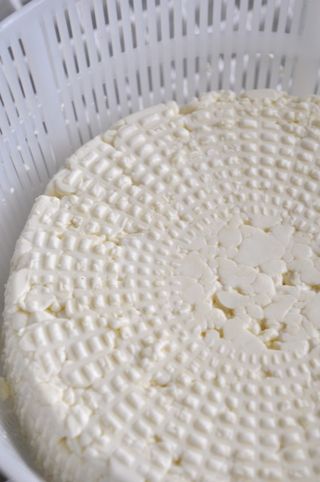 after the first flip

I use my ricotta basket as mold. 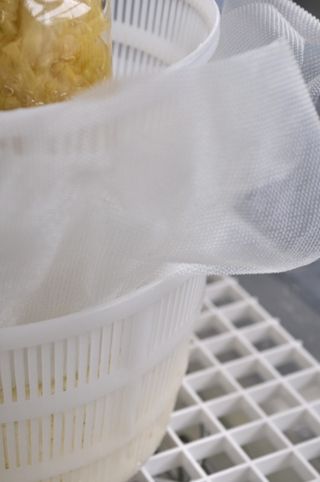 Only a light weight is needed and for a short time. The mold sits on a raised grate inside a draining container. I always collect the whey (siero di latte) when I make cheese, but in this case it is even more important to do so, as the cheese must be scalded in the whey. First, however, Anari is made.

The whey used for scalding must first be heated to about 195°F (91°C) to bring out the whey proteins from the liquid. This whey curd is then skimmed off and drained in baskets. If you were in Cyprus, you could call this whey cheese “Anari” and it looks just like Ricotta.

I make ricotta a bit differently from the way Jim describes in his recipe. I don't add milk and I use a small quantity of kefir whey (leftover from making kefir cheese) to acidify the whey when it reaches the high temperature.

The Halloumi is then boiled in this clarified hot whey until it floats. 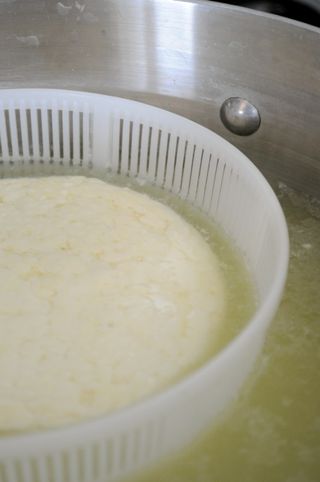 reaching the surface during scalding

When you first put the cheese into the hot whey, it sinks, but as the scalding proceeds, the cheese makes its way to the surface. I leave the cheese in the mold so it does not touch to bottom of the pot when I first immerse it. 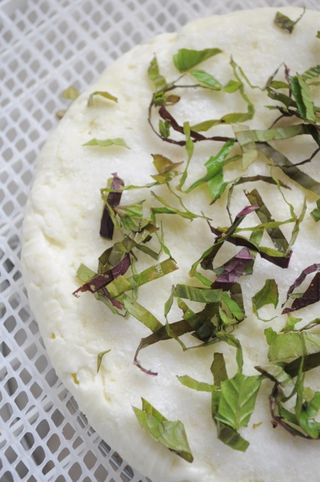 ready to be folded

When you take Halloumi out of the pot, it is malleable, so you can use your hand to flatten it a bit. Then comes the salting and the flavoring:

Halloumi is often garnished with mint to add to the taste. Traditionally, the mint leaves were used as a preservative. This practice came about when it was considered that Halloumi kept better and was fresher and more flavorful when wrapped with mint leaves.

I have plenty of fresh mint (menta) in my garden, so I used some of it for this step. The folded cheese is then ready for some rest in the fridge (four days), after which you're in for a treat. 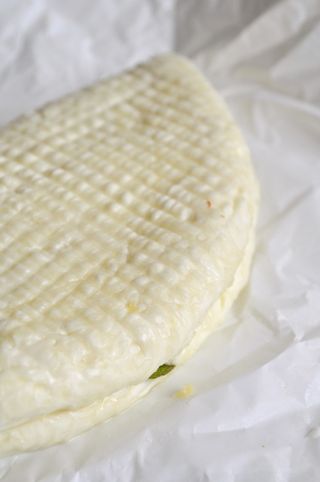 ready to be sliced

What's so special about this cheese? "Halloumi is also unique in having a high melting point and so can easily be fried or grilled." That's right: you can pan-fry or grill slices of Halloumi and they will crisp on the surface and soften inside, but won't melt. 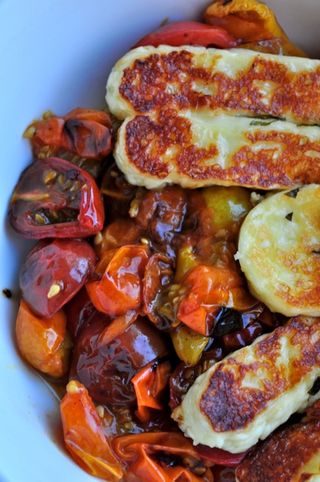 served on a bed of roasted cherry tomatoes

Although the cheese keeps its shape, its outward appearance turns into a crispy, golden-brown color when fried or browned and with grill marks when grilled, it softens significantly but it does not melt.

The photo above is dated July 23, four days after I made my first Halloumi. Up until then, I had served roasted cherry tomatoes with ciliegine, according to my recipe, but from that day on, it's always been Halloumi, pan-fried in a cast-iron skillet previously sprayed with olive oil.

Besides sharing my enthusiasm for homemade Halloumi, with this post, I am celebrating the fourth anniversary of my adventures in cheese making. It's been an incredible journey so far, and one that I have no intention to interrupt. In January 2011, I started a spreadsheet with the dates and summary details of the cheeses I make. (That was an improvement over my previous record-keeping method.) The other day, I looked at how many cheese entries there were for the past 20 months: 66! This number includes only the first record of making kefir, kefir cheese and yogurt. I make these three dairy products regularly (kefir almost every day) and I no longer record them.

In these four years, I have seen interest in making cheese at home steadily increase, as testified by the publication of several books on the subject. Most recently, Valerie of A Canadian Foodie has launched a year long event called Cheesepalooza, which encourages people to take up home cheese making via monthly challenges of increasing complexity. Starting something new together with other people is a nice way to overcome the shyness and trepidation that can prevent us from making the first step. The cheese chosen for the second month is basic chèvre and there are also several optional cheeses (like cream cheese and fromage blanc, which I have already discussed here, and crescenza, which I made last week and will make again to get some photos to share).

Update. The cheese for the third month is Halloumi or Feta, so it turns out I was a bit prescient with my post.

or launch the halloumi fatto in casa audio file [mp3].

Posted by Simona Carini on September 12, 2012 in Cheese making | Permalink

Wow! I've never heard of this cheese before or tasted it. Would have loved to taste yours.

Wow! This will be one of our cheeses this fall - we just made it Sunday on our cheese tour... I have bookmarked this post to "study" as I am in a rush right now - it looks considerably different that how ours was made. Cannot WAIT to compare notes!
SOSOSOSO excited to see such success!!!!!
Valerie

Ciao Paz. It's not easy to find it here as well and I can tell you it is quite expensive, all the more reason to try to make it myself.

Ciao Valerie. I am very curious to see what yours looks like.

Ooo... You made my all time favorite cheese! I love halloumi, but have yet to make it myself. Now that I look at yours it seems doable almost, so have to go out and get me some of those containers to start with.

Simona I'm very glad I opened my reader after such a long time and the first recipe that my eye caught was of course your halloumi. I am so happy you made halloumi and it looks wonderful. Now that I am in the countryside and can find fresh ewe's milk, I really want to experiment in making cheese. I will e-mail you.

Sounds like a wonderful cheese. I wonder how it might taste with cow's milk? I love cheeses that you can put on the griddle, like scamorza. The taste and texture of fabulous!

You will see how different Mary's recipe is from this one - this looks more traditional and I will love to try it. Maybe you can scan it and send it to me.
:)
V

Hi Simone. It is perfectly doable and I hope you'll give it a try.

Hi Ivy. You have a great advantage over me, having access to fresh ewe's milk. And you have a brand new kitchen in which to play ;)

Ciao Frank. I have never had Halloumi made with sheep's milk, so I don't know how it compares to mine. I can imagine it being richer, since sheep's milk has a higher fat content than cow or milk. My Halloumi does not have a strong flavor: it tastes fresh and the texture is a bit chewy once grilled, softer than scamorza.

Ciao Valerie. I'll look at Mary's recipe. You can print the recipe I used from the page I reference.

I love your tip of leaving the cheese in the mould during the scalding process. Smart. As I read all of these halloumi posts, I really cannot wait to make it myself. I chose the feta for this round but am absolutely going to make a point of trying the halloumi sooner rather than later. Thanks for sharing!

Hi Christine. I am glad you found my post helpful and having had a great experience making Halloumi, I recommend it.