Welcome to the roundup of the 16th edition of Novel Food, the literary/culinary event that Lisa of Champaign Taste and I created in 2007 and that I continue to host. Novel Food is about literary works (prose or poetry) that inspire the preparation of dishes.

Like all its predecessors, the current edition of the event includes an lovely set of readables and edibles. Please, follow me on a short literary/culinary tour. For each contribution, I will offer a small bite to whet your appetite for more: follow the link to read the details of the inspiring work of literature and of the inspired recipe. I hope that by the time you reach the end of this post, you will have a nice reading and cooking list to be used in the near future. 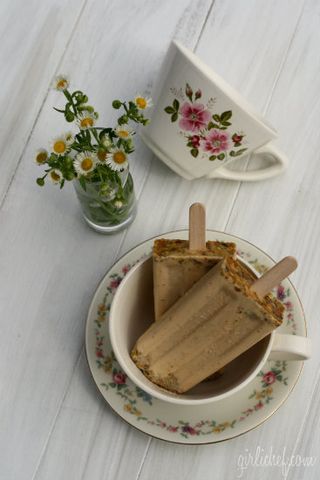 "Popsicles are enough to make anybody smile, right?  Especially when it's still hot enough outside to break a sweat.  So, in honor of Earl Grey (the Dalbrador) being safe and as a nod to their business and passion, I infused some of that tea by the same name that always seems to lift my spirits and bring me peace all at the same time, Earl Grey." 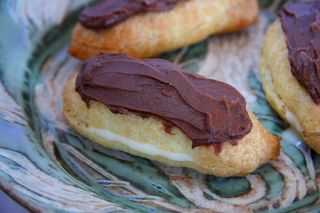 Ruhama of rumahama presents Peppermints in the Parlor by Barbara Brooks Wallace,
which inspired her to parepare some Eclairs

"Emily's just been orphaned and is going to live with her Aunt Twice at Sugar Hill Hall,... Through the course of the story, Emily is drawn into the confidences of Mrs. Plumly, who invites the poor girl into her private rooms for tea. There she has things like cherry cream tarts, lemon tarts and chocolate cream eclairs." 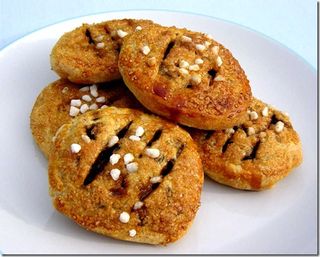 Phil of As Strong As Soup continues to find inspiration in poetry: his Eccles Cakes were inspired by Mrs Albion You’ve Got A Lovely Daughter by Adrian Henri.

The poem is "an ecstatic celebration of Liverpool (‘Albion’s most lovely daughter’) and the girls who live (or rather lived) there... I’m not pretending that this is an authentic Eccles cake recipe but it’s the way I like them to be... I prefer them cold or, even better, slightly warm." 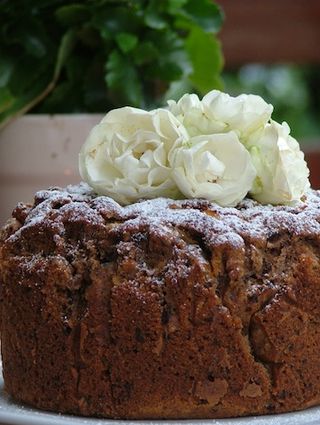 "The book... tells the story about this mountain, or I should say chain of mountains which is more correct. Monte Baldo is a chain, stretching from Nago/Torbole in the North of the Garda Lake, to Garda, 36km further south or more exactly San Vigilio, where it ends in the water. [the book] tells the story about the flowers, the trees and how once this mountain was called the Hortus Europae, the European Botanical Garden." 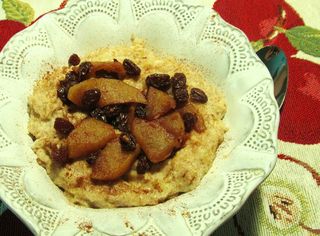 "I am cooking porridge, a nice version of porridge, and nothing resembling the stuff poor Jane had to eat during the Brocklehurst regime at Lowood.  Consider this porridge as my present to little Jane, who suffered much but never gave up her quest to find independence and love." 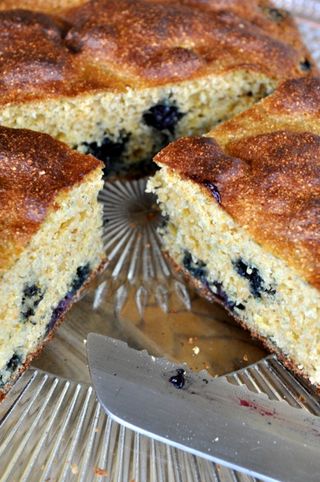 Inspired by The Warden by Anthony Trollope, Simona of briciole
prepared Blueberry Cornbread

"Please, help yourself to a square of the moist, golden cornbread punctuated with juicy blueberries that I just cut. It's light and substantial at the same time, lightly sweetened and rich in flavor. After partaking of this sunny bread, follow me as I introduce you to a beloved author and one of his novels." 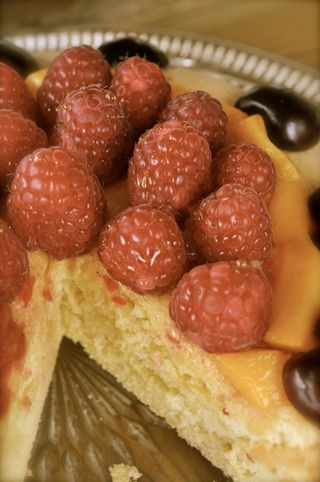 raspberries, mango and cherries on a soft cake

Simona of briciole was also inspired by A Mind to Murder by P.D. James
to prepare a Sponge Cake with Mixed Fruit

Superintendent Adam Dalgliesh (of Scotland Yard), "sensitive, taciturn, and hardworking" and also a published poet, is offered a lavish tea by Mrs. Fenton as a prelude to an important conversation: "fresh-baked scones, two kinds of sandwiches, home-made cakes and an iced sponge."

My special "thank you!" goes to the event's participants. The next edition of Novel Food will be in the fall: I will announce it here, on The Food Blog Diary, and other venues, so stay tuned. The Food Blog Diary is the lovely event announcement site created and maintained by Jacqueline of Tinned Tomatoes. Visit the site to read about current events and let her know about your event and she will post it on her well-organized site. Thank you, Jacqueline!

In the meantime, read good books (maybe with the next Novel Food in mind), cook good foods, and otherwise savor life's local and seasonal offerings.

What a fantastic and diverse roundup. I definitely have added to both my to-read and to-make lists! Thanks for bringing this fun event together, Simona :D

I always enjoy the wide range of dishes and literature in these roundups and this is no exception. Many thanks for hosting the challenge.

Yay! Thanks again for keeping this going--off to read!

No one could have done this more thoroughly! Incredible!
:)
V

What an inspiring list of readables and edibles! Happy 4th of July!

Sorry I could not participate in this round of Novel Food, but I have something in mind for the Fall involving Persian food and a lovely memoir I read recently. I love the array of interesting reading and delights for the table in this edizione.

You are welcome, Heather and Phil. I am glad you found interesting suggestions in the roundup.

You are welcome, Ruhama.

Thank you for your kind words, Valerie.

Thanks, Paz. Same to you!

Hi Rachel. I am looking forward to reading about Persian food.

Delicious fare for feeding imaginations and bellies. Sorry I missed this edition, Simona; nonetheless, I always enjoy the round-ups. Will definitely contribute in the fall.

Thank you, Susan. Looking forward to having you join the literary party in the fall.

Thank you so much, Johanna. Maybe the fall edition will work for you in terms of schedule. I am planning to read more P.D. James soon.

What a fun event! I can't believe I'm only just discovering it. There's nothing better than reading about food in novels - except eating it too! :)

It's never too late, Susan. I am glad you like the idea. If you'd like to join us, the next edition will be in the fall: stay tuned!