Years ago, some time after I had moved to California, a colleague described to me a squash whose pulp, once cooked, looked like spaghetti. I remember that, as I was listening, I thought "Well, it's not April 1st, so this story unrelated to the time of year." I thought that it was a story like that of spaghetti growing on trees. In this case, spaghetti grew close to the ground. The background to the story was my curiosity about zucca (pumpkin, winter squash), a food that had never appeared on the table when I was growing up and that I was slowly learning to know.

When later I saw some melon-like fruit labeled "spaghetti squash" at the grocery store, I had to receonsider my position. I bought one of the squashes and verified that indeed, once cooked, the pulp of this squash separates in strands that remind one of broken spaghetti.

A short detour. Learning to wrap spaghetti around a fork takes a bit of practice, so young kids have their portion cut into short strands that can be more easily handled. However, it becomes a point of pride to be able to eat spaghetti properly, and once that happens, having an adult cut your spaghetti is an affront. While I have forgotten the details of my evolution on the spaghetti-eating path, I preserve the negative gut-feeling reaction to the sight of someone cutting spaghetti. There was one dish for which my mother broke spaghetti into short strands: cauliflower soup (minestra di cavolfiore). However, the breakage in this case occurred prior to cooking. 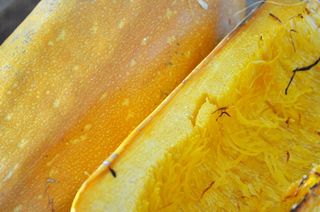 Back to spaghetti squash, I like that it offers a chance to prepare squash in different ways, namely to dress it as if it were pasta. Due to its thick skin, spaghetti squash stores well. The one in the photo has spent several months in my storage space without problems. I must admit that my technique for removing the pulp from the skin needs refinement: I could not get strands longer than a couple of inches, which means my plate of "spaghetti" is not likely to fool many people. (And considering my feelings about broken spaghetti, having a bowl of it did not make me particularly proud of myself.)

But whoever is fooled, once they take the first forkful to their mouth, will hear me squeal: "Pesce d'Aprile!" All right, that in theory would happen only if the date were April 1st, as explained in this post. But over at Very Good Recipes, April 1st will stretch for the whole month of April, thanks to the April Fool Challenge. I am one of the judges, so my post does not take part in the challenge, but is meant to illustrate what we are looking for in the entries submitted for it.

The "spaghetti" in the top photo were dressed with a simple tomato sauce (sugo di pomodoro). Last summer, I made several batched of strained roasted tomatoes and froze them in one- and two-cup sealable bags. When I want to make some tomato sauce, I grab one of the two-cup bags, thaw it and the sauce is ready in a short time.

Preheat the oven to 375 F. Cut squash in half lengthwise, remove seeds and threads (a grapefruit spoon is an excellent tool for this task), place on a lined baking sheet and bake for 40 minutes or until pulp is cooked. Let cool briefly, then with a fork, remove the pulp in strands and place in a large bowl. Sprinkle a bit of salt and stir. Note that spaghetti squash can also be cooked in a microwave or boiled. I favor the oven because it imparts a nice flavor to the squash and dries out some of the water it contains.

In a small saucepan, warm up a bit of olive oil, then add shallot and thyme. Cook gently for a few minutes, then add garlic. Cook for a couple of minutes, then add tomatoes. Bring to a simmer and cook for 8-10 minutes. Adjust salt, to taste.

Place some of the "spaghetti" in each bowl, distribute some tomato sauce over it, then sprinkle some cheese and serve immediately.

When you eat the first forkful, you'll notice that this spaghetti has a different texture from pasta and the taste is different as well. It's probably better to compare spaghetti squash with other types of squashes. The strands maintain a certain amount of bite, which allows the visual illusion. The flavor is quite mild, so choose some condiment or a nice sauce to go with it — as in the case of pasta, come to think about it. And as in the case of pasta, I recommend not to overdo with sauce, cheese or whatever else you are adding.

All the details of the challenge are explained on this page, so I won't repeat them here. The page also has the list of judges and the entries submitted so far, starting with those from the judges. Take a look at what's on the page, so you can get some ideas to get your creativity going. You have until Monday, April 30th to submit your entry according to the specifications laid out on the page referenced above. We are looking forward to reading about interesting variations on the theme of "fooling" someone at the table.

I do enjoy spaghetti squash served this way, but haven't had it in quite awhile. Thanks for the inspiration, and the challenge also sounds fun. I'll have to think of something suitable.

I've never tasted spaghetti squash before. I like the idea of your sauce in bags, ready to be thawed and used. Last of all, I love the new look of your blog. Bellisima!

Hi Claudia. It is indeed fun to prepare spaghetti squash this way and the result is quite healthy.

Ciao Paz. I am glad you like the new blog skin. I felt that with the arrival of spring, a bit of change would be good. In California, you can still find squashes in the grocery stores, imported from Mexico. Not sure about NYC: you may have to wait until September. Then you can grab a spaghetti squash and have fun with it. The frozen tomatoes are really handy. I'll definitely make more this season.

I enjoyed your description. This squash has been intriguing me for some time now, too. How was the taste?

Hi Frank and thanks for your question, which made me realize that, in focusing on the look of the squash, I had overlooked the taste. I have since added a paragraph that describes the flavor of this squash. In a nutshell, it is mild so you want some condiment or sauce to brighten it up.