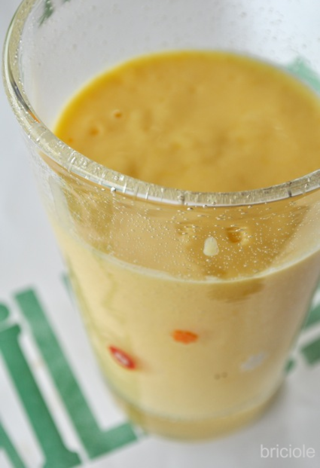 mango lassi made with kefir

A couple of months ago, I made kefir using this culture. The process was straightforward and in about 24 hours, we could taste it. I ended up making fresh cheese with it: I will described that in an upcoming this post.

While my first adventure with kefir was unfolding, Jeri, who writes the blog of the New England Cheesemaking Supply Company, published a three-part summary of information received by readers of their newsletter: 1. ordering kefir grains; 2. growing kefir grains; 3. using kefir grains.

In the first post, I learned more about kefir grains (grani di kefir) and the difference between them and the culture I had used. The cultures have probiotics in them, but "nowhere near as many as in the living grains." Probiotics are defined as living organisms, which upon ingestion in certain numbers, exert health benefits beyond inherent basic nutrition.

Kefir is a unique cultured dairy product due to combined lactic acid and alcoholic fermentation of lactose in milk. Kefir is produced by microbial activity of “kefir grains” which have a relatively stable and specific balance of lactic acid bacteria and yeast. [source]

I decided I needed to get some first-hand experience of the interesting-looking kefir grains. At the same time (and I guess this was all part of a grand scheme), Claudia of Honey from Rock wrote about her adventures with kefir. Shortly afterwards, I spent a few days on the Big Island and visited Claudia 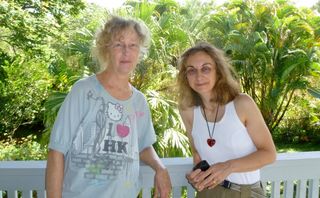 Among the many goodies that Claudia gave us (I already mentioned one in this post), there was a small bag with some kefir grains in a milk bath. They did fine on the trip back and as soon as I got back home, I started my first batch of kefir.

Basically, it does not get easier than this. You still need to be careful about sanitizing the tools you are using, but really, making kefir at home is a breeze: you only need a glass jar, a strainer and a spoon or something similar to move the kefir grains. I sterilize the glass jar in the oven and the lid with boiling water. When the jar has cooled, I strain the kefir grains (from the previous batch of kefir or from the milk in which they were resting in the fridge). The photo above is from a while ago. Most recently, instead of straining the kefir grains, I spoon them out, taking advantage of the fact that they tend to be at the surface of the jar of ready kefir. I then strain the content of the jar to separate small grains left behind. I have not read this anywhere: I feel like this way I stress the grains less. In any case, when straining kefir grains, be gentle.

Add milk of choice to the jar (I use pasteurized organic milk straight from the bottle) and then the strained kefir grains, cover the jar (leaving the lid just a bit loose to allow the CO2 produced to escape), then set it aside in a warm, dark place (or wrap it in a kitchen towel). The kefir grains will take it from there and deliver kefir within a certain number of hours. It takes me 24 hours to get kefir, sometimes a bit longer, depending on the temperature. Once strained, I store kefir in the fridge and let it ripen for a day or two before using it.

Rather than go into the details of the set up, which is described in details in a number of places on the web — like this page and also this page, the one most people reference — I have summarized in a diagram the ways in which I have used kefir in its natural or drained state (arrows pointing down from "kefir"). The arrow pointing up from kefir grains means that I reculture milk with the grains strained out of the previous barch. I don't make kefir continuously. When I don't need more kefir than I have, I place the grains in a jar, cover them with milk and put them in the fridge for a few days. Since the grains grow while also making kefir, you may want to find a friend who wants to try and give her/him the extra grains that you get. 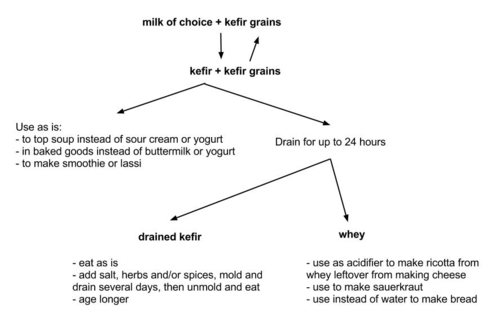 I have already shown one of the ways in which I use kefir in this post, where it substitutes sour cream topping for soup. The mango lassi in the top photo was made with

And the beautiful scones below were made using kefir instead of buttermilk (latticello). 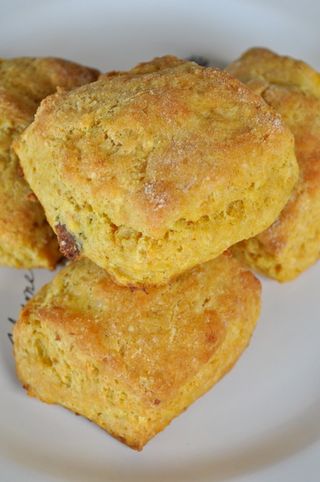 If you go to Honey from Rock and enter "kefir" in the Search field, you get the list of posts where Claudia talks about her adventures. The idea is that once you have kefir, you come up with various ways to use it. That is, at least, what happened to me.

Due to the claimed health benefits of kefir which include reduction of lactose intolerance symptoms, stimulation of the immune system, lowering cholesterol, and antimutagenic and anticarcinogenic properties, kefir has become an important functional dairy food and consequently, research on kefir has increased in the past decade. [source]

There are indeed a number of scientific papers describing research that looked more closely at the composition of kefir grains and at various effects of kefir administration to mice and rats. There are studies on specific health effects of kefir consumption in humans. For example, in this one on people with lactose maldigestion, kefir improved lactose digestion and tolerance. In other areas, results have been mixed (as this article summarizes): I hope larger studies will be conducted. In the meantime, I will continue enjoying making and using kefir at home.

Exciting update (May 26, 2012): my kefir story is featured in today's post on the New England Cheesemaking Supply Company blog.

or launch the kefir fatto in casa audio file [mp3].

You always amaze me with all the great things you make. I wish I could make some kefir.

Thanks, Ivy. I know you can find kefir grains in Italy, so it may be possible to do so in Greece as well.

Since you've let me know about this upcoming article I've been awaiting it everyday :.) I like kefir a lot and use it for baking, too. Once again I have to say I admire you for doing it yourself! I'd love to taste homemade kefir. Your scones are beautiful!

Ciao Catalina. If you can find someone with kefir grains, give it a try. In the US, you can also order the grains from various vendors. I am not sure about Europe.

That mango smoothie looks so good. I want to try the alternative puff pastry recipe you mentioned in another thread. Is it alternative because gluten free? Also, I've been using some of the whey in my kefir lassi drinks, which gives a bit of tang. Of course I tend to like them on the savory, salty side.

Hi Claudia. The alternative comes from the fact that the recipe uses ricotta instead of some of the butter and water. Interesting use of the whey. I am planning to taste some of the sauerkraut I made, so if it is good, I will make more.

Turns out I grew up in a household with a bowl of kefir. We used to call it yoghurt, but I recognize the little animals now! We ate it as if it was yoghurt. It was a bit of a chore to look out for it, and after a few months (years) the product turned to be too acidic, but with the right strand, it tasted delicious. I wish I had had all this inspiration back then!

So interesting, Caffettiera, that you had kefir at home. Maybe you'll be inspired to make kefir again. I have a couple more posts planned showing what you can do with it.

Hi, Simona, my 1st visit to your blog. You have written a very interesting article about kefir. It seems like I've attended a class! By the way, I'm also one of the judges for April Recipe Challenge, organised by the VGR, nice to meet you!

What an informative post! The mango lassi and the scones are just lovely - beautiful spring colors and the photos are so pretty.

I love the photo of you and Claudia!!
Lovely post Simona, and I agree with Martissima..you should start to sell. :-)
I would love to try all of this..and while I'm to busy doing anything else, I do save all you posts and all you suggestions.
Sooner or later I will try!
I wish you a nice Sunday.
baciuss

Hi Jessie. Thanks for the visit and for the kind words. I am glad you liked the post.

Ciao DueSpaghetti and thanks for the kind words. The lovely color of the scones is due to a couple of ingredients rather unusual in scones. I am planning to write a post about them, since they are really good. I have made a dozen batches recently.

Ciao Brii. Claudia has an amazing garden. Making kefir is really not difficult. The only thing is not forget about it (which I almost did, last night).