You may have noticed a new badge on briciole's sidebar It was created by the wonderful people at TypePad and offered to bloggers whose interest is in handmade things. As you know, briciole is mostly about things handmade in the kitchen (cucina), but I like to make things with my hands also outside of it, and I thought this would be a nice way to meet new bloggers and learn new things. Let me introduce you to three of them whose blog I visited this past week: Molly of Molly Hashimoto is an artist and teacher in Seattle. On her blog,... Read more →

results of the Breakfasts of the World Challenge on Very Good Recipes In early January, I talked about fare colazione (to have breakfast) in Italy and announced the challenge for which I would be one of the judges. The results are in and the three winners are: Breakfast full of vitamines: French citrus crepes by Poppy Cooking Flatbread from Savonia: Savolainen Pannurieska for breakfast by Naked Plate Soda bread with tomato, bacon, black pudding & an egg by Jenny Eatwell's Rhubarb & Ginger Congratulations to the winners and a big thank you! to all who participated — and made our judging... Read more →

Savoy cabbage and kale soup Since I started writing (mostly about food), I look at memories and memoirs with a different eye. I grew up with a father who was constantly narrating stories and a mother who basically never did. When I was a kid, I listened to my father, but I was not fully aware of how important such transfer of information was. Now I have a different perspective. A little voice inside me has been saying that I should record my father's stories. The voice grew firmer after I read Anna, Heart of a Peasant, by Carol Marie Davis.... Read more →

[cliccare il link per andare alla versione in italiano] The Romans ate puls made with farro, millet and other grains boiled in water or milk. Corn (granturco) from the Americas was introduced in Europe in the 16th century. Corn cultivation expanded to Italy in the 17th century and was rapidly adopted, especially in the Northern regions. Polenta made with corn became a staple of the lower classes, in part because corn was cheaper than the wheat used for bread, but also because of the sense of satiety it provided. coarse cornmeal (called polenta in the US, bottom left), stone-ground cornmeal (top... Read more → 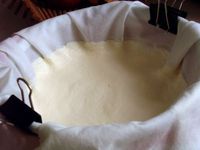 Paola of An Italian Cooking in the Midwest and Brii of briggishome have invited me to the seven link challenge (here and here): albeit with some delay (for which I apologize), I am hereby taking it up. It is a difficult challenge to answer, because it asks me to choose a post with specific characteristics and since I have about 500 posts, it is not easy to keep all of them in mind. So, my choices come with the disclaimer that they represent my current thought and are subject to my memory. In a month, I may have a different set... Read more →