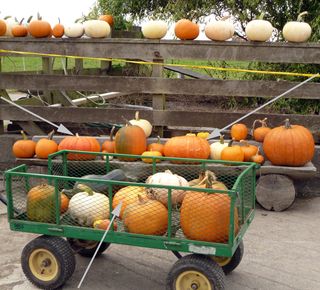 The cart in the foreground contains the result of our visit to the Warren Creek Farms pumpkin patch last October. Besides three pumpkins for carving, we chose several other specimens, like the Cinderella pumpkin indicated by the arrow. Since it is partially hidden, I have drawn two arrows to indicate two others that were on display. The original name of this variety of pumpkin is Rouge vif D'Etampes, but Cinderella pumpkin (literally, zucca di Cenerentola) fits it perfectly.

The pumpkin was so pretty, I could not bring myself to cook it. I have a cold room that is perfect for storing squashes, but even there they don't last forever, so one day recently, I decided it was time to bake the Cinderella. I pierced it in several places with a blade and put it in the oven preheated to 375 F for about half an hour to slightly soften it. When the pumpkin had cooled a bit, I cut it in half and scooped out the seeds (a grapefruit spoon is perfect for this task). I did not discard what I had removed from inside the pumpkin (see below).

I put the two pumpkin halves back in the oven, cut side down, until I could easily pierce the flesh with a blade. I took out of the oven the baking sheet and let the pumpkin cool. I discarded the water that was released by the cooling pumpkin. I then scooped out the flesh (again using the grapefruit spoon) and put it in a colander set over a bowl. By the time I was finished with the two big pieces of cooked pumpkin, a bit more water had been released and I discarded that as well. On this page, you can see some photos of the process I somewhat followed. Note the color of the roasted pumpkin in the photos: it resembles that of oranges, and it is lighter that that of canned pumpkin. This has an impact on the color of the bread (more on this at the end of the post).

At this point, knowing that I would use the pumpkin to make bread and also ice cream, I put it in a bowk and processed it briefly with an immersion blender. I immediately froze more than half of the purée and refrigerated the rest until ready to use it. I also rinsed the seeds I had removed from inside the pumpkin and roasted them at 375 F until they were crisp. The seeds (semi di zucca) were larger than those of the pumpkins my husband had carved for Halloween and very tasty. In the part of Italy where I grew up, roasted and salted pumkpin seeds are called bruscolini. 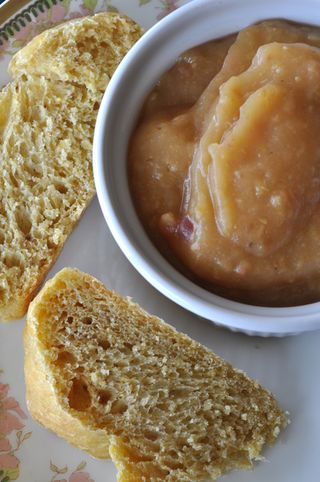 As I write, I have already made this pumpkin bread several times. The photo above shows it accompanying some roasted applesauce. It goes really well with cheese and it is a pleasure to nibble a slice au naturel. The recipe for the bread comes from the King Arthur Flour website. I always halve the quantities to make one braid. Originally, I was worried that the spices (spezie) would be a bit too intense, but that is not the case. I weigh the flours and some of the other ingredients, so my list is as follows:

The original recipe calls also for 1 1/4 ounce (35 g) brown sugar. A few times I used 1/2 ounce (15 g) of honey (miele), but the last time I made the bread, I skipped the sweetener altogether and I liked the result better.

Making the bread following the instructions on the KAF recipe page is pretty straightforward. The only thing I did differently is the use of convection baking. Since my oven adjusts the temperature automatically when selecting the convection baking option, I still set it to 350 F. And in my oven, the bread bakes in 25 minutes. 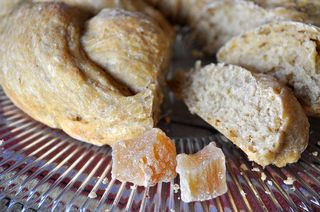 The photos I had of previous realizations of this bread, apart from the one with the applesauce, were not satisfactory. The photo above shows the unsweetened pumpkin bread I baked yesterday, together with some candied ginger: it was made with another one of the pumpkins in the cart at the top, the oblong green one to the left of the Cinderella. Unfortunately, I failed to ask the name of the variety. The color of the roasted flesh is lighter and more yellow, which explains the different color of the bread. When you make your own, consider that the color of the pumpkin will have an effect on the color of the bread.

I am submitting this recipe, bookmarked on the King Arthur Flour website to the December edition of Bookmarked Recipes, an event originally started by Ruth of Ruth’s Kitchen Experiments and now hosted by Jacqueline of Tinned Tomatoes.

I think this bread makes a great breakfast option, topped with preserves or cheese or used to make French toast, so I am submitting the post to the December edition of Breakfast Club: an event started by Helen of Fuss Free Flavours. Guest-host Krithi of Krithi's Kitchen has chosen Bread as the theme for the event.

That sounds amazing, I need to try baking bread without gluten, something that intimidates me.

I agree with Laura. This does sound amazing, indeed. I really like what you did with the pumpkin. I also like the white pumpkin in the cart. Never seen that before. Oh! And I love the name, "Cinderella pumpkin". ;-)

Ciao Laura. I'd be intimidated as well. If there ready-made mixes for making bread, I'd probably start by trying one of those.

Ciao Paz. I am planning to talk about at least some of the other pumpkins in the cart at some point.