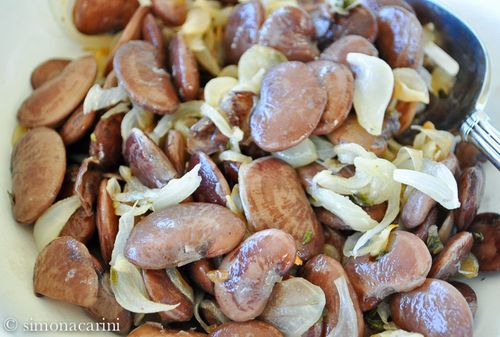 For the current edition of Cook the Books, we are reading Harlot's Sauce: A Memoir of Food, Family, Love, Loss, and Greece by Patricia Volonakis Davis. The author falls in love with Greece — or, to be more precise, with her idea of it — then with a man of Greek origin, Gregori. Their marriage ends in divorce, but in the process, Volonakis Davis experiences life in her beloved Greece and gets to know herself and her capabilities. Throughout the book, the tone is delightfully self-deprecating, which makes the reading eminently enjoyable, even — maybe especially — when we recognize ourselves in the protagonist.

The book talked to me, so to say, on an additional level: In describing what it meant to grow up in an Italian-American family, Volonakis Davis shows that certain cultural values survived intact the Atlantic crossing. She does a great job explaining the concept of figura. I have an emotional — rather than intellectual — sense of what it means. It's a fundamental tenet of education in an Italian family: you are supposed to always fare una bella figura (literally, to cut a fine figure, in the sense of making a good impression), which then reflects well upon your family. The worst thing that can happen is fare una butta figura (literally, to cut a poor figure, in the sense of making a bad impression), which of course embarrasses the whole family. [Volonakis Davis also talks about malocchio (evil eye) and there, though I understand her, I have no direct experience: I don't remember anybody in my family ever mentioning it.]

Let me now move on to more lighthearted notes. At one point, Volonakis Davis talks about the beloved puppet mouse Topo Gigio and about calcio (soccer). One day, Topo Gigio was a guest at the Ed Sullivan Show. I honestly don't like that video for various reasons, so if you don't know who Topo Gigio is, I suggest you watch him sing Frank Sinatra's "Strangers in the Night" in this video. You can watch Topo Gigio on YouTube: I particularly like the videos where he is next to singer and dancer Raffaella Carrà. In talking about the soccer team (squadra di calcio) Cosmos, Volonakis Davis mentions the player Giorgio Chinaglia. I hadn't thought about Chinaglia in many years, but since my mother was a fan of Lazio, the team with which he played, I remember the brouhaha surrounding his move to the US (in 1976).

Back to the book, I read it with pleasure. I got very engrossed in the story, especially the part where Volonakis Davis builds a business while living in Greece. Food certainly plays a role: it could not be otherwise with an Italian family and a Greek one as protagonists. One of my favorite episodes of the book occurs in Crete, on the name day (in Italian, onomastico) of Gregori's uncle, who is a priest. Volonakis Davis describes the procedure followed to manage the visitors who come to the priest's house to offer well wishes: how visitors rotate in sitting with Papa Elias, what is served to whom, etc.

As the tension within the marriage grows, Patricia and Gregori express their unhappiness in various ways. For example, Gregori, called upon to prepare dinner, always makes beans, because his wife hates them (there is a bit more to the bean story, and you'll find out if you read the book). That reminded me of gigantes, the beautiful Greek giant beans (or elephant beans) I have admired in recipes by Ivy of Kopiaste and Peter of Kalofagas. I had never seen those beans, but I thought I would look for them, but then something happened that changed my plans.

In mid-October, I visited my hometown of Perugia and, as always when there, I went to Drogheria Bavicchi to get some legumes (see this post for more information). I was hoping to find more of the lenticchie nere ennesi that I described in this guest post, but alas! no such luck. However, one cannot leave that store empty-handed: they have such a selection of legumes that I always find something new to me. This time was no exception. The first type of bean I got is quite large and really pretty, burgundy mottled. It is a type of lima bean that actually exists in this country too: it is called Christmas Lima or Chestnut Lima bean. I had in fact seen it in a store in the Bay Area and liked the way it looked. 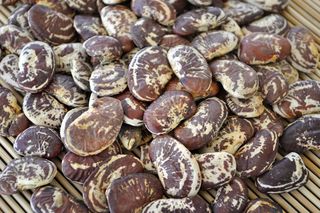 The beans I purchased are called monete del Papa (literally, Pope's coins) and are not grown in Umbria, but they come from Piemonte, in the Italian Northwest. I was recommended to soak them for 24 hours. In terms of preparation, I decided to give the whole stage to the beans and their bold flavor reminiscent of boiled chestnuts (castagne, hence their name), with some onion (cipolla) as supporting cast. I prepared them the first time for my father and he liked them a lot. I bought more and prepared them for my husband in the same way.

The way I cook beans for further use comes from "Vegetarian Cooking for Everyone" by Deborah Madison (Beans with Aromatics). Rinse beans well, then soak in 4 cups of water for 24 hours. Drain, place in a saucepan and add enought water to cover them by about one inch. Add a quarter of a large onion, halved, a bay leaf, a clove of garlic, quartered, and 3-4 sprigs of fresh parsley. Bring the water to a lively boil quickly, and keep it there for five minutes, then turn down the heat and let the beans simmer, covered, until they are ready. Note that these beans take quite a bit longer than smaller beans to cook. Taste them to assess when it is time to remove them from the heat. Let them cool in their broth, then remove the aromatics and discard them.

Oil a skillet and add onion and thyme leaves, and cook gently until onion is nice and soft. Add some broth, as needed, to keep the onion moist. Season with salt and pepper to taste. Drain beans and place in a bowl, add cooked onion, season appropriately, stir well and serve warm or at room temperature, with olive oil (olio d'oliva) drizzled on top. 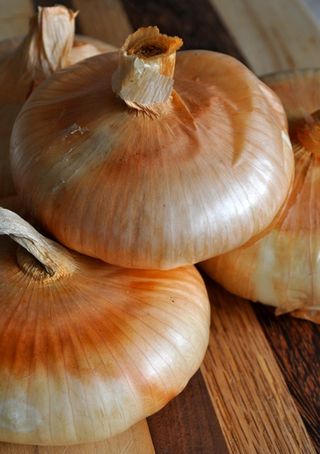 As mentioned in a previous post, I get the "cipollini" onions in the photo from my mostly-fruit CSA, Neukom Family Farm. These onions are excellent in flavor and keep very well, so I am partial to them.

Going back to the passage that inspired me, I was particularly struck by the fact that in the relationship between Patricia and Gregori, food became a way of expressing growing unhappiness. We usually use food in the opposite way. Now, of course, I wonder if Volonakis Davis still hates beans. Update (December 14): in this post, you can read the answer to my question. Thanks, Patricia!

This is my contribution to the current edition of Cook the Books, hosted by Johanna of Food Junkie not Junk Food. You can find the guidelines for participating in the event here, and here is the announcement.

This post contains the roundup of the event. Update (December 14): the recipes contributed by Cook the Book Club's members are now featured on a page of the author's website.

The bold colored and flavored chestnut beans make this post suitable for My Legume Love Affair 41, the current edition of the popular, legume-centered event created by Susan, The Well-Seasoned Cook, and hosted this month by Simona of briciole (that is, me).

This post contains the first part of the roundup and a link to the second part.

I didn't really enjoy the book, but can see where it would resonate for those who grew up with a background similar to Davis'. Excellent choice of beans prepared with love and respect.

Another lovely review and post. You always make me really go back and think about the books we read with your insights. The beans look delicious--I love any kind of bean simply and beautifully prepared. Wonderful job! ;-)

I did learn a lot about what it must have been like growing up as a first generation Italian (and Greek) from this book. I think your dish is very apropos for the book. Great post.

I'll order the book as soon as I'm finished with my current stash.
The beans look fantastic, I'll have to hunt them next time I go to Italy. I was thrilled by your remark about their chestnut flavour. To both my grandfathers, saying that a bean tasted like chestnuts was the biggest compliment you could pay to them ('par castagne!').

Love the bean dish. So simple, yet elegant. I always enjoy finding new beans to play with.

Thank you so much, Deb, for your kind words.

Ciao Caffettiera. Good chestnuts are one food I miss. We would buy a case in the fall and then my mother would alternate between roasting them and boiling them. We always had them for dinner, as dessert basically. I am planning to write about a soup that includes chestnut as ingredient: stay tuned.

Glad you liked the book. I didn't think I would ever say that for beans, but those are quite good looking little fellas!

I'm so glad you liked the book as much as I did! Those are beautiful looking beans--in fact even my bean-hating boyfriend admitted how beautiful they were :) guess we should look into trying them ourselves.

I enjoyed learning about these beans from your post. Great job for Cook the Books!

Great recipe and information, I love when some info on a recipe is given.

Hi Danielle. I am glad that heirloom beans are becoming more and more available as they tend to be pretty, like this kind.