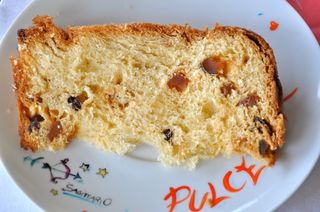 It is rather early to talk about panettone, but I have had the opportunity to taste one now and so I'll write a short Holiday preview.

I have always loved panettone: more than any other food, it means Christmas to me. As I wrote in an older post:

Both panettone and pandoro are of soft, delicate texture. Panettone is studded with uvetta (raisins) and canditi (candied orange and citron peel), while pandoro is plain inside... The names panettone and pandoro contain the word pane (bread), suggesting that they are special breads, made for particular occasions.

Bauducco Foods is a company based in Brazil that was founded in 1952 by an Italian. I totally understand Carlo Bauducco's desire to bring to his adopted country one of the best traditional products of his country of origin. I actually made panettone at home two years ago. It is a rather lengthy process and not having a stand-up mixer made it even more laborious. Bauducco's website states that their panettone "takes 52 hours to produce due to the natural fermentation and cooling process." Panettone production cannot be rushed.

The result of my efforts was good... to make French toast. However, my heart skipped a bit when at some point my kitchen smelled unmistakably of panettone, a heavenly mix of sweetness, vanilla and citrus notes. When you unwrap a panettone, the fragrance that envelops you is the prolog of a complex gustatory experience. A slice of the tall, soft-as-a-cloud cake is a perfect combination of flavors and textures.

I was pleased by the softness of Bauducco panettone. My husband and I enjoyed a slice after dinner, by itself. My father used to cut the first panettone of the season after the traditional Christmas Eve dinner, and then we had slices of it and of pandoro pretty much every day during the Holidays. Come to think about it, this year, other things have been happening earlier than usual, including the first storm (which has been dumping rain since yesterday) and the first cold spell.

Many thanks to the Foodbuzz Tastemaker Program and Bauducco for offering me the opportunity to taste the panettone.

Depending on your set-up, the audio file will be played within the browser or by your mp3 player application. Please, contact me if you encounter any problems.]

Too bad panettone doesn't work without gluten! I used to overdone on it, I love it so much.

Where can you find this product in the Bay Area?

panettone is one of my daughter's favourite cakes. she can't get her tongue around the word yet, so she calls it 'raisin bread'. i doubt if i'll ever embark on a panetonne making mission, but i enjoyed getting to know a bit more about it from your post. lovely read, simona :)

Ciao Laura. I don't have experience baking with gluten-free flours, but I can imagine you would not be able to get the rise panettone needs, right? I could not find that information on their website, so I sent an inquiry. I will let you know what I find out.

Ciao Pia. Making panettone at home was a good experience. I am glad your daughter likes it. A child with a big slice of panettone is such a sweet image. Thanks for your kind words.

The photo makes me drool, I swear! As soon as December arrives, our stores are filled up with these delicious sweet breads. I just can't resist and always buy at least two :D Even though it does not belong into our Czech Christmas tradition at all, I can't imagine the holidays without it. I too tried to make it at home but it didn't taste as good as the one from the store. I don't know, maybe it is impossible to make good pannettone in a home kitchen. Anyway, I'm so jeleaus that you can buy panettone even now :D

I oscillate, I still do. I loved pandoro as a child but years of eating the best artisanal panettone in Milan changed my mind. If is it industrial I'd still go for pandoro. If it is artisanal... Do I really have to choose? Or if I do, I'd skip them both for torrone, the hard variety. I could kill for good torrone.

Ciao Catalina. I had no idea panettone was popular in the Czech Republic. I am glad you get to eat it: I think everybody should taste it. It's too good to miss. Maybe one day I will try again making it at home, after I have taken a class on pastry that it's been on my wish list for a while.

Ciao Caffettiera. You've been spoiled in Milan, like me. My father is the torrone fanatic of the family. I liked the one with the dark chocolate around, or the chocolate hazelnut one (morbido). Oh my, dangerous thoughts so early in the morning ;)