As member of a grain CSA, I receive a monthly share that includes various stone-ground, whole-grain flours, like wheat, barley and rye flour.

Rye is a cereal grain that looks like wheat but is longer and more slender and varies in color from yellowish brown to grayish green. It is generally available in its whole or cracked grain form or as flour or flakes that look similar to old-fashioned oats. Because it is difficult to separate the germ and bran from the endosperm of rye, rye flour usually retains a large quantity of nutrients, in contrast to refined wheat flour. (source: the world's healthiest foods) 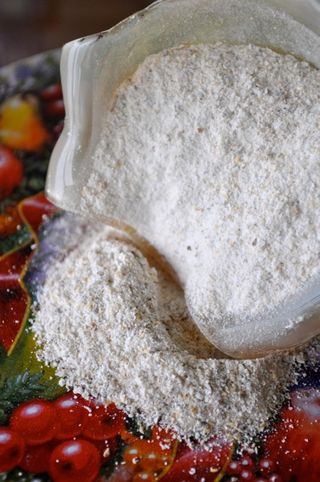 I have been admittedly slow at taking up rye flour (farina di segale), but recently I have found two recipes that are fantastic. This is the first one, and it comes from Dan Lepard, whose book The Handmade Loaf is one of my most used bread baking books. You can tell by the amount of flour that hits your face when you open it on certain pages.

When I read his recipe for rye apple cake, I knew immediately that it would be great. I have made it three times and three times I managed to take so-so photos of what is really a nice, moist, deep-flavored cake. On the other hand, I like the photo of the rye flour.

I made a few adjustments to the original list of ingredients, mostly to reduce the amount of sweetener, and the end result is as follows:

Note 1: the original recipe does not specify the type of rye flour. The flour I get is stone ground and some of the bran is in large flakes. I sift them out, toast them and add them to yogurt.

I followed the instructions as stated in the original recipe except that I did not need to grind the almonds, since I had almond meal and did not dust the cake with sugar before putting it in the oven. 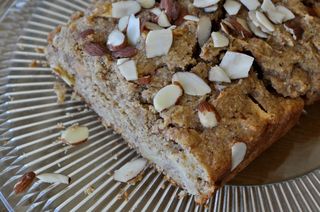 A great cake for a sweet breakfast or to go with a cup of tea (una tazza di tè).

This is my contribution to the July edition of Healing Foods, the event created and organized by Siri of Cooking with Siri and hosted this month by Simona of briciole (that would be me). I chose the theme of the month to be whole grains and whole-grain flours.

A grain CSA! What a wonderful idea! I was thinking recently I needed to do more with rye flour - this apple cake could be a good start!

I like the idea of rye apple cake. Yum!

I do love our grain CSA. I have just confirmed my share for next year (it's actually half: I share it with another person). I really like this cake. I have another rye-related post in the pipeline, so stay tuned ;)

Yum, indeed, Paz. And it's also quite easy to put together.