If you open my pantry, you won't find much canned food. There are a few exceptions and I will describe them within the context of the Tin Can Recipes event dedicated to celebrate 200 years of canned food. (If you are interested in the details of the story, this page has a brief description of the relevant events.)

The first exception is tomatoes. Considering that I live in California (the leading producer of tomatoes in the US), I should be able to can my own tomatoes in the summer, right?, but the fact is, I have not yet developed a liking for tomato preservation. This past summer, I did a little bit of roasting and puréeing of tomatoes, which I then froze, but it was a no-pressure enterprise, totally different from the almost industrial operation my mother would set up to bottle tomatoes for the whole year. I am not an industrial operation person: I prefer micro-batches of whatever I am doing.

Once tomato season is over, I switch to organic canned tomatoes from California, the format depending on the recipe I am making. A favorite kind is organic fire-roasted crushed tomatoes. I also use fire-roasted diced tomatoes. Very well, then, I'll admit it: I like roasted tomatoes a lot.

I have written an enthusiastic post about a gift I received in late 2009 from Gattina of Kitchen Unplugged. Thanks to the gift, I learned to make a version of Catalan picada, and the more I make it, the more I like it. Using the picada set Gattina sent me worked for the first realization of a recipe for chicken with Catalan picada. I then adjusted the recipe to use available ingredients.

The original recipe I chose is here: I follow it fairly closely, especially in terms of execution. The following are the adjustments that I made for last Sunday's rendition, which is featured in the two photos below: 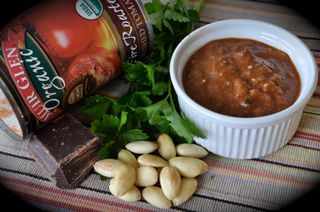 The photo1 shows some of the ingredients and a small bowl of the picada sauce. One of the beauties of this recipe is that I always get some leftover sauce to be reused (more on this really soon). (Note: the chocolate in the photo is not the one I used last Sunday.)

I followed the recipe's instructions, except for step 3, which did not apply, since the almonds and hazelnuts I had were already toasted (I rubbed the hazelnuts slightly to remove the skin) and instead of bread pieces I used my breadcrumbs. 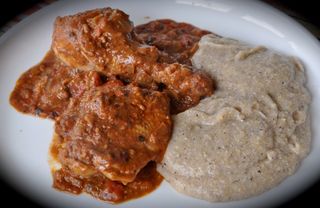 I have said it before and I say it again: this recipe is great. It pairs very well with polenta, as shown in the original post and above. Some of you may notice that the polenta in the photo has an unusual color. Indeed, while the polenta in the original post was made with a mix of cornmeal and what in local stores is sold as polenta (roughly corresponding to Italian polenta bramata, which is coarse), the one in this photo was made with a mix of cornmeal and buckwheat flour, both stone milled from locally grown grains (by Shakefork Community Farm, again). Details will be given in an upcoming post.

A few more words before I conclude. In this context, in scatola means canned (or tinned, in British English). Scatola indicates a container with a lid, so in other contexts it may be translated with "box" (for example, una scatola di cioccolatini is a box of chocolates). Beverages are packaged in lattine (singular: lattina, as in una lattina di Coca Cola). Jarred tomatoes, of which my mother would make some every year, to be used as pizza topping, are pomodori in barattolo. The word scatola is used in a number of expressions, like comperare a scatola chiusa, which means to buy something without seeing it first and checking for its quality (box unopened).

As mentioned above, this is my contribution to the March edition of Tin Can Recipes, a monthly event that will run until the end of this year. The organizers are Ale, Fra, Sere and Paola of Il Giardino degli Aromi and Brii of Briggis recept och ideer and Briiblog in English. The rules for participating are detailed on this page. You are invited to join the event with your recipe (in Italian or in English) that includes one or more canned ingredients.

1 The can of tomatoes in the photo is for information only: it is not an advertisement. I do not have a business relationship with the company referenced.

I don't use much canned food myself as well, apart from the tomatoes: living in Germany canning my own is really not an option, and anyway I understand what you mean when you say it is an almost industrial scale process. I wish I had access to roasted tinned tomatoes, they don't sell them here. What an interesting recipe you are sharing. I live with a chocolate hater but I still hope I can convert him by starting with some clever savory option.

"Organic fire-roasted crushed tomatoes" - you must be talking about Muir Glan, how I miss them!
I feel very lucky that organic tomatoes are available here in the old-fashioned tall, wide-mouthed glass bottles, alas, no fire-roasted ones.

My first Roman apartment had a storage attic accessible through a window high above the kitchen cabinets. The landlord reserved his right to have access to the dozens and dozens of vasi di vertro of pomodori San Marzano preserved by his moglie every year in late summer. ;-)

I cannot imagine life without tinned tomatoes! With them and a can of chickpeas there is always a meal on the table. This meal sounds so delicious, I must try it!

Hi Simona - I buy that brand of fire roasted tomatoes too. Quite good.
We always have canned tomatoes, canned tuna, and canned beans on hand.
Sometimes I eat canned asparagus - something left over from my mom and growing up. (It doesn't taste anything like fresh asparagus).
LL

The only thing canned I use is also tomatoes and in Greece it's just like using fresh tomatoes. My mother used to make tomato paste but I have no idea how to make it. May be it was because I did not like the smell of tomatoes when she made it. If I produced my own tomatoes I would attempt to learn how to make it.

sorry to sound repetitive but YUM!

Ciao Caffettiera. Don't let the lack of fire-roasted tomatoes stop you from trying the recipe. You can always use whole or diced regular tomatoes. And I would offer it to your chocolate hater without spilling the beans. The chocolate gives creaminess to the sauce, but there is no pronounced chocolate flavor.

Indeed, Merisi. They are excellent and I can understand missing them. Tomato preserving is a strong tradition in Italy. It's the sterilization part that really intimidates me.

You're totally right, Alicia. I will actually talk about tomatoes and chickpeas really soon.

Ciao Lori Lynn. Canned tuna will be featured soon. I have never had canned asparagus. I must say that asparagus made rare appearances on our table in Italy. After I moved to California, I started to make up for the lost time.

Ciao Ivy. Preserving tomatoes is an intense undertaking, but certainly also rewarding. I think that having good-quality canned tomatoes (regular or fire-roasted) is a bit of a deterrent. Maybe this summer I'll make a few bottles. Drying tomatoes in the sun is not really an option for me, since it is not sunny here in the summer and it is quite humid.

Ciao Paz. It is indeed yummy ;)

I use to can / bottle tomatoes in bulk.... but it's more difficult here, and, growing my own it's much easier to just pop them in the freezer in small batches. I just pulled out my last lot of frozen, chopped Roma's for dinner tonight. Bad planning, still 4 months to go! Love the recipe!

Ciao Katie. I've also frozen the small amount of pureed roasted tomatoes I had made. I like the idea of freezing chopped tomatoes. I hope summer arrives quickly. All this talking about tomatoes made me crave some fresh from the vine ones.

Simona,
green asparagus was already quite ubiquitous at Roman markets in the 80s.
It was not a bargain, but affordable enough to buy and serve as a main dish, boiled, then gratineed with parmesan and eggs sunny side up (with the egg white firm when the dish came out of the oven, the yellow still runny, forming a perfect amalgam with the melted parmesan, dunked up with pane casareccio, a delicious spring feast). Children growing up with fresh, local seasonal vegetables are so lucky, especially in Rome, where there is a bounty year round.

Asparagi alla Bismarck: according to my father, that is the only way to eat asparagus. The funny thing is that I don't remember my mother ever making them that way: she boiled them and served them with lemon juice and olive oil. We'll see if I can find some asparagus at the market tomorrow: I am afraid I am craving some now. And I love runny yolk ;)