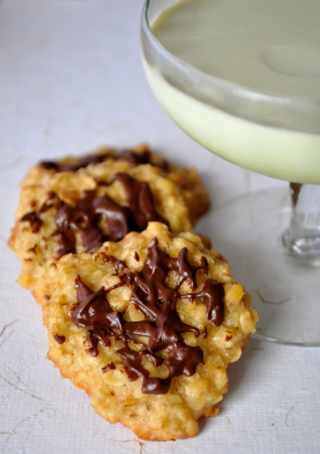 The February 2011 Daring Bakers' challenge was hosted by Mallory from A Sofa in the Kitchen. She chose to challenge everyone to make Panna Cotta from a Giada De Laurentiis recipe and Nestle Florentine Cookies.

If it weren't for the DB's challenge, I don't think I would have ever tried making panna cotta. How come?, you may ask. You are Italian, you should love panna cotta. Let me explain. Panna cotta is a dessert typical of Piemonte, a region quite far from Umbria, where I grew up — panna cotta-less, as it happens. The first time I tasted panna cotta was after I moved to Milan: I was underwhelmed, so our relationship did not develop. But I think it is important to go past first impressions and so I welcomed Mallory's choice for the challenge. The recipes she suggested for the challenge are available here.

I wanted to find a lighter recipe than the one suggested. After some roaming on the web, I landed on a recipe from Epicurious that satisfied my requirements: small quantities, less cream (panna), just a little gelatin (gelatina) and sugar, and matcha. As I recounted in a recent post, I bought some good quality matcha, so using it to make panna cotta sounded perfect. 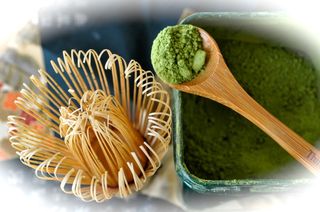 I made the recipe twice, using the observations made during the first attempt to get a prettier result the second time. The original recipe is on this page and these are the changes I made:

Sprinkle gelatin over water, making sure the grains absorb water (based on this recommendation by David Lebovitz). Heat the liquid to a fairly high temperature (though below boiling point). I used the traditional bamboo whisk, called chasen (shown in the photo above) to mix well matcha and half and half. I divided the liquid into three portions and instead of pouring it into custard cups, I used my vintage ice cream glasses, so later I didn't need to unmold the panna cotta to serve it. After the panna cotta set, I could see from the outside a bit of the matcha deposited on the bottom of the glasses. However, that did not seem to affect the flavor of the dessert.

To accompany the panna cotta and fulfill the challenge's requirements, I got tempted to make fiorentini closer to the tradition, as shown in this post (in Italian), but then decided to try the given recipe to see how the quick oats (fiocchi d'avena) would taste in this context. I divided the quantities by four, because I wanted a small number of cookies and then halved the sugar to bring the sweetness to an acceptable level. This is the list of ingredients I used:

I followed the instructions in the given recipe and obtained nine cookies, which I let cool on the baking sheet. When ready, I melted the chocolate and drizzled it on top of the cookies, then let it set.

I decided to call the cookies I made biscottini (literally, small biscotti), because they are approaching the realm of pasticcini. In Italian, the word biscotto has a different meaning from that in the US, as explained in this post. Pasticcini (singular pasticcino) are either small pastries (of which you can see an example in this photo) or rich cookies usually served as an accompaniment to tea (pasticcini da tè, of which you can see an example on this page).

I have since seen recipes for panna cotta that use agar or egg whites instead of gelatin and I am planning to try those next.

Matcha sounds great for this dessert! Great that youfound a recipe that worked better for you, as well. Your panna cotta and florentines look wonderful. Really great job on the challenge.

Matcha give to dessert an interesting flavor and also color. Thanks Ms. Clockwork Lemon ;)

Hi Shelley and thanks for the kind words.

WOW I just love your blog I feel so educated at the end of each read and I love the voice file well done. I just adore that whisk (I'm jealous a little) it looks so cute.

Cheers from Audax in Sydney Australia.

Ciao Audax and thanks for the kind words. I am glad you enjoy the audio file. I got the whisk together with the tea: it is very useful when mixing matcha.

Thanks Ivy. I like using matcha. I'll make ice cream with it again soon and then I will think about something else.

Panna cotta is on my bucket lost of things to try one of these days Simona. Glad you had such success with it.

I've never made panna cotta either and this version makes me all the more eager to try. Looks just delicious, paired so beautifully with your biscottini.

Hi Simona - we a big fans of panna cotta, love the green tea edition. And your little biscottini look adorable, this is a darling dessert.
LL

I was tempted at trying the matcha panna cotta but I went for butterscotch. I need to try this one next time.

I love the light green tint of your panna cotta, it looks so perfect paired with the biscottini. Great job!

Awesome idea to make a matcha panna cotta and the fiorentini looks delicious..so crispy and golden. I really wish I had thought of using matcha in my panna cotta, but glad you put the idea in my head :)

biscottini? i love it!

Ciao Val. I hope you try and enjoy it too.

Thanks, Claudia. It is an easy dessert. It just needs a bit of advanced planning.

Ciao Sara. Your butterscotch idea is nice too.

Thanks Dahlia. The nice thing about working with match is the lovely green color it imparts to the resulting dish.

Thanks for the kind words, Lisa.

Like the pale green to your panna cotta. Have never used matcha. Biscottini or florentines, they look delicious.