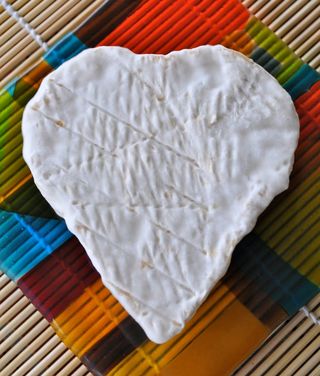 If you think cheese is just food, you're an eejit1, because it is so much more than that. It's poetry. It's passion. It's pathos.

Crisp remarks like the one above introduce each chapter of the novel Blessed Are the Cheesemakers by Sarah-Kate Lynch. The source of wisdom is Joseph Feehan (Fee) who, together with Joseph Corrigan (Corrie), makes cheese at Coolarney House (in Schillies, County Cork, Ireland) using milk from their own cows (including Princess Grace, named after Grace Kelly).

Once you've done your stirring and your waiting and your thinking and the time is right, there is a single moment, and I'm not messing with you here, there is one single moment when it all comes together and you realize that your milk is gone and your cheese is on its way.

Even after two and a half years of making cheese (fare il formaggio), the moment when I realize that milk is gone and cheese is on its way is one of the two best moments of the whole cheese-making experience. The other one being, in due time, the tasting (assaggio):

In that fantastic explosive moment when you realize just how [...] good it is, you know it's all been worth it.

Of course, you don't want to get too full of yourself after that one single moment because there's still a fair bit to be done.

Including some stumbling about, hoping for the best:

Remember, despite all the rules there really are no rules. Some of the best cheeses in the world have only been discovered by the cheesemaker making a ballyhays2 of something else.

But I don't want you to think that musing on making cheese is all there is about the book. Blessed Are the Cheesemakers is a modern fairy tale (fiaba) with a cast of colorful characters that includes, besides the elderly Corrie and Fee, Avis (an energetic woman who oversees the milking operation and the house), the milkmaids (all young, pregnant and vegetarian), Abbey (Corrie's long-lost granddaughter) and Kit (a former New York investment banker).

Abbey has escaped from a South Pacific island and her abusive husband, while Kit has been sent away from New York after losing his wife, his job and his grip on life. They both end up at Coolarney House and once there, they are expected to fall in love, marry and continue the cheese-making tradition. Easier said (by Fee) than done, due to circumstances that have to be dealt with. In the meantime, Abbey and Kit learn to make cheese.

There is a lot more about the story, especially in terms of the threads that connect the various characters and also in terms of surprises (What happened to Corrie's wife? Why does Abbey's mother want her daughter to leave immediately?). There is suspense, humor, and then there is the cheese that is made every day at Coolarney House and that requires daily care while it matures. As the cheese-making process reveals itself to the two apprentices, so do old stories, and when new events rock the boat, our heroes understand what needs to happen in their lives. I can't tell you more, can I?

Actually, there is one thing I can tell you, that I actually must tell you to explain what comes afterwards. Among the cheeses that Corrie and Fee make, there is a special one:

The Coeur de Coolarney was a secret and scarcely used weapon in the battle for love. They made one of the brie-style cheeses every year on the first of June, the day that Corrie's grandfather Joseph Corrigan had decided to propose to Corrie's grandmother Mary Roberts in 1893.

In preparation for the event, Joseph Corrigan crafted a heart-shaped mold and used it to make a mold-ripened cheese that he then shared with Mary after he had proposed to her and had been accepted. (Isn't it interesting that in this sentence, the word "mold" appears twice with two completely different meanings both related to cheese making?) 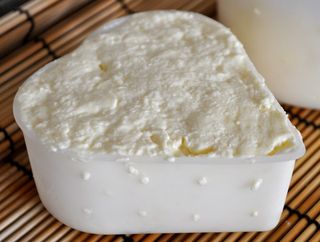 Reading about the Coeur de Coolarney steered my cheese-making path towards mold-ripened cheeses, a family of cheeses I had not yet tackled. The two most famous members of the family are Brie and Camembert. They ripen from the outside in and are characterize by a white velvety outer layer called "bloomy rind" (which is edible). Mold-ripened cheeses require attention during the draining and maturing process, with daily turning and careful monitoring of their progress.

For my first foray in mold-ripened cheese land, after securing a packet of Penicillum candidum spores, I chose French Neufchâtel cheese, because the recipe in the book 200 Easy Homemade Cheese Recipes by Debra Amrein-Boyes called for a relatively short ripening period and also because it is traditionally made into a heart-shaped mold: after all, this all started because of Coeur de Coolarney.

The very first cheese I made two and a half years ago was actually a kind of neufchâtel. In the US, neufchâtel cheese is a soft, fresh unripened cheese. It is a great beginner's cheese, as it takes only a day and a half or so between warming up and culturing the milk and tasting the finished cheese. The traditional French neufchâtel3 is a very old cheese, dating back more than a thousand years. Penicillum candidum is added to the milk when making this cheese, and the curds are drained in molds. After the bloomy rind develops, the cheese is ripened a little longer and then consumed. The adorable trait of this cheese is the traditional use of heart-shaped molds. (The photo above shows the mold shortly after being filled with curds.)

For my trial run, I used only half a gallon of milk and one of my cylindrical molds. Since the result was good, I purchased a heart-shaped mold to make the first official batch. I was so intent on doing a good job that I misread the instructions and added salt to the curds after the first half of the draining process instead of at the very end. It wasn't really a ballyhays2, but still I was a bit upset at myself. I immediately made another batch and followed the instructions properly. As a result, I had four neufchâtel cheeses maturing in a container in my fridge: two heart-shaped and two round. Inspired by the Valentine's Day spirit, I added vanilla salt (sale aromatizzato alla vaniglia) to the curds of the second batch. In caring daily for my two pairs of cheeses, I realized I started to develop a close relation with each one of them. If I let this go on for a little longer, I'll soon become a cheese whisperer. 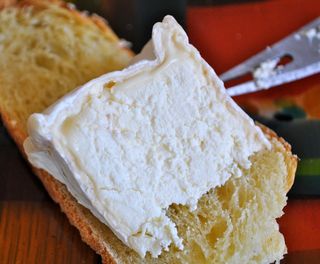 Ah, the satisfaction of cutting a slice of your own cheese and finding it really good! I shared the round Neufchâtel from batch #1 with some guests last Friday: we tasted it with slices of pear buckwheat bread. I cut the round Neufchâtel from batch #2 last Sunday, and it was difficult to stop eating piece after piece of it paired with Finnish rye bread (enriched with flaxseed). For the photo-op above I paired the cheese with a slice of my homemade challah. The result was worth every minute of my time, every moment of worry, every turning of the cheeses, and all the sweet words I whispered to them.

A heart-shaped cheese (formaggio a forma di cuore) is a perfect way to celebrate the love story described in Blessed Are the Cheesemaker. It is not only the love between Abbey and Kit, but also the love of Corrie for his granddaughter, and of the two lifelong friends (Corrie and Fee) for each other. (There are two other couples in the story, but I won't reveal their composition here.) Love makes a difference in the life of all the characters. Love was what was missing in the first marriage of both Abbey and Kit. Love produces good milk and makes good cheese. But love, as good cheese, needs to be nurtured and taken care of, otherwise it spoils.

Many thanks to Cynthia of The Smiling Eggplant for suggesting to me this book. I really enjoyed it, with the joy of a child reading a fairy tale and of an adult enchanted by cheese making. Learning that the author is a New Zealander added to my delight: my visit to her country is one of the best memories of my life. I have a few photos from that trip on this page. (The album may take a bit to load, but if you are patient, you'll see some nice images of a beautiful country and of adorable penguins.) 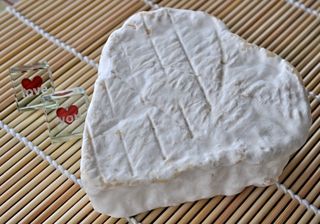 This is my contribution to the 12th edition of Novel Food, the literary/culinary event that Lisa of Champaign Taste and I have been co-hosting for some time. It all started from a conversation on the food in the Montalbano's novels, which gave us the idea of marrying literature and food in a blog event.

or launch the neufchâtel fatto in casa audio file [mp3].

You do have "pathos" for everything you make Simona and the cheese looks amazing. Where do you find time to make cheese, cook, blog, etc., and read novels?

The book sounds so lovely! And your cheese looks perfect. I have bought Paul a heart-shaped cheese for Valentine's Day again this year!

Your cheese is impressive, and "Blessed Are The Cheesemakers" sounds like a delightful story. :)

Ciao Paz and thanks for the kind words. The book makes a truly pleasant read.

Ciao Ivy. I guess all those things, plus my day job and a few others make for long days. Mostly they are fun, though, which gives me the energy to keep going. I read for at least half an hour every evening, no matter how late it is: otherwise I can't sleep.

Ciao Alicia. I remember your heart-shaped cheese from last year! I hope you'll give this cheese a try: it's quite satisfying.

Thanks, Adele. The story is indeed delightful.

I just found out your blog, how could I miss it for so long?!? I am truly impressed, my home-made cheese experiments have put me off from trying any further. The novel sounds exactly like the kind of novel I'd like to read now, thanks for the suggestion.

Ciao and welcome to briciole, Caffettiera. I am glad you enjoyed your visit. What happened with your cheese-making experiments? I have had a couple of mishaps, too, but after the initial upset, I focused on the good results. The novel is a fun read: I hope you'll enjoy it.

A lovely post on your foray into learning to make cheese and a beautiful review of "Blessed are the Cheesemakers".