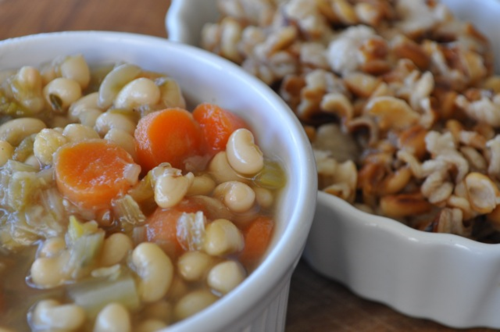 This tiny, oval bean,... exists in colors ranging from ivory white to salmon pink to brown to black. Soft, buttery and flavourful...

Growing fagiolina is a long, hard and all-manual process. Together with roveja, fagiolina del Trasimeno is a precious product from my home region that not long ago ran the risk of disappearing. Where roveja has a kind of simple, rustic beauty, fagiolina is rather dainty, with a smooth skin of pastel color (when not elegant black)1. The two legumes remind me of the two main characters of The Aristocats (Gli aristogatti): roveja (on the left in the photo below) is Thomas O'Malley (Romeo, "er mejo der Colosseo," as he says in the Italian version of the movie, declaring in both words and accent that he is from Roma2), and fagiolina (on the right) is Duchess (Duchessa).

Following the Italian tradition, I made lenticchie di Castelluccio for New Year's Day (for being such a small region, Umbria certainly produces some important legumi) and I thought about sharing that recipe, but then I got sidetracked by the idea of adapting the recipe for Vegetarian Cassoulet to use fagiolina. My enthusiasm for the latter recipe was described in a recent post, where I talked about the three renditions of it that I made.

The thought that the delicate flavor of fagiolina would go well with that of the vegetables and aromatics called for by the recipe set in motion the fourth realization. Fagiolina does not need to be soaked before being cooked, and I decided to cook it with the vegetables, so I increased the amount of liquid with the idea of turning the dish into a soup. To make all this clear, here is the list of ingredients I used:

I followed the instructions given in the original recipe, with these changes:

I ate the soup as is, while my husband's portion included a serving of toasted and cooked hulless oats (in the photo, you can see the oats before being added to the soup). As usual with me, the soup was rather thick, a feature that can be adjusted by adding water to reach the desired density. I really liked the result: the vegetable medley complements well the flavor and texture of fagiolina, a legume that is indeed "tenero, burroso e particolarmente saporito" (soft, buttery and flavorful).

1 The fagiolina I have used so far was ivory in color, but I have a package of fagiolina of varied colors that I will use in a future recipe. Update: in this post there are some images of fagiolina and another recipe for it.

3I had neglected to specify that the stock was diluted a bit, and added it after publishing the post: apologies to the early readers.

This is my submission for My Legume Love Affair 31, the current edition of the popular, legume-centered event created by Susan, The Well-Seasoned Cook, and hosted this month by Simona of briciole (that would be me). This post contains links to the two-part roundup of the event.

This is also my submission for Souper (Soup, Salad & Sammies) Sundays, a weekly event created by Deb of Kahakai Kitchen. This post contains the roundup of the event.

2 I hope you'll enjoy watching the video: I have written down the first couple of sentences and the translation.

Pe' arrivacce qui da Roma ho fatto l'autostop, e in Francia è già 'n ber pezzo che ce sto. Ma pure da emigrato, mica so' cambiato: io so' Romeo, er mejo der Colosseo.
To get here from Rome I hitched a hike, and I have been in France for a while, but even as an emigrant, I haven't changed: I am Romeo, the best of the Colosseum.

This is a wonderful comfort dish for us Greeks as we make it in a similar way and we eat it at least once a week. I have not seen these colourful ones though and look forward to see what you will prepare.

I love what a pretty dish this is and it sounds hearty and delicious too. Thank you for sending it to Souper Sundays--it is always a pleasure to have you join in. ;-)

What fun, watching the Aristocats in Italian! That was great. And your veggie cassoulet sounds so comforting and nutritious.

Ciao Ivy. This is indeed comfort food that is also very good for you.

Thanks, Deb. It is always a pleasure to participate.

Ciao Lisa. I have always had a soft spot for that Disney movie. Also 101 Dalmatians: I will find a way to feature that in a future post.

Ciao Johanna and thanks for your words. I freeze the cobs if I don't make stock right away.

Your recipe looks so much easier and tastier than the adaptation of that vegetarian cassoulet I made yesterday. I wasn't too pleased with my results, but I know I would like your soup.

And the video is adorable - couldn't understand much of a word of it, so I'm going to go check out the English version. I have a soft spot for Disney, too, but I don't think I ever saw "The Aristocats." How could that be? ; )

Ciao Susan. I am sorry you were not happy with the result you obtained. I hope you'll give the recipe another chance. When it's cold and snowy outside, there is nothing better than watch a nice Disney movie like the Aristocats. My husband hasn't seen it either, so I'll be watching the original soon.