As a long time reader of Food Blogga, I am familiar with Susan's style: her posts include always interesting recipes, they are infused with her sense of humor, and are peppered with bits of family life. The sense of humor that I relish on her blog, infuses also the book Recipes Every Man Should Know, which Susan co-authored with Brett Cohen, and which was recently published by Quirk Books (on the web at Irreference.com).

The title of the book clearly defines its intended audience. From the Introduction:

I must admit that I had never thought about the topic from that perspective. Again, from the Introduction:

This little black book is full of the basic recipes and techniques to get you started in the kitchen... We tell you which pots and pans to buy, what's the difference between slicing and dicing, and how many pints are in a quart. (Two.)
[...]
Basically, this book has got your back. Plus, it's small enough to fit into your back pocket...

That is the first characteristic of the book that I noticed, together with the elegant black cover and the overall nice graphic design (see an example in the photo below). I think these are all important elements of a book: they make you want to hold it in your hands, open it and read it, and they contribute to the experience provided by the book contents —which is, of course, important.

After preparing the ground in the sections called Kitchen Tools and Cooking Terms, the authors organized the recipes into the following groups: 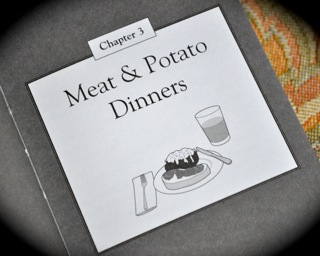 Choosing sample bites from the book is not easy. I like how the authors present three options for cooking fish (panfried, baked and super-healthy) plus three topping suggestions (piccata-style, salsa and California-style) in three pages (83-85). The number three recurs in the section on meat marinades (teriyaki, fresh herb and Cajun), where one learns that a marinade needs an acid and an emulsifier.

A year ago, Susan wrote a piece for NPR's Kitchen Window called Bacon Gets Its Just Desserts. Bacon is featured in several recipes in the book, including Bacon-Wrapped Meatloaf, recently presented by Susan on her blog. I was intrigued by the recipe for Greens and Bacon:

Salty, smoky bacon balances the bitterness of greens, making them go down much more easily.

The recipe headnote ends with this quote:

Life expectancy would grow by leaps and bounds if green vegetables smelled as good as bacon. — Doug Larson

Some recipes have reassuring titles, like Fool-Proof French Toast, Quick-and-Easy Quesadillas, and some include variations, which allow the target user to expand his repertoire.

The first word that came to my mind after going through the book is simpatico, which means nice, pleasant, agreeable, and also fun. The book sets a goal and delivers to its intended audience based on that goal. It does so efficiently and with a pleasant sense of humor — a fundamental ingredient of life.

Going back to the beginning (i.e., the Introduction) before I end, I agree with another of the reasons given for why men should cook:

4. Home cooking is cheaper than eating out, which means more money for other stuff.

I think that men who follow the instructions and recipes in Recipes Every Man Should Know1 will also find out that cooking is a pleasant activity: it is divertente (fun).

Another fun thing is to participate in a giveaway. Leave a comment on this post to be included in a random drawing to receive a copy of Recipes Every Man Should Know by Susan Russo and Brett Cohen. The deadline is December 7 and the winner is the 6th person to comment, that is: Sweet Artichoke. Congratulations!

FTC disclosure: I have received two free copies of the book from the publisher, one of which I am giving away. I have not and will not receive any monetary compensation for the review contained in this post.

Posted by Simona Carini on December 01, 2010 in Books | Permalink

Ohh, I would love to win this, as most of the men in my life are meat and potato guys lol Plus, it was be nice if they cooked more for themselves

oh what a cool idea for a recipe book! i would love to win this!

Kudos to Susan and Brett Cohen for such a smart theme and to you for such a lovely review.

Ciao Lisa. You'll be included in the drawing.

Hi Natalia. You'll also be included in the drawing.

Heehee, that sounds like the perfect present for my Mr Artichoke!! ;-)

Well, well, well. It looks like Mr Artichoke is the lucky guy who will get the book as a gift with a wink ;)