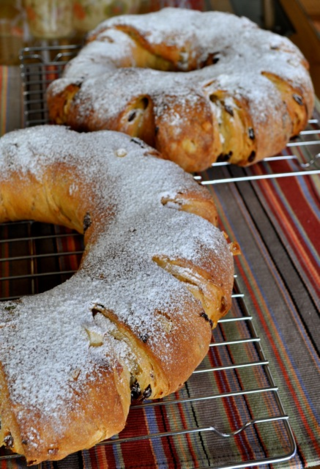 The 2010 December Daring Bakers’ challenge was hosted by Penny of Sweet Sadie’s Baking. She chose to challenge Daring Bakers to make Stollen. She adapted a friend’s family recipe and combined it with information from friends, techniques from Peter Reinhart’s book... and Martha Stewart’s demonstration.

The recipe Penny provided for the challenge can be found on this page.

The second week of December, we visited my father-in-law and his wife in Atlanta. My father-in-law loves challah, so I made a five-braid one the day before we left and brought it with us (the recipe I use is in Peter Reinhart's Artisan Breads Every Day). Once we got there, I thought: why not making a Stollen for them as a gift?

I made Stollen twice during our visit. The first time, I baked one big wreath, while the second time, I made two smaller ones and I liked the result better. I brought one back to California, so I know that Stollen travels comfortably in a backpack.

While we consumed it (it really keeps quite well and the last piece makes an excellent performance in French toast), I planned to make Stollen for the third time. I had some candied orange peel (scorze d'arancia candite) left over from the first two Stollen-making sessions, but since it was not enough, I got some candied citron (scorze di cedro candite) . I also used up some candied peel I had made some time ago, so, if I plan a bit ahead, I don't really need a supplier.

I followed the recipe provided by Penny, with just a couple of adjustments:

The recipe worked out nicely. After the dough had spent a night in the fridge and then a couple of hours at room temperature, I divided it into two equal pieces and rolled each one into a rectangle, whose longest side was just over 16 inches. I rolled it and shaped it into a wreath (ghirlanda) as shown in the recipe, using a tea mug in the hollow center to keep the shape.

After the required proofing time, I baked the two Stollen together (on two baking sheets). At home, I  used the convection bake option of my oven (which does the temperature adjustment automatically). After 20 minutes, I turned the baking sheet 180 degrees, as per the recipe, and baked the Stollen for another 15 minutes, at which point I checked their internal temperature and since it was 190 F, I stopped the baking. I slid the Stollen on wire racks (that's the photo above), sprinkled powdered sugar on them twice, and let them cool. 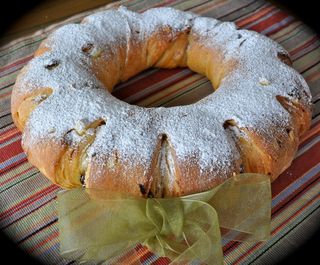 We tasted one at the end of dinner and I packaged the other as a gift (Penny, I am afraid my packaging was not very creative, but I am a notoriously bad packager, plus I knew that the Stollen would have to travel, so practical considerations prevailed over aesthetic ones). 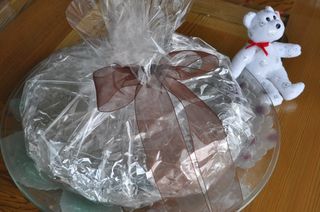 Making Stollen was fun, and I was completely satisfied with the result of my efforts. I liked the delicacy of each flavor and the overall balance of the ensemble. The combination of raisins and candied orange and citron peel reminded me of my favorite Holiday treat, panettone (nostalgic sigh!).

May the Season Bring You Peace and Joy

Your stollen looks beautiful Simona. I was planning to make one this year but I've made enough desserts for this month, so I'll leave it for next year.
My best wishes for Happy Holidays and may the new year fulfill all your dreams.

Those are so pretty! I'm so impressed by your baking ability. And the description -- I can almost taste that bread. I, too, love panettone, by the way. But I don't think I'll ever attempt to make one!

Merry Christmas, Simona, and I wish you all good things in the coming year.

Beautiful stollen! I also liked the stollen made into smaller loaves (and I also made challah!). Happy holidays!

Being a fan of Stollen and Xmas, that round of Daring Bakers is perfect for me.
You chose a great way to present it.
Merry Xmas

Where is stollen from, Simona?

Looks delicious wherever it's from! :-)

That is a beautiful Stollen, Simona. Your photos make it look positively mouth watering.

Thanks, Ivy. I was indeed, very pleased with the results. I hope you and your family have a peaceful and joyful time during the Holidays.

Ciao Lisa and thanks. The dough was actually very well behaved (and it smells really good too). Happy Holidays to you!

Ciao Laura. Wow! It looks like we were on the same wavelength. The smaller size was definitely better, and also easier to handle.

Grazie, Rossella. I am glad you liked what I did. I am now also a fan of Stollen.

Thanks, Christine. I think that Stollen is photogenic.

Your stollens are beautiful. I like that you made 2 instead of just one. I think mine would have turned out better if I had done that.

Toasted stollen spread with soft brie is one of my Christmas treats. This year I decided to make my own... and all the ingredients are still in the pantry! But I will do it before I go back to work!

Beautiful! I wondered if the two smaller wreaths would work better - but, of course, I waited until far too late in the month to even make my first one! :)

Your Stollen looks beautiful! I made one small wreath and the size was just perfect. Peter Reinhart's Challah is also one of my favorite recipes. Sounds like your family was lucky enough to enjoy lots of home-baked treats! Happy Holidays!

Hi Leslie. Maybe you'll make another Stollen before the Holidays are over... ;)

Ciao Alicia. That sounds great. I have not yet tried to make brie at home: I am a bit intimidated. I hope you make your Stollen. Yesterday I actually made yet another one, using a slightly different recipe. I like that it keeps for a while. Buon Anno!

Hi Michelle. By making two wreath it was easier to handle the dough and I think the yeast worked better. The Holidays are not over so you could make another one...

Hi Jeanne. I think that edible gifts are the way to go: people enjoy them and they appreciate the love that went into making them. Happy Holidays to you!

Your stollen are so beautiful!!!
I'm sure it was an amazing gift!
Happy Holidays!

Thanks, Manoela. I am quite happy with the way they turned out. Happy Holidays to you too!

What a beautiful stollen! I imagine it was a thrill to the lucky recipients.

Your stollen turned out wonderful! I too enjoyed this challenge :)

Thanks Leslie. They were very appreciative.

Thanks Jimena. It was indeed a fun challenge.