Dave and Linda from Monkeyshines in the Kitchen chose Soufflés as our November 2010 Daring Cooks’ Challenge! Dave and Linda provided two of their own delicious recipes plus a sinfully decadent chocolate soufflé recipe adapted from Gordon Ramsay’s recipe found at the BBC Good Food website.

You can find information on soufflés, details about the challenge and the recipes provided on this page. Dave and Linda asked us to "make a baked soufflé using any one of the recipes provided or any other soufflé recipe that looks interesting and tasty."  Veteran soufflé makers were asked "to make a soufflé never attempted  before." I am no veteran soufflé maker, but I have developed a recipe for zucchini and carrot soufflé that I have been making for a few years. The challenge explicitly asked me not to present that, so I chose another recipe.

Much as the "sinfully decadent chocolate soufflé" appealed to my chocolate-lover self, I wanted to make a savory soufflé, preferably with a good amount of cheese. This is because cheese soufflé was the one soufflé I grew up eating. My mother would use grated Emmental for it. The soufflé al formaggio was always welcome as a menu option.

The day appointed for making soufflé, I bought some fresh spinach leaves at the farmers' market, about 1/3 of a pound (150 g). I didn't have a specific reason for the purchase, but I thought that spinach would be a nice soufflé ingredient. I found the recipe that answered my requirements in my beloved Vegetarian Cooking for Everyone by Deborah Madison: the variation with Spinach of Goat Cheese Soufflé with Thyme. For my zucchini and carrot soufflé, I usually preare a velouté sauce instead of a bechamel sauce. I did the same for this soufflé using:

The stock is already flavored with vegetables and herbs, so I skip the step of the recipe that describes flavoring the milk. I let the flour cook in the olive oil for several minutes, then slowly add the hot stock, stirring constantly. Bring back to a boil, then lower the heat and cook for 10 minutes or so, stirring often. The resulting sauce is thick and velvety. Finally, season it with salt and freshly ground pepper.

For the cheese, I decided to use some of my homemade Gouda (made with mostly cow milk, but also a bit of goat milk) and some of the grateable blue-veined cheese that I showed in this post, and also some locally produced mixed mold, soft-ripened goat milk cheese: Cypress Grove's Lil' Ziggy. I grated a total of half a cup of the homemade cheeses and cut into small pieces half of a Lil' Ziggy. Here's a photo of the remaining half of the ziggurat-shaped cheese. Every now and then it is important for me to look at and taste professionally made cheese. In the photo, you can see the layers of this cheese. I am well aware that I have a long way to go.

To the base mixture of velouté sauce, four egg yolks (tuorli) and cheeses, I added the spinach leaves, cooked with the water clinging to them until tender, then finely chopped and seasoned with salt, freshly ground pepper, and a pinch of grated nutmeg (noce moscata). I beat six egg whites (albumi) and folded them into the base, and baked the soufflé according to the original recipe. 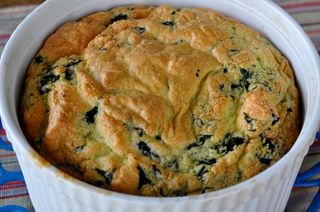 Instead of the specified 6-cup soufflé dish, I used my 8-cup one, which explains why my soufflé did not go overboard. I guess the soufflé does not look as impressive as expected when all contained within the confines of the dish. I am actually quite content, because, while there was not a lot of going up and coming down, the soufflé delivered in terms of texture and flavor. When I prepare this recipe again, I will squeeze the spinach better, as I suspect that a bit of extra liquid from the vegetables may have affected the rising of the soufflé. I have some Red Russian kale growing in my small vegetable garden, so I probably will try using tender leaves of that vegetable.

Update — My suspicion was accurate, as proved by the result of my second realization of the same recipe. Instead of spinach, I used some Red Russian kale from my little garden, ribs removed and cut into 1/2"-ribbons, then cooked in a pan with the water clinging to it until tender, then seasoned as detailed above for the spinach. The cooked kale was quite dry, so I added it to the other ingredients as is. 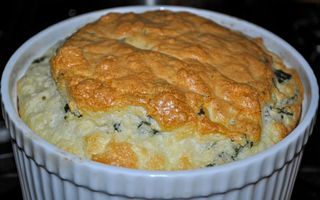 Voilà! (And actually, by the time I set the camera properly to take the photo, the soufflé had already collapsed a bit. It was excellent.)

I don't didn't like to end my post with a so-so photo, hence I will shared an image I took back in September, of the full moon (luna piena) about to set on a truly Pacific ocean. 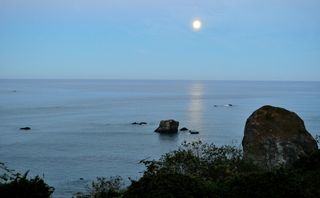 You will see many variations of the theme of soufflé, when you browse the creations of my fellow Daring Cooks. A special thank to Dave and Linda for an interesting and fun challenge.

My goodness, Simona, the photo of the luna piena is amazing! Is that far from where you live?

Souffles have always been a challenge for me but iy never stops me from experimenting. Love the favours here.

Ciao Jeremy. I am glad you like the photo. As you know, the Pacific ocean can be very calm, and it can also be very stormy. That morning, I was lucky and was able to capture the moon reflection on the surface.

Ciao Val. They are a challenge, but they offer a nice reward.

Hi Simona! I bet it tasted awesome.
Love the luna piena (and learning a new word that I will remember!)
LL

Gorgeous souffle! It sounds and looks delicious & I love that you used homemade cheese.

That's a beautiful photo of the moon over the Pacific. :)

Oh! A savory soufflé! I love it! This looks really good. And I love that moon photo. I love photos of the moon.

Your soufflé looks so good, I'd love to steal it from your blog!
Contrary to your opinion, I find that the image is a very good one,
transporting the idea of a perfectly baked soufflé beautifully. ;-)

The variety of cheeses you are producing is amazing. If I lived near you, I'd beg you to invite me for a tasting!

Wow this is called souffle with a difference...It does look good as well as opposed to your thoughts

Beautiful! Well done. It is so hard to beat a lovely light fluffy cheesey souffle.

Ciao Lori Lynn. It was, indeed, very good, so I will certainly make it again.

Ciao Paz. I am glad you like the photo. It was one of those special moments, all the more appreciated because unexpected.

Ciao Merisi and thanks for the kind words. You are welcome to visit any time. What cheese will be available for tasting then will be a surprise. I am still exploring the world of cheese, so I am not planning in advance.

Ciao Foddycat. I agree, it is not easy. However, when the outcome is nice, one forgets the attending anxiety.

I love spinach - esp. souffles. I may even try this one. I'm not overly particular about appearances (and my souffle record is sad). It's the taste that counts and this sounds perfect!

I agree with you, Katie: it's the taste that counts (which made me think of an Italian saying about looks that I will share on the blog soon).