una storia a lieto fine / a story with a happy ending 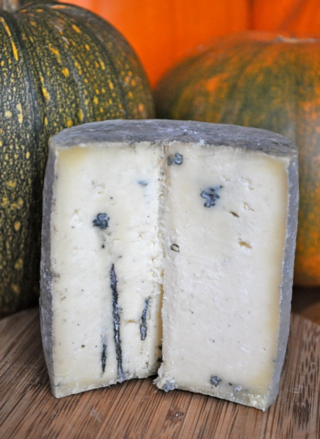 Most of my homemade cheeses age in what I call my cheese fridge, a mini refrigerator rigged to maintain a temperature of 50 F, a rough approximation of what would be the ideal place, namely a cheese cave. As of this writing, my cheese fridge is nearing retirement, after about 16 months of honorable service, but I'll have more on this in a future post.

The story of the title has, of course, a sad beginning. In a recent post, I wrote about my positive experience making my first blue-veined cheese: Fourme d'Ambert. A positive experience is worth repeating, so one day, last month, I started making Fourme d'Ambert again. At the same time, I started the oven's clean cycle, where the oven heats to very high temperature for 2 to 4 hours.

After warming up the milk (latte) to the required temperature (in a stainless steel stock pot) and adding culture, mold, calcium chloride and rennet according to the recipe, I let the milk ripen and set on the stove, as I always do. By the time I realized that the heat from the oven was warming up the stove top and therefore warming up the milk, the damage had already being done in the form of a higher than required temperature inside the pot. Not only had the milk coagulated, but the curd had also started to expel whey (siero di latte), something that should not happen at this stage.

I wanted to cry, and the first impulse was to empty the pot in the sink. I was able to restrain myself and after cooling the pot in a cold water bath, I decided to proceed with the cheese-making process. I had already resigned myself to the distasteful idea of throwing away everything, so why not follow the development of my mistake to see the consequences on my finished product? Unfortunately, I failed to note the temperature of the curd at the time I realized my mistake, and this was another mistake, as I will explain later. So, I continued with the recipe for making Fourme d'Ambert (from the book 200 Easy Homemade Cheese Recipes by Debra Amrein-Boyes). The cheese that came out of the press and was then processed further (as explained in this post) was clearly firmer and drier than it should have been. In the following days, I noticed that surface mold developed on it faster than in my previous experience. No matter, I plowed on. 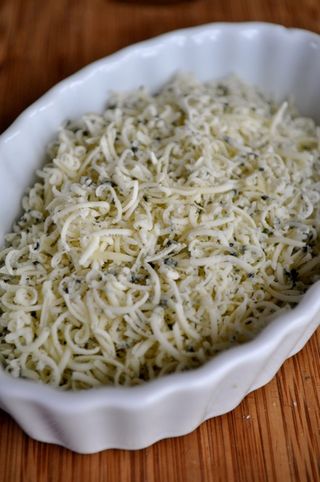 A few days ago, after a month of aging, it was time to cut the aborted Fourme d'Ambert and see what had happened inside. The cheese was firm, as expected, and inside it showed blue veins, a positive note. The flavor, while not earth-shattering, was umstakeably that of a blue cheese. However, it wasn't until I cut a second slice that the unintended consequence of my blunder made itself clear to me in all its beauty: what I had was a blue-veined cheese firm enough to be grated.

I immediately put to the test my hunch in the realization of a beloved recipe: zucca ripiena (stuffed acorn squash). Peter of Kalofagas commented on that post with a suggestion of adding some gorgonzola to top the filling (ripieno). I have since followed the gist of his advice and added various kinds of cheese to the filling. When I use firm cheese, I grate some and create with it a layer covering the squash cavity, then put the rest of the filling on it. I did the same with my firm blue cheese and the result was excellent.

The following evening, grated blue-veined cheese went to top a soup that I will describe in a future post, and our guests, Christine of Christine Cooks and her husband, joined me in my appreciation of the new product.

The big cloud in the sky is that not having noted the temperature reached by the curd when I realized that it was warmer than it should have been, I don't have a reference to guide future experiments. Serendipity has some limitations. I am coming up with other ideas on how to use this unplanned-for product of my home cheese-making facility, available in very-limited quantity and probably only this one time. [Update: I have discovered that in my cheese-making book (referenced above), there is a recipe for Septmoncel (or Bleu de Septmoncel), a semi-hard blue-veined cheese. That is certainly a recipe I will try soon.]

Before I end, I am sharing the link to a web site I discovered recently: If you are interested in reading about the steps involved in making cheese, the Cheese in Depth series on the Cheese Chick web site is a very nice resource. This and other resources related to making cheese at home are available on Making Cheese at Home page on this blog.

Posted by Simona Carini on October 26, 2010 in Cheese making | Permalink

Good story, you had me wondering what was the happy ending. The cheese looks awesome.
LL

Wow!! how utterly impressive. Making my own cheese is definately on my "bucket list". Good on you

Ciao Lori Lynn. I am so happy with the result, I had to share the story. I also wanted to show that my adventures making cheese at home are not always plain sailing.

Simona, it's always a pleasure to read your post, learn something new and always leave hungry. Thank you for the kind mention!

Simona, You are amazing! I would love to raid your cheese fridge!

Beautiful! Good on you for not just throwing the curds away!

Thanks, Peter, for the kind words. I like to give credit where credit is due.

Ciao Marie. Right now there are four cheeses aging in my new fridge. Two of them are definitely not ready, but you could take the other two.

Ciao Foodycat. I was very upset and came very close to do it. Fortunately, I regained my balance before doing something that could not be undone.

So glad you had a serendipitous outcome -- and I think you'll remember to check any temperature deviations and note them down next time.

How inspiring to see you make your own cheese!

Dear Lindsay, I hope I will remember. I must admit I am not good at taking notes in general. Making cheese is very rewarding.

This cheese was indeed delicious and the small bits of blue in the grated pieces gave it wonderful character as well. Mr. CC and I are happy indeed to share Simona's table!

Grazie Christine. I will try making it again. In the meantime, I hope to make some fresh cheese for Thanksgiving. We'll see if I manage.