(one of an infinite number of possible variations) 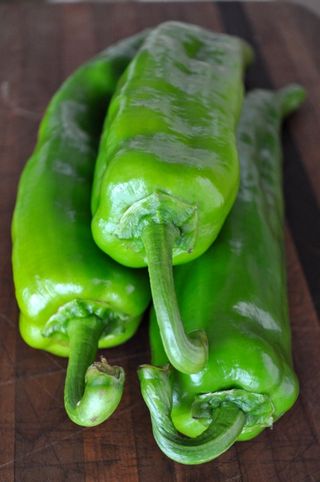 Yesterday morning, I purchased four peppers called Italian long from a farmer that grows a wide range of pepper varieties. I tried his Italian peppers for the first time last year, as a result of a recommendation from my friend Christine of Christine Cooks, and I became instantly a fan. On this page, you will find some details about these peppers.

I must admit that I am not adventurous in the pepper area, so I tend to stay within the sweet camp. One thing that has always amazed me about peppers is that you can't tell whether they are sweet or hot, and if so, how hot, by their shape or color.

Preparing sweet peppers for me means oven-roasting them, and yesterday, after roasting the beauties you see in the photo (there was also another one), I decided to use them in a recipe I created some time ago, which uses bell peppers. First, I will give the original recipe, then will add some comments on my most recent realization of it. This can be called the recipe of 2's.

Heat the oven to 375 F. Line a baking pan with foil and place the bell pepper quarters in it, skin side up. Roast them for 30 minutes or so. Place the roasted peppers inside a paper bag and put the bag on a plate. When cool, remove the skin from the pepper strips and spread them on a plate, skin side down. In the meantime, put all the ingredients for the filling into a small bowl, add the olive oil, salt and pepper and mix well. Place a tablespoon of filling at one end of each bell pepper strip and make a roll. Place all the rolls in an oiled frying pan and warm up on low until heated through. Serve immediately. The photo above shows a realization of the original recipe. The first departures from it was that I roasted the 4 Italian peppers whole, so the roasting phase took longer than 30 minutes. When ready, I placed the peppers in a plastic container, put the lid on, and let them cool. It was then very easy to remove the seeds (pulling the stem extracts the inner membrane and most of the seeds) and the skin. Given the shape of the peppers, from each one I obtained two strips wide enough for the involtini. (In two cases I also obtained a narrower strip that I set aside for another use, which I will describe in a future post.) Another, small, departure was the use of toasted walnuts instead of pecans. 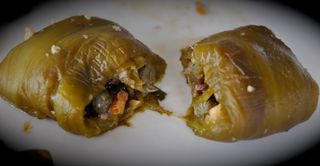 By then, it was clear to me that, Italian peppers being thinner than bell peppers, the rolling up would require a more delicate hand. Given their length, though — and the specimens I bought were large representative of the variety — each involtino still was thick enough to hold the filling (ripieno), as you can see in the photo above. By the way, the word involtino comes from involto (bundle): literally, it means small bundle.

The final departure from the original recipe was the placing of a thin slice of my homemade Wensleydale cheese on the top of two of the involtini, as shown in the photo. The result is an interesting variation. The head of my Quality Assurance department (a.k.a., my husband) liked the involtini and would not declare a preference between the variation with cheese and the one without it, opting for a non-committal "They are different," which I have learned to interpret as meaning "I'll eat either of them any time."

This is my contribution to edition #253 of Weekend Herb Blogging, an event started by Kalyn of Kalyn's Kitchen, now organized by Haalo of Cook (almost) Anything at Least Once and hosted this week by me, Simona of briciole.

I'm not a sweet person at all. Gimme my spice!! I LOVE this dish, even though it probably isn't as spicy as how I like my peppers. I'm fascinated by the use of raisins and capers in there!

Your involtini looks great - like the twist of the cheese on top! Your hubby sounds a lot like mine - he's happy with whatever he gets as long as it's edible. Hehe.

What a wonderful addition to weekend herb blogging. ;-)

Hi Sophia. It would be quite interesting to see how the filling would work in a spicier wrapper. The raisin and caper combination was inspired by caponata di melanzane.

Thanks, Marisa. My husband is my trusted taster. In this case, he gave thumbs up.

Thanks Frank. I know, there is not much time left to enjoy peppers, tomatoes and other summer produce. So, I say, "carpe diem"