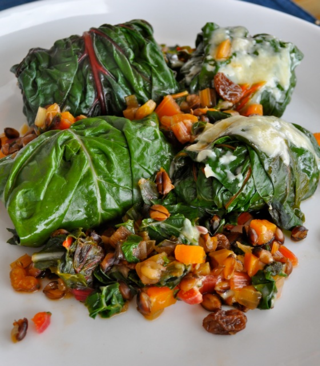 I ♥ colored varieties of Swiss chard (the Italian word for chard is bietola, plural bietole, also called bieta). When I bought the leaf in the photo and its companions at the farmers' market, my intent was to make involtini with them. I guess I am in an involtini phase (see my recent post on involtini di peperoni). 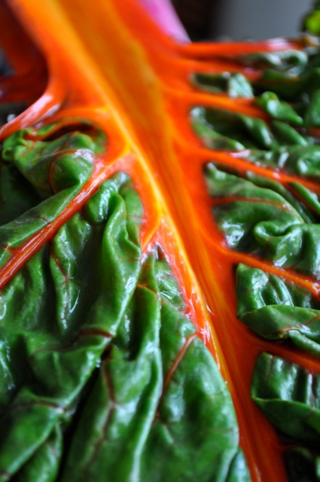 To make sure I prepared the chard leaves properly, I turned to my main resource in the kitchen, "Vegetarian Cooking for Everyone" by Deborah Madison, where in fact I found an explanation of how to prepare the leaves as part of the recipe for Chard Rolls with Winter Vegetables. From that recipe I took also the idea of chopping the chard stalks and central ribs that were cut off to make the leaves rollable and add them to the filling (ripieno). As I have written in a recent post, I like chard stalks (coste) a lot.

As part of the filling, I decided to use hulless barley, of which I have a steady supply as part of my grain CSA share. I cooked half a cup of barley the way I described in this recent post, then took half of it and added it to the other ingredients of the filling at the end. But I am getting ahead of myself.

Note: The bunch of rainbow chard I bought at the farmers' market had short stalks, which I cut, and also cut a couple of inches of the central rib, so that I could later roll the cooked leaf easily. The result is a heart-shaped leaf of sort.

I boiled the chard leaves for four minutes, in two batches to avoid overcrowding the pot, drained and spread them on a towel. They certainly require a bit of care in handling. 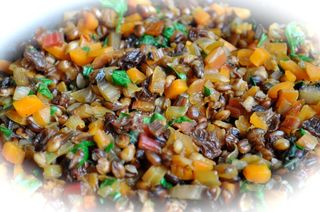 Assembling the involtini and finishing the dish:

Both versions of the involtini were excellent. I particularly like that the filling makes also the accompaniment. I am also happy about the way the dish looks: I think the photo speaks by itself.

This is my contribution to edition #255 of Weekend Herb Blogging, an event started by Kalyn of Kalyn's Kitchen, now organized by Haalo of Cook (almost) Anything at Least Once and hosted this week by Prof. Kitty of The Cabinet of Prof. Kitty. 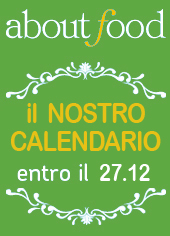 Update: I am submitting the first photo of this post to a special end-of-the-year contest currently ongoing at the about food site (in Italian). Twelve photos will be chosen by about food editors and they will be featured in their calendar.

I think this sounds delicious, and I still have chard in my garden! Bookmarked.

Wow nice presentation and a new dish added to my recipe dairy!

A gorgeous dish indeed. I have some chard in the garden and will definitely try this with rice or quinoa (barley is no good on a gluten-free diet, alas) soon. Bellissima!

This is such a colourful dish Simona. I have seen rainbow chard at the market and would love to try these rolls.

My daughter always buys rainbow chard, and this I will forward to her...she makes it so delish, but your way is magnificent! Thank you for visiting my blog, and commenting.
Grazie per la ricetta!
Ciao

Hi Simona! Boy do those look awesome! Love the sound of that filling! Great photos too.
LL

This recipe looks so delicious. I want to try it for lunch. I think this is going to be a hit at home. Thanks for sharing.

Thanks, Lori Lynn. Very healthy too.

The picture of the chard with its blood red veins is beautifully photographed and the little rolls a definite addition to my collection of yummy meals.

Thank you so much, Nazarina, for your kind words.

This looks perfect. I love the idea of using the stalks instead of throwing them away. Chard is so versatile - I too love the color.

Gorgeous! I love stuffing vegetables and my chard all grew back - not rainbow, but still tasty!

Thanks, Claudia. Indeed, chard can be used in so many ways. I am glad it is easy to find year round.

Hi Katie. I wish I had chard in my garden. I tried growing it one year, but the results were not very good, so I am sticking to kale, which does very well.

The colors and photos are beautiful, and this recipes sounds delicious!

Thanks, Jeannette. I was definitely happy with the result.

Waow, I have never seen these rainbow Swiss chards! And I am an avid hunter for new kind of veggies! Will still try your recipe with regular ones... ;-)

Hi Sweet Artichoke. You can certainly use regular Swiss chard. Based on other people's comments, I suspect rainbow chard is available only in the US, at least for now.

I am going to try to leave a comment again, using Mozilla instead of Google Chrome (yes, I filled all three fields, and even signed up with Typepad to try it that way).
I love, love, love your involtini. Cannot have enough recipes for chard. It is always pushed aside as a "contorno", but you made it into a star:)

Hi Lana. Thank you so much for trying again. I am glad this time you were successful. Thanks for the kind words. I think it is so nice that card is available pretty much year round. You are totally right: in this dish it takes a well-deserved central place.