Last Sunday, for a dinner with friends, I prepared three soups. One of them was the result of my first attempt at cooking dried fava beans (fave secche).

While I am very familiar with fresh fava beans (fave fresche), and prepare them often when they are in season, I had never had the chance to meet the dried kind up close and personal.

When I saw dried fava beans at the farmers' market, I knew the time had come for me to experiment with them. Melanie and Kevin, the young couple behind Shakefork Community Farm (the grain CSA of which I am a shareholder) had the fava beans for sale at their booth. Melanie mentioned that she had prepared a soup with fava beans and their hulless barley (orzo nudo, literally, naked barley), so I went home with a suggestion that sounded very appealing.

Since I learned from Melanie and Kevin to toast grains before cooking them, I have established a routine to cook barley: I rinse half a cup of barley, then put it in a skillet and warm up over medium heat, shaking the skillet to prevent the barley from getting scorched. After a short while, the popping starts. I keep shaking the skillet until the popping subsides (not all the groats will pop). I let the barley cool briefly then put it in a saucepan with 1.5 cups of water, bring to a boil and cook, covered, until tender (42-45 minutes). I prepare barley this way independently of having a recipe in mind for using it, since even simply cooked as described, it makes a nice side dish or breakfast cereal. 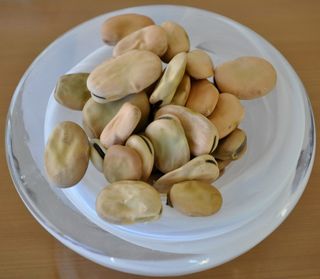 I soaked one cup of dried fava beans in plenty of water overnight (16 hours or so), then drained and removed the skin. (A longer soaking may be needed, depending on the beans, so you may want to allocate 24 hours to this step.) I have seen recipes that use whole fava beans, but I don't like the skin and so I take the extra step of removing it. This is usually easy and I accomplish it by twisting each bean to break the skin. Sometimes I use my thumbnail to break the skin and then twist.

Here is the list of the ingredients I used for the soup:

And here it the procedure I used to prepare the soup:

I made a rather dense soup, which became denser after spending a night in the fridge. Use water as needed to dilute the soup to your taste. The small portion in the photo at the top is from the leftover soup: I added to it some water while warming it up.

I liked the soup (it was actually the favorite soup of one of our guests). I will make it again. It feels quite appropriate for winter dinners.

A bit more about barley before I conclude.

Hulless (or hull-less) barley is a type of barley in which the tough inedible outer hull adheres losely to the kernel, so that when this barley is harvested, the outer hull usually falls off. Because hulless barley requires minimal cleaning, most of the brand and endosperm is left intact and the germ is present.

Hulled barley is barley that has been minimally processed to remove only the tough inedible outer hull.

Either type of barley is whole grain (integrale) and therefore a healthy choice.

This is my submission for My Legume Love Affair 27, the current edition of the popular, legume-centered event created by Susan, The Well-Seasoned Cook, and hosted this month by the creator herself.

What a fabulous blog you have! I love all the Italian recipes.

Looks really good and healthy, Simona. I recently discovered dried fava beans myself (don't like the skin, either), but they are very tasty and uniquely pretty (I shot them for the current MLLA image). Barley sounds like a really nice pairing for them.

Thanks for sharing your recipe for September's MLLA.

Very interesting about toasting grains before cooking them. ;-)

Thanks, Michele, for the kind words.

Hi Kalyn. I really love barley too and it is a great ingredients in soups.

Ciao, Susan. I saw the photo. Fava beans have an illustrious history in Europe. The next time I write about them I will say something about it.

Ciao, Paz. It is an interesting technique. It speeds up the preparation, as soaking is no longer needed and it intensifies the nutty flavor of barley.