(a dish I thought I would never make — but I did, using my homemade cheese in it) 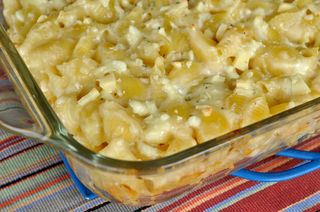 The first time I listened to my husband wax poetic about Kraft Macaroni and Cheese, I knew he had a long way to go — food-wise. He has indeed gone a long way, and I have also progressed substantially in my cooking skills, which were basically non-existent when we first met, 18 years ago. Still, Kraft Macaroni and Cheese has a special place in my husband's heart, as it speaks to him about his college days and his acquired sense of independence, which included the ability to feed himself.

Once I moved to California, I learned that macaroni and cheese is comfort food for body and soul, a dish close to the heart of many people, a theme on which countless variations have been developed. So, while I could dismiss the packaged version with a smile and a kiss on my husband's cheek, I could not subject the real thing to the same treatment: I respected the tradition and acknowledged that I would never attempt to replicate such a treasured dish.

So, when I found myself challenged, as part of the Project Food Blog by foodbuzz, to prepare a classic not from my culinary tradition and that would push me outside my comfort zone, macaroni and cheese was the immediate choice. After all, this was a dish I had many times told myself I would never attempt. Mai dire mai, as the saying goes (never say never).

Due to a number of concurrent commitments, I knew I would only have time to make the dish twice. But before I embarked in my adventure, two things had to happen. First, my husband insisted that I take a close look at a box of Kraft Macaroni and Cheese, not just the outside, but its contents. He did not ask me to actually prepare the dish, just to have a look at the components. To oblige him, I went to the grocery store and looked for the treasured item. I was greeted by row upon row of different brands and flavors, a testimony to the enduring success of the formula. I focused on the Kraft products' section and had difficulty choosing a box. My requirement was that it had to be as close as possible to the one my husband bought in his college years. In the end, I settled on the White Cheddar version1. A buyer nowadays has many options, from Organic Cheddar to Extreme Cheese Explosion (the latter a rather threatening offering, if you ask me).

The second thing was some background reading, which turned out to be difficult, as it usually happens in the case of beloved dishes with a rather long tradition. In the interest of time, and having by now accepted the fact that this would probably be only the first episode of a long-running adventure à la recherche (in search) of a recipe that truly satisfies me, I focused on four sources:

The two parameters I established before choosing a recipe were:

Even after reading the New York Times article, I went for a white sauce and cooked pasta, as in all three recipes listed above. However, in my second attempt, I forwent the bread crumb layer in favor of additional cheese.

Without further ado, here is the list of ingredients and the way I combined them to make my version of this American classic.

For the white sauce:

Follow the link to read about the long history of this traditional English cheese. The main reason for my choice being that I thought it would melt well, which turned out to be the case, so the resulting cheese sauce was nice and smooth, perfect in terms of texture.

To make the white sauce, I kind of used Debra Amrein-Boyes' list of ingredients and kind of followed the instructions in the Alton Brown's recipe. The first time, I used 1 teaspoon powdered mustard, half a bay leaf and 1/8 teaspoon of paprika, seasonings suggested by Alton Brown. The second time, I used only paprika, as in the About.com recipe.

After mixing pasta and cheese sauce, I poured into a buttered 2-qt Pyrex rectangular baking dish.

I placed the baking dish into the oven heated to 350 F and baked the first time for 20 minutes, the second time for 25 minutes.

The verdict. My husband was first incredulous, then touched by my unannounced foray into the macaroni and cheese field. He deemed both attempts better than anything he ever made for himself as a college student. He liked the flavor of both versions, but had a slight preference for the bread crumb crusted one. I was satisfied with the balance between pasta and cheese sauce, as I was looking for a quantity of sauce that would not drown the pasta. After all, I am Italian, and I like to taste my pasta. 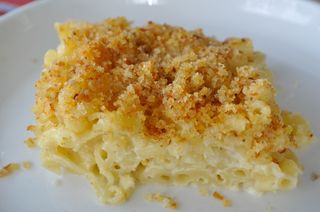 The first sauce was a bit more flavorful, due to the additional seasonings. Contrary to my husband, I preferred the version without bread crumbs (a difference of opinions easily addressed in future versions of the dish). My Wensleydale cheese does not have a pronounced flavor, so the overall quality of the dish was delicacy. I must admit that I liked it, though before saying the last word, I need to replicate the recipe using different types of cheeses.

You see, I stepped out of my comfort zone and now I am ready to push further.

This is my answer to the Challenge #2: The Classics, part of the Project Food Blog by foodbuzz. Voting started on Monday, September 27, 2010 and will continue until Thursday, September 30.

I am virtually sending to all of you a nice piece of my "macaroni and cheese" al forno made with formaggio fatto in casa and plenty of love. In the words of Debra Amrein-Boyes:

When made from scratch with your own handmade cheese, this is comfort food with flair.

1 The photo is for demonstration only: it is not an advertisement. I do not have a business relationship with Kraft or the grocery store mentioned in the post.

Macaroni and cheese reminds me of my childhood, a warm blanket and being able to cook the one dish my mom would allow me to make in our kitchen. It is THE comfort food in my books. You have achieved macaroni and cheese perfection!!! Good luck in the competition.

A great post, and your mac & cheese looks terrific. Both versions, although I might lean slightly more toward the one with the breadcrumbs.

Like your husband, I have a history with the boxed variety. In the summer after high school, my best friend and I used to eat Kraft mac & cheese all the time. Our routine was go to the beach in the morning, lie in the sun trying to get as tan as possible, then go back to her house and split a box of mac & cheese for lunch (at that time I think there was only the one kind of Kraft mac & cheese: skinny box, orange-powder "cheese," and you added milk and butter--SO GOOD). I'd actually like to make up a batch now and see if I still love it...or maybe it's better to leave things like that in the past. :)

My boyfriend is the same way...he loves the Kraft mac and cheese! Great entry for PFB....I voted for you!

YUM!!! Your macaroni and cheese looks beyond amazing and SO delicious. Good for you for cooking something that you never imagined cooking! :) Great job!

What a great idea/post! Sending some Foodbuzz ♥ your way. Hope we both make it to the next round ;-)
/Mary

Is there a piece leftover for me? Sorry I'm late to vote, but I just did. Good luck.

What a great idea for the challenge Simona! Good luck! I think I would like the one with breadcrumbs...
LL

Ciao Val. I knew that with this dish I would tap into dear memories. I love this idea of having one special comfort food, the one dish that can cheer us up no matter what is going on in our life. Thanks for sharing your memory and also for your kind words.

Ciao Lisa. You are making a good point about leaving memories untouched. I think that at a minimum you'd have my same difficult: which kind to buy? I think this would be an interesting research: what foods we remember from our early life and loved then are still made and how do they compare? I'll think about it. I am glad you enjoyed the post.

Thank you so much, Mary!

There is always a piece for you, Ivy. Thanks!

Thanks, Nate, for the vote and the advice.

Thanks, Lori Lynn. It looks like the one with the breadcrumbs has the highest number of preferences.

Awesome!! Looks great- I cast a vote for you.

Well thank goodness he preferred yours to the Kraft one! There would have been trouble otherwise. I love macaroni cheese, although it isn't something I grew up with. I like adding some caramelised onions and gorgonzola to my bechamel.

Thanks Jasmine. Now that I have mastered the basic recipe, so to speak, I am ready to try variations and caramelized onions sound quite appealing.

Ciao Alicia. I like the idea of adding gorgonzola to the sauce. One of these days I will try to make gorgonzola at home.