Two years ago, I wrote a post about making chicken stock according to a recipe by Julia Child. I have been using that recipe ever since, every time I roast a chicken. After degreasing the stock, I freeze it and then use it for various purposes, like making vegetable soups.

Two precious findings at the farmers' market suggested that I make leek and potato soup. I had seen a recipe for it in "Julia's Kitchen Wisdom," the same source of the chicken stock recipe mentioned above, and decided it was the right time to try it. Child describes this as one of the basic — "primal" — soups.

Seeing leeks at the market surprised me, since this leek lover knows that the summer crop usually becomes available later. The farmer was also surprised about the early crop, but since the leeks were ready to be harvested, he did and brought them to market. Delighted, I bought two (they were not thick, but quite long).

When I saw a basket of a variety of potato called All Red, with pink flesh, I had to try it. The color is beautiful. Back to the recipe, it calls for 3 cups of sliced leeks (white and tender green parts), 3 cups of peeled and roughly chopped "baking" potatoes and 6 cups of water. I used the following ingredients:

I put all the ingredients in my soup pot and brought to a boil, then simmered, partially covered, until the vegetables were tender (22 minutes). I let the soup cool slightly, then puréed with my immersion blender. I added sea salt and freshly ground black pepper according to my taste. When dinner time rolled around, I reheated the soup and served it with freshly grated Montasio cheese of my own production (formaggio montasio grattugiato). The cheese is sweet, since I aged it for a relatively short time: it paired well with the soup's flavor. 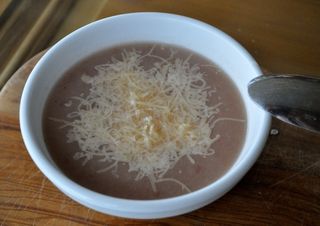 From the photo, you can see how the potatoes influenced the color of the soup. What you cannot gather from the photo is that it was really good.

This is my contribution to the fifth annual Julia Child Birthday Celebration, an event created and hosted by Lisa of Champaign Taste.

These potatoes do add an appetizing hue to the soup. I have not seen them around and about, but you never know....

Look at those marvelous potatoes! I love those, and the color they give to the soup. And a topping of your own special cheese! Beautiful. Thanks so much for adding color and flavor to the JC birthday celebration (my post went up just now).

Ciao Val. I hope you find them, as they are really nice, besides being good.

Ciao Lisa. They are really good looking and make a soup of an unexpected color. You are welcome: it's always a pleasure to participate.

Tasty looking soup, Simona. I missed the farmers market on Saturday, so I missed those beautiful potatoes!

Thanks, Christine. I hope there will be more in the coming weeks. I would like to get more.

I love leek and potato soup, but during the summer I prefer the cold version of it! The potatoes look very interesting, never seen them before. I also found leeks in the farmers market this week!

Hey I have never seen such colored potato before.You soup has also some new ingredients and I will surely try it in my free time.This soup's flavor seems tasty.

Hi Jo. I can imagine going with the cold version when the weather's hot. We have cool evenings here, so warm soups are welcome.

I also had not seen up close and personal pink-fleshed potatoes. I hope other people find them too.

I was wondering, can you use regular potatoes on this or does it need to beed red potatoes?.. it looks very delicious, my kids are very picky and if they see red potatoes they wont eat it lol..