tagliere / cutting (or chopping) board 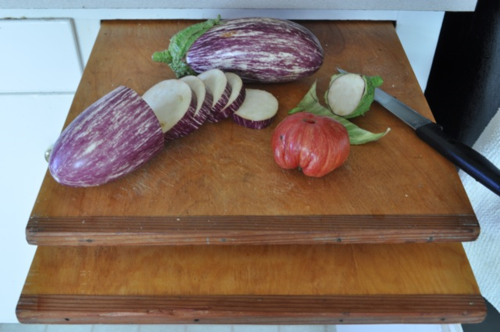 In a recent post on mezzaluna, I showed the cutting board at my parents' house, and Lisa of Champaign Taste noted that it looked "like it was meant to be pulled out from under the counter." If I remember correctly, that cutting board was part of the kitchen table in the apartment where we lived until I was about 16. The kitchen furniture was custom-built when my parents moved into the apartment, their first after getting married. That table had two other items you could pull out: spianatoia e matterello (kneading board and rolling pin).

In my current kitchen, there are two taglieri that I can pull out of the counter like drawers. I can't imagine doing without them. The top cutting board is the one I use most often and is dedicated to vegetables. The bottom one is reserved for chopping chocolate or nuts and for mixing a dough for which I don't need a lot of space, like in the case of my biscotti.

Both boards were recently refinished by a thoughtful and skillful friend, and they look beautiful. The eggplant you can see on the photo is called Listada de Gandia, a recent find at our farmers' market. It is described as Italian on several sites, but the name is not Italian. Gandia is a Spanish town on the Mediterranean Sea, and listado means striped in Spanish, so the name can be translated as: striped [eggplant] from Gandia. 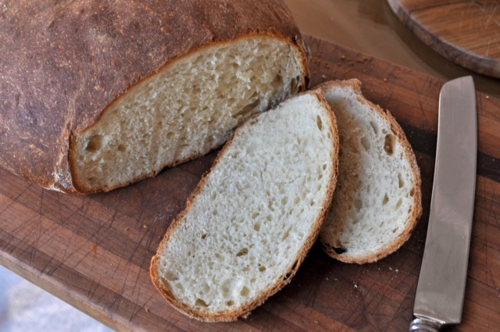 There is no such thing as having too many taglieri in the kitchen (cucina), I think, so I have three more, all made of wood, that I use in various ways, including as photo props. The rectangular one was handmade for us: a really nice gift. I use it mostly to cut [my homemade] bread (tagliare il pane). The bread in the photo above includes whey from some of my fresh cheese as one of the ingredients.

The irregular-shaped one is made of olive wood (legno d'olivo) and was given to us as a gift by an Italian friend. I love to look at the lines of the wood. I like to use this board to bring to the table formaggio fatto in casa con le pere (homemade cheese and pears). 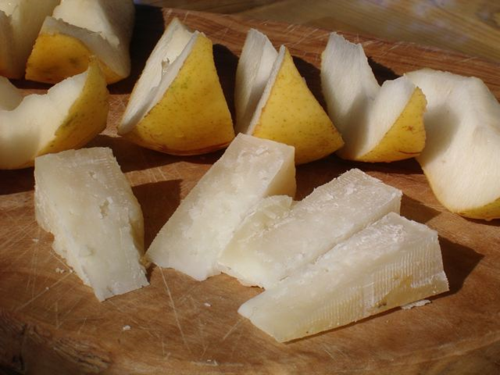 Plastic and silicone cutting boards are handy too. I have two small ones made of recycled plastic and use them as support for cheese that is being aged. So, I have a use for all types of cutting boards.

Posted by Simona Carini on August 24, 2010 in Kitchen Item | Permalink

You're right -- "There is no such thing as having too many taglieri in the kitchen (cucina)." I would love my own custom-built one, like the one in the photo. Beautiful!

What would I do without my wooden cutting board to save my knives:D

I would love this in my kitchen, so handy. I so agree one of the most useful kitchen tools and you can never have enough. I have a few that I have had for years and could never part with.

Hi,
i do agree with you on this...great site you have here...

Ciao Paz. They are indeed convenient and the kitchen look better, since they are stored in their place.

Thank you for your article, and your site also

You are welcome, Peter. I am glad you enjoyed it.